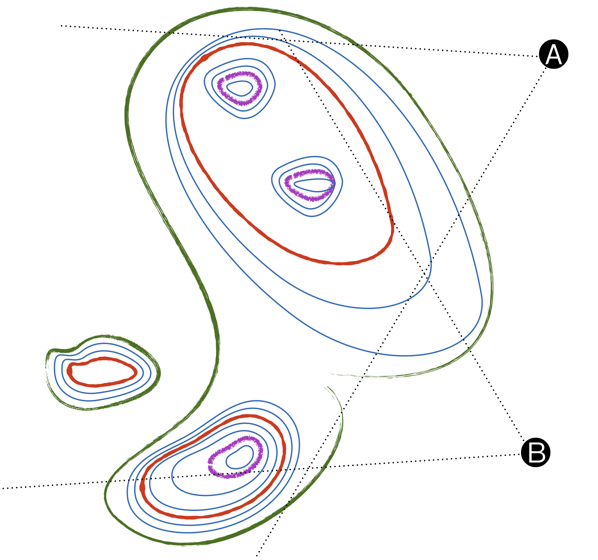 This is the third, and final for the moment, post looking at the Apex/Flexuous/Ystwyth curve(s) and it is as much of a connection post as an extension.  So it links with weak signal detection and also human perception and knowledge. The latter I will return to tomorrow when I update the uncertainty matrix which goes back over thirty years in my thinking.  It also continues the development of a wider theme of democratising as well as naturalising sense-making which is a bit of an obsession for me.  One of the ways we work here is the more like this, fewer like that approach that I outlined in my … intire of it self post last week.   That showed a two-dimensional landscape with a series of movements, shifting to the adjacent possible, as an alternative to the doomed attempts to constantly define an idealistic future statement.  What I want to do is to introduce the idea of perspective and also scale to that.  Different perspectives, different starting points profoundly influence what we see,

Just as a sidebar here, if anyone mentions the parable of the blind men and the elephant expect some comeback.  I first heard that at a conference in Sri Lanka way back in 1978 and I found it deeply patronising then.  I hasten to add this is no disrespect to the Hindu or Jainist origins but to how it has come to be used.  Something similar has happened in the co-option of Buddhism by some in the West to authenticate patriarchal models of leadership, something I call faux-Buddhism but that is for another day.  My objection is when the implication is that someone (generally the one using it) has some higher state of consciousness or superior perception to which you the respondent should aspire, and in general for which you pay and the payment may not just be money but virtue and the soul are also at stake

So let’s take the picture that opens this post which I there together quickly on keynote this morning.  It is a contour map in form and has three hills, one outlier, a twin peak, and a subsidiary peak.  There are three things I want to pull out of this:

I could go on but all of this is pretty self-evident and that is the point.  If we are looking for something that will democratise and make visible patterns then simple maps of this nature drawn on the landscape metaphor with which all humans are familiar.  One of the ways we use the maps is to only present them at a level appropriate to the decision-maker.  If you take the more like this, fewer like that question and precede it with what can I do tomorrow to create …. then 1he focus is on change through action at a level of competence to engage, it is not about saying what other people, up or down the hierarchy should do.

So for some people the pattern of the green may well be enough, you don’t need the detail.  An example here is mapping of mountain areas in Britain where I carry a 1:25000 OS Map which shows absolutely everything and a Havey’s 1:40000 which only shows what I need to know and whose symbology makes it easier to navigate.  Adding semiotics to maps is one the things we are working on so watch this space – moving well beyond contour lines and using the metaphorical equivalent of geological survey students (you have to walk in straight lines regardless of terrain noting rock types, etc to impute a three-D version of what lies beneath you) to augment maps in real-time.  I talked a few days ago about drawing on geomorphology so expect future posts using glacial moraines and fluvial deposits as metaphors!

So in sense-making, we need to pay attention to elevation, but also orientation and contrast.  Those three become the foundations for the way we represent complex datasets in the future and of course, abstraction is one way to achieve all three.

Yesterday’s post took around 18 hours of elapsed time interspersed by a dashed visit to ...

l was thinking about Max earlier on today.  I had planned to post an update ...