I managed my walking quota for the weekend in two slots, the first in South Wales and the second in the Cotswolds, both around six miles in length.  Friday night had seen me drive down to watch the Blues play the Ospreys in Swansea in sub-zero temperatures, Saturday there was an international so I choose to stay at Moorshead Farm B&B that night, which would allow a coastal walk the next morning before making Cardiff for a 1430 kickoff.  For those interested in the Rugby aspects of this weekend wait for my column on Cymru Culture which should go up next weekend, other than regretting our lack of initiative in using the food poisoning tactic first pioneered by the South Africans I will say no more at this point.

I have no regrets about staying at Moorshead.  Its up there in the all time list of good places to stay, and the best B&B I have ever experienced.  Comfortable, friendly, outstanding breakfast, quality all round at a more than reasonable price.  I was also scouting for my 2014 Dragons Tail Walk (yes it has a name, the tail is the Dee extension) and I will book one of their cottages for the Mumbles to Chepstow section. 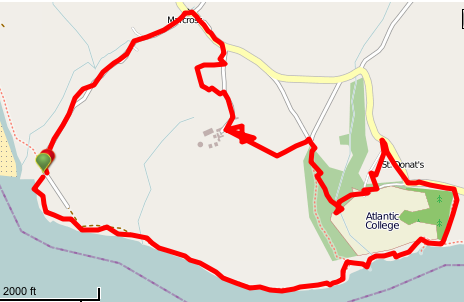 I left the comforts of the farm with some reluctance and headed down to Nash Point.  The Sun was out, and I was more or less directly north of my escapade with a landslip on the other side of the Bristol Channel which acted as a salutary reminder of the need to take care in slippery conditions.  The walk along the coast was spectacular for its lighting effects.  The tide was out and this is Jurassic territory so the patterns of the shore created a wonderful photographic opportunity (see intro picture. From there past lighthouses and fog horns I reached Atlantic College and turned away from the coast to follow a mix of country lanes and muddy fields back to the car.   With more time (which but for the breakfast I would have had) I would have extended the walk to Llantwit Major which is where I would like to live.  A short train ride to Cardiff and coastal walks in abundence.  All in all a good outing and the full photo set can be viewed here.

Today was not a solo walk, but was planned with Peter and Julia following our decision to abandon the Thames section which was our original intention.  Flood Warnings and a lack of clarity about the state of the Eton Dorney diversion meant that we decided to do something more local, and based on the Green Dragon in which we had met on the Friday. This was a similar length, but thanks to the Chalk considerably less muddy.  We parked in the pub car park, Julia have obtained permission the day before in return for a promise to end with a pint and bowl of chips.  At the start of the walk we had sunshine and some spectacular skies.  A quick glance at the photo set will show them.  We went downstream before heading cross country on an ancient roadway to a now deserted medieval village evidenced only by field markings.  From there a gentle stroll took us to Seven Springs which has some claim to be the real source of the Thames as the River Churn is further from the mouth than Thames Head and it flows all year.  Adding the 14 miles would make the Thames the longest river in the UK, taking over from the Severn.

A minor climb from there, but by now the sun was lost to cloud.  However the villages of Coberley and Cawley more than compensated.  Including a new house being built which the custodian told us is to be water powered. It looks spectacular and must be costing millions, but all Cotswold Stone so it will nestle into the valley with ease.

Cowley Church and a health spar signified the approaching end of the walk which passed ornamental lakes and then climbed to the pub.  Removing muddy boots we headed for the bar, an outstanding pint and that promised bowl of French Fries.  Its the last chance to walk together until the 22nd when we should do the section of the Thames from Maidenhead to Windsor and beyond if anyone wants to join in they would be welcome.

I managed to get back to daily blogging in November, albeit with the odd retrospective ...

The many & devious sins of Atomism

Having sounded off yesterday about relativism I thought I would pick another bete noir today, ...