In the first of these articles, I looked at Borton’s W³ question from the 1970s and more recent adaptations (with varying degrees of acknowledgment of their source) by Driscoll, Eoyang and Liberating Structures.  I’ve found all useful in various ways but I have concerns based on their heavy reliance of workshops (a general concern by the way to which I will return as it makes scaling very difficult and is too subject to facilitator bias), and what seems to be a linear approach – the question assumes a common context in most of the uses that I have seen or read reports of.  In effect, the facilitator of the process starts with perceptions and attempts to move to knowledge.  This is an incomplete reversal of the Cynefin perspective where ontology (the nature of what is)  is meant to proceed epistemology (how we know things) and radically reduce the dependency on perception.

The nature of What, remembering the meaning of Wherefore is an ontological question, not a matter of shifting perception to agreed knowledge. However, most consultancy approaches start with perception and attempt to gain knowledge of the way forward.  Now, this can work, but to my mind is lacks energy efficiency and over privileges the role of the facilitator.   As in Rugby matches (sorry this is a sore point on the day I am authoring this) if you have an experienced referee all goes well; if you get an inexperienced one then angling from the side at a scrum goes unnoticed and they lack the confidence to give a penalty try for a deliberate knock-on.  A good facilitator can usually get things to work well however and a lot of these methods sell based on the work of the originator – then things get industrialised and we start to get failure.   To give two examples:  David Cooperrider’s work on Appreciative Inquiry as and is excellent but the industrialisation into always look on the bright side of live platitudes is not; Clayton Christianson’s work on disruptive innovation was brilliant but the consultancy practice that arises less so. 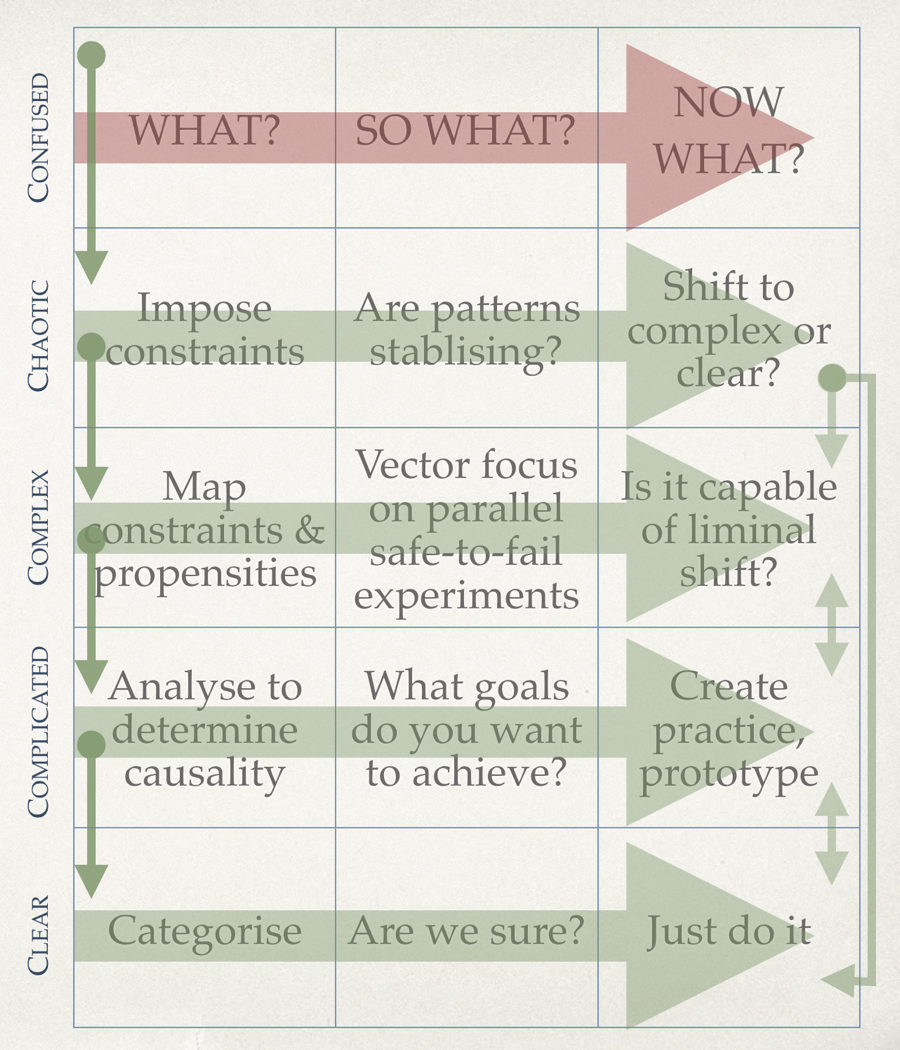 So I decided to take a look at the W³ question through the eyes of the Cynefin framework and came up with the illustration to the right.  I’m not sure it is right yet, so consider this a work in progress.

As I have already implied, to simply ask the W³ question without first getting the context is in effect sitting in disorder (or confused which is a current idea for renaming that I am toying with).  This is shown as a red arrow.  The suggestion is an alternative staged approach in which the What question related to the nature of the system before any move to the right is essayed.

Now note as you go down the scale things may fall out for the right shift, others may carry on down for diagnosis.  At any stage, you may shift – something that requires more arrows!  One of the functions of Cynefin is to deal at the right level of granularity so a sifting takes place as you go through the chaotic-complex-complicated-clear sequence and you may end up with multiple horizontal paths.

As such we reduce the chance of error (Disorder, or confused) and reduce the energy cost of change.  We can also potentially automate the selection and allocation of tasks in a distributed model.

As I said early – this is not complete, I am going to experiment a little.  It is part of the project I am engaged to map Cynefin to other methods and tools (my own version of ‘So What”) and I need to try it out a few times so it will change,  Anyone else is welcome to experiment and reports would be appreciated.

The Letter W in the text is by Leo Reynolds discovered in Flickr  as is the banner picture, both are used under the terms a creative commons license  I’ve used the same pictures today as yesterday, but reversed their order

We tend to read ‘wherefore’ as a question asking where something is, but the meaning ...

Going on a journey

With the odd exception, I always enjoy a long train journey.  In the past month, ...