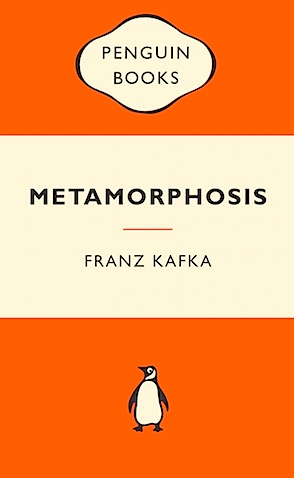 One morning, upon awakening from agitated dreams, Gregor Samsa found himself, in his bed, transformed into a monstrous vermin

Probably the most famous opening lines in literature. I fell in love with Kafka when I picked up this Penguin edition as part of a school prize back when I was 16 and I’ve returned to it many a time since. I’m also pleased to say that my daughter inherited the liking. I bought her the book some eleven years ago just after I had left IBM and we were together in New York. She was younger than I when I first read it so it was a risk, but one that paid of, although I think she prefers The Trial.

I’ve never been fully consistent in my interpretation of the book which is one of its pleasures. These days I favour the idea that Grete, through her violin represents the metamorphosis; she is the butterfly with an essential message of hope. But my teenage self took a bleaker perspective seeing it in the context of the dehumanisation of work and the tyranny of mammon, but in those days I sought an economic explanation for everything! The title of this post reflects a more elderly interpretation and a greater sense of wonder that can come with age. I also have to express regret for not speaking, or at least reading German. My love in literature has always been Katka, Hesse, Mann, Grass and others and I know my understanding is impoverished by having to read them in translation.

The reason for posting this is a coincidence. My article on exaptation opens with that quote as exaptation is a form or transformation, a loosing of form to gain some other state. So it was on my mind on the flight to Auckland yesterday and while I use music to aid concentration while writing articles, I watch back programmes on the iPlayer to deal with email backlogs and one that was about to run out was Filmmaker David Malone’s excellent documentary on metamorphosis. As it happened he went beyond the basics of tadpoles becoming frogs but also examined the way in locusts move from solitary feeding to swarms (you can achieve the result by tickling their rear legs as it happens) and also the way in which humans are the ‘authors of our own transformation’’ we don’t have to grow wings to fly we can create aeroplanes. Equally a model of flight on a computer does not create a bird, but it allows us to create a theory from which we can imagine something that is not a bird but achieves the same purpose (that one from Anil Seth via Radio 4). David Malone has another take on the final scene of Metamorphosis; being transformed into vermin, forced out of his body, means that Gregor is able to listen to his sister’s music for the first time.

There is a general less for this, which builds on my many earlier posts on abstraction, we have to detach ourselves from current perspectives to see the world in a different way. Symbolic language, aesthetics (and of course opera is the supreme form here) all allow us to see potential for difference. Without those abstracts, by restraining ourselves to that which is immediately concrete or obvious, what worked for us the last time, we restrict ourselves to the ordinary and are impoverished in consequence.

I’m late, possibly too late, in completing an article on exaptation in human systems. ...

Yesterday’s post was about the need for abstraction, something I recognise years ago when ...