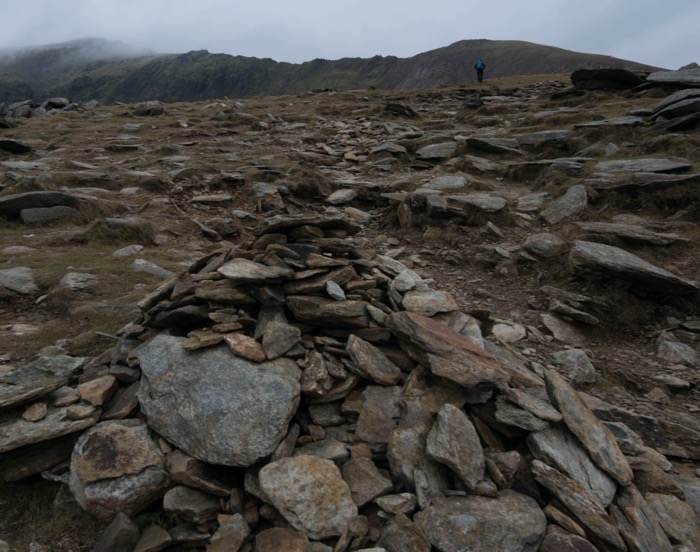 In this final section, I want to bring together the various thread into what I called naturalising sensemaking.  I define sensemaking as how to we make sense of the world so that we can act in it and this definition carries with it a sense of sufficiency and this also incorporates a sense of how do I know when I know enough to act.  It also has a sense of flux I talked about in my last post.  The naturalising element relates to the philosophical idea of rooting the way you think about problems in the natural sciences.  Remember it is only fairly recently that natural philosophy was natural science! In the West, issues start to arise with Descartes and the cartesian split between the body, which was subject to science and the soul which belonged to God.  Midgeley and others have argued that the reason for this split was to create a space for science that would not be subject to the inquisition.  Remember that Descartes was born in 1596 four years before Bruno was burnt at the stake and he was a teenager during the trial of Galileo.  You should always check the historical context before reading Philosophy, or Theology for that matter.  His contemporary Hobbes who took a materialist perspective in a near-constant battle with Descartes has to be read in the context of the disruption of the second English Civil War.

I digress, the reason I developed the theory and gave it that name was to deal with the inherent uncertainty I had lived through, both within the World Council of Churches working in Australia, African and Latin America, including early work in Liberation Theology and then in a series of business roles starting in HR and Training, Moving into Finance, then Decision Support Consultancy, General Management and Strategy before moving into a research role when IBM took over DataSciences.  I do get amused when people accuse me of being academic given that most of my life post-graduation has been involved with the many real-life complexities of both making difficult decisions and building systems to help others do the same.  But I will confess to still being proud of what was meant to be a satirical attack at one DataSciences management conference.  I had created the Genus programme and it was turning the company round in terms of sales and reputation.  The Marketing Director famously said I have no idea what this is all about but people want to buy it and then he was followed by a sales manager (and this is the satirical comment I’m around of) called me the thinking woman’s, thinking person.  For the non-British (or anyone much younger than me) that was a reference to Frank Muir challenging Joan Bakewell the thinking man’s crumpet and the fact that uniquely as a general manager in DataSciences I had an all-female management team.  Remember this is over two decades ago when casual sexism was the norm and few if any women were ever promoted.  My Director called a management meeting in a sleazy pub in Kingston and went ballistic when I walked out the minute I realised we were in a strip joint.  I still remember a very well know comic staggering around drunk at a management conference (he had been the after-dinner speaker was truly terrible) demanding to know where his woman was on the basis that procurement of casual sex was something he expected for turning up and speaking.

I just digressed again, sorry, will try not to do that again.  The point I am trying to make is that dealing with uncertainty was a key driver for the development of the theory and when I got the space following the IBM take over I was able to shift into a research role and take up academic work for the first time since my early twenties.  I hasten to add that I had always been a generalist and had read widely so that helped.  It was not an abrupt change, more a chance to indulge without the monthly grind of targets, appraisals and the like.  Once I was working in the IKM I the monthly routine was a flight to Boston and a chance to visit the MIT bookshop so things progressed apace.  By coincidence, the MIT bookshop was the subject of my tenth post last Christmas so that is symmetry! 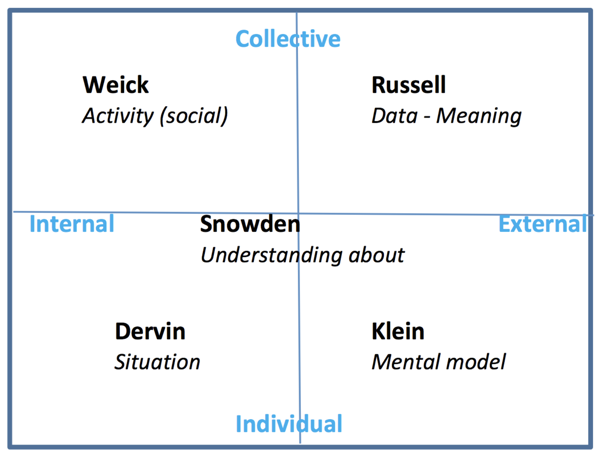 I can’t remember when I first talked about sensemaking but the use is as old as Cynefin so a couple of decades at least.  I used the hyphen from the start as I wanted to distinguish what I was doing from Weick while paying hue homage for this work.  I met and worked with both Gary Klein and Brenda Dervin and the latter wanted to set up a three-way debate with me, her and Weick but the great man didn’t take up the offer.  That said one of his former students wrote an interesting piece on the differences and similarities between our work.  More recently my work has been recognised as one of five distinct schools of sensemaking, or sensemaking if you go with Weick’s neologism

Two sources are relevant here, the first from Peter  Haywood Jones a two by two matrix shown above and I quote:

Weick’s focus has been organizational activity (collective), and the location of sensemaking is internalized as representation of collective meaning. Dervin has a clear individual and hermeneutic approach, on the individual’s situation and their internalized subjective experience of it. Klein’s focus is the individual mental model (frame) applied to an external context or activity (how external data is represented). Russell’s information theoretic view establishes sensemaking as a collective location (an information world) largely in the service of interpreting external data. Snowden’s more evolutionary model considers sensemaking a knowledge production activity, using data toward a shared understanding of problem areas (which I call “understanding about” as a unit of analysis).

Now it’s nice to be at the centre of that and it was nice when Brenda Dervin, who I admire greatly both for her work, her personal courage and the long list of people and things we agreed we disliked over a meal at our first meeting in Ohio, also recognised the different approaches in this summary of the field.  This recognition is important for the whole Cynefin network and it reflects the work of its many members over the years, not least Bonnie Cheuk a co-author with Brenda of the Oxford reference and long term friend from our early days in knowledge management.

So naturalising sensemaking for me encompasses the early work on knowledge management, narrative-based sensemaking and the more recent work on anthro-complexity.  Indeed Cynefin itself is defined as a sensemaking framework.  The distinguishing feature is the use of natural science as a constraint and that will be the subject of tomorrow’s post.

Two years ago today I set off up the Rhyd Ddu path to the summit of Yr Wyddfa and then came down the Snowden Ranger to meet Iwan who was waiting in the car part – we went out for a great meal on Sir Môn at the White Eagle, making the most of its association with the Prince of Wales.  Its a good route but not my favourite approach.  The other and better approach is to follow the miners track that sites between Yr Aran and the south ridge, then up the south ridge which has some of the best views of the summit and the airy Bwlch Main which under conditions of ice and snow is a significant undertaking.  Then before you reach the zig-zags that take you down to the Snowdon Ranger Youth Hostel you turn right over an obvious style and track through some fascinating mine workings to the car park.  Last time I did that conditions on the top were very windy and halfway down I came across a couple who had ascended the Pyg Track.  There were scared to return the same way so set off for Llanberris but made a bad turning and were now halfway down the wrong side of the mountain.  I offered to take them back to the car and they came with me for the next couple of hours and I realised how unused they were too long distances.  The £10 they insisted on giving me went into the Mountain Rescue Collection Box.  That was in March this year and the conditions were brilliant until I got to the summit

The trip two years ago again saw bad conditions on the summit (shown in the banner picture looking north) but I never get bored with Yr Wyddfa no matter what route or what time of the year I go up there.  The cafe, however, is never open when it would be useful and as the highest mountain south of Scotland it attracts a lot of poorly equipped tourists.  I’ve called out mountain rescue three times to inexperienced people who were either injured or suffering exposure.  The opening picture is of a cairn with Bwlch Main in the background.  A cairn is not a wall but it is a point of navigation, and the feeling for security that comes from finding one on bad visibility should not be underestimated.

I think a lot of people don’t realise how novel the complexity stuff still and ...

The essence of a naturalising approach to sense-making is to use natural science as an ...