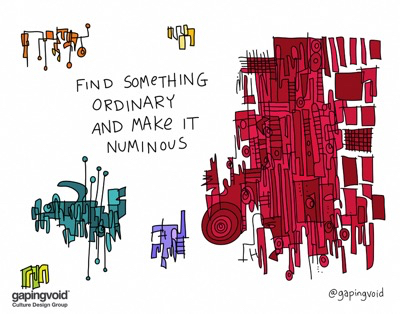 I first came across the idea of the numinous when I picked up a second hand copy of Rudolf Otto’s book The Idea of the Holy which I picked up on one the Ampleforth retreats I mentioned in a previous post. Otto saw the idea of holy as conveying moral perfection, but he saw the numinous as more than that, a condition sui genesis that cannot be taught but has to be invoked; it has a sense of mystery which is itself inexpressible. It carries the sense that there is more to life than my mundane interests. Even the self styled new atheist Hitchens used the term favourably. To know something other than the material sense does not of itself imply a religious belief. The sense of wonder, of something other than ourselves, is key to ethics. Now that returns me to an earlier theme about the importance of children’s literature to settling the patterns or dispositions of ethical behaviour. A good example of this is the classic Wind in the Willows which conveys the values of Edwardian England in a gently unfolding of foolishness redeemed, sacrifice for friendship and the fulfilment of obligation. Now in the most of the popular adaptations of the book the critical chapter VII titled The Piper at the Gates of Dawn is omitted; to my mind a tragedy. For those unfamiliar in stands between the point at which our anti-hero the Toad has been condemned to 20 years in goal for a series of car thefts and reckless driving. I’ll quote the final two paragraphs of chapter VI to make the point:

‘Oddsbodikins!’ said the sergeant of police, taking off his helmet and
wiping his forehead. ‘Rouse thee, old loon, and take over from us
this vile Toad, a criminal of deepest guilt and matchless artfulness
and resource. Watch and ward him with all thy skill; and mark thee
well, greybeard, should aught untoward befall, thy old head shall
answer for his–and a murrain on both of them!’

The gaoler nodded grimly, laying his withered hand on the shoulder of
the miserable Toad. The rusty key creaked in the lock, the great door
clanged behind them; and Toad was a helpless prisoner in the remotest
dungeon of the best-guarded keep of the stoutest castle in all the
length and breadth of Merry England.

In Chapter VIII Toad escapes thanks to the kindness of the Goaler’s daughter and the book moves at a faster pace to its conclusions. But in Chapter VII the Mole and Ratty, searching for the lost son of Otter find him on an island in the river find in the presence of Pan “nestling between his very hooves, sleeping soundly in entire peace and contentment, the little, round, childish form of the baby otter.” This is a magical chapter in its language and imagery. The Rat whispers “‘This is the place of my song-dream, the place the music played to me”. The Mole “ felt a great Awe fall upon him, an awe that turned his muscles to water, bowed his head, and rooted his feet to the ground. It was no panic terror–indeed he felt wonderfully at peace and happy–but it was an awe that smote and held him”. The transition is important as it places the animals in the numinous, that which cannot be reduced or rendered mundane. now this is pantheism which still underlies a lot of human experience. These last few days I have been in my Cynefin, the mountains, valleys and water of Snowdonia. I have had that sense of wonder that comes encounters with nature as it does with music. It’s not an experience that can be reduced to some utilitarian calculation: it just is. One day I walked with good friend, sometimes we talked but often we were silent; only possible with the best of friends.

Tomorrow is the last post in this series and time to pull together the various threads.

In my opening post I mentioned integrity as one of the key words I wanted ...

Writing this series has been an interesting process - a few of the posts were ...