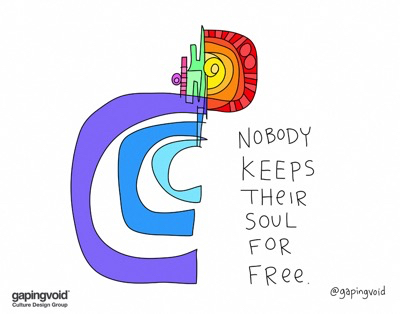 One of those quotes from the bible that most people are, at least in the western tradition, aware of comes from Mark 8:36 “For what shall it profit a man, if he shall gain the whole world, and lose his own soul?” Fewer people recall the context with ease – its the point where the ‘betrayal’ of Judas is about to result in the arrest of Jesus. It is significant in that it links to ideas of grace and sacrifice, both of which have secular significance. I’ve mentioned both in this series but expect more in the future.

Now to be clear I am not using soul here in the sense of some will o’the wisp thats animates the corporal and material, more in terms of its wider definition (quoting here from Merriam-Webster: a person’s total self, an active or essential part, a moving spirit,the moral and emotional nature of human beings, the quality that arouses emotion and sentiment, spiritual or moral force. The essence of all of this is that is more to being human that simply satisfying material needs for survival. Our sense of empathy, the ideas that underly charity, the use of art, the sense of something other than ourselves; these are all art and parcel of what it means to be human.

However with life come habits of personal behaviour, was of working and thinking that become patterns we can’t escape. At a personal level I had been trying to loose weight for most of my 50s but constant travel got me into the habit of comfort food on arrival at yet another hotel and the Chinese take away in Marlborough had a lot of one last time visits. It took the diagnosis of Type II Diabetes to trigger a break in those habits; I now say its the best diagnosis I ever had as I rediscovered many of the things I had loved and was lucky enough to capture it early enough to reverse it. We are not in detox January and we know an absolute change of that period is sufficient to break a pattern of approaching alcoholism or at least dependency. It’s not a rational choice, most of the time habits have high utility as they reduce the burden of choice, but they also entrain those choices. At University we had an annual Chaplaincy retreat to Ampleforth Abbey that provided a reset. In my business unit in DataSciences days a one a year trip to holiday cottages with two days of fun followed by two days of where are we, where are we going provided a form of ritual disruption of habits – a chance to make changes.

I’m pretty convinced that ritual disruption of day to day habits is critical to health. It doesn’t mean you change per se, but you have a chance to examine those patterns. Personal empathetic confrontation can also be key. It’s very difficult to say (in effect) I know this is wrong but I think its legal so I’m doing it anyway if you are talking face to face, but a lot easier if you succumb to the basic cowardice of an email. The depersonalisation of communication through text means that bad habits can easily become worse as its too easy to avoid disruption – habitual rudeness is a major issue in the modern world and adding the odd smiley face doesn’t really make much difference.

Then on a wider level we have what Bourdieu called habitus, the idea that in our social interactions we constantly make our own habitats while adopting different identities and roles. Context is dynamic but patterns easily form. A lot of people have suggested that SenseMaker® is an encapsulation of the research that Bourdieu advocated and I agree with that. It is a way of measuring, or at least indicating the stable patterns (I call them tropes) of peoples day to day existence. By enabling a decision maker to see outliers, to read stories, to confront how their interpretation differs from others; all of those capabilities are the equivalent of the retreat or the disruptive diagnosis – a chance to re-examine where we are.

And of course art is disruptive, the reason for my using Gaping Void material in this series. Ethics without disruption is too easily perverted: the banality of evil

The banner picture is from the summit of Moelwyn Mawr yesterday, the clouds parted early afternoon after a wet morning – perfect conditions for the landscape photographer and it was a good walk as well! Very slippery as I discovered to my costs twice.

Some years ago I was at an Academy of Management meeting in Washington DC to ...

In my opening post I mentioned integrity as one of the key words I wanted ...