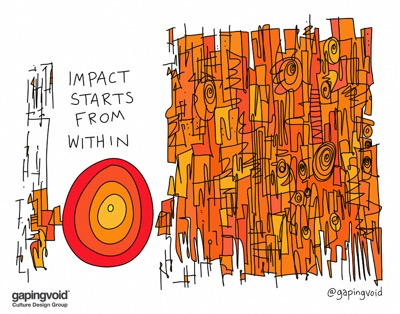 As you may have gathered over the first few posts in this series I’m not seeking to solve the meta issues surrounding ethics and aesthetics but I am trying to inch my way to a generic approach that avoids the Scylla and Charybdis of accepting the norms or creating rules; in my lexicon extreme moral relativism and absolutism have a lot in common. In this post I want to use a case to illustrate ways in which awareness of ethics can be achieved within leadership groups through a key Cynefin principle namely descriptive self-awareness. The project in question goes back to the final days of IBM when we were in the transition period between Lou Gernstner and Sam Palmisano and I was committed (with the support of Sharon Darwent) to run a one week training course for senior leaders. Lou had a top 300 and every six months 30 joined and 30 left. I was put in charge of one of the cohorts of 30 to both teach complexity and use a narrative approach. The event was notable for several reason not least was Lou’s introduction. I gave him the barest of introductions to complexity theory but he was able to communicate its importance in his opening lecture. He also gave a clear message that they had all got to this level in IBM by achieving their results, now the next and most difficult stage would be proving they could do that and act for the greater good. My instructions from Lou and the Head of Executive Development (my sponsor) was to provoke, which I did but half way through I was told that said Head of ED was handing in her resignation to join Microsoft that afternoon and didn’t expect to be around for long – she was escorted off the premises the same day and I lost my top cover! There are a lot more stories about that week but let me first describe how we set it up (and then what went wrong, in part).

Now note that at no time did the facilitation team interpret the material, challenge the leaders. We set up a process by which they saw themselves as others saw them, through the specific actions they had taken rather the values they espoused. They learnt in a peer group with light facilitation and some took on the idea for continuous checkpoints – something we can now do a lot better with the 360º capability in SenseMaker®

I’ve used a case in into days post – tomorrow back to Aesthetics and a little more theory.

I’m not sure when, or why, my life long dislike of Utilitarianism started but I ...

Yesterday’s post looked at a case in which narrative techniques were used to present individual ...