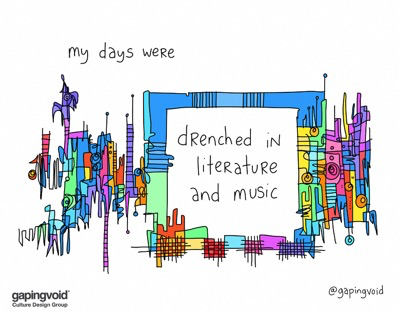 Art has many roles in human evolution but one of the most important is to teach values and trigger people to think differently. If you want a simple illustration of this look the attention brought to the Spanish Civil War by Picasso’s Guernica completed in 1937. There were photographs, there were eye witnesses but this powerful abstraction with the dominant figures of the horse and the bull, both key images in Spanish Culture, had an impact which continues to this day. It became a symbol for the end of the Franco regime and inspired may works in its own right. Abstraction often gives more meaning to reality than reality itself – and remember art (abstraction) predates language in human evolution. I challenge anyone not be be moved by Beethoven’s only opera Fidelio and the transition from Gott! Welch Dunkel hier! to Heil sei dem Tag! Mindyou there is always a danger in that you might take the wrong message – too much opera and you might start to think that the only role of a baritone is to stop a tenor and soprano being united in true love. Art is not inherently good either, it can be used to express the full gambit of human emotion including the futility of resistance to authority as well as to inspire rebellion. It is a part of what we are, our being as becoming and we need to acknowledge it as such.
I grew up in a household where books were a part and parcel of daily living. My mother, an agnostic, had a copy of the Bible designed to be read as literature which was as much a part of my childhood as Winnie the Pooh and Wind in the Willows. She was firmly of the opinion that if you didn’t know your Bible then most of European Literature would be closed to you. We also had Nye Bevan’s In Place of Fear and a wealth of Steinbeck, John Masters and many others. We had books for children, but we were also expected to have a child’s perspective on adult literature. Then we also had the library, where I was often left as a child during Council Meetings with a freedom to explore. I discovered the Gunner Asch series which, aside from being very funny, gave me a different moral take on the role of the Wehrmacht in World War II. Everyone should read his Officer Factory for a dark satirical take on Arendt’s famous Banality of Evil from which I quote below

The essence of totalitarian government, and perhaps the nature of every bureaucracy, is to make functionaries and mere cogs in the administrative machinery out of men, and thus to dehumanize them

Checking people’s books is a key aspect of any sanity check. I instinctively do it in people’s offices and even more in their homes and you learn a lot, not just from the titles but from the clues as to which are the most loved and treasured. A household where the only books on show are religious, and from a narrow and doctrinaire aspect of one religion is an early warning sign; a bookshelf which includes topics from spy novels to Hegel indicates a more open spirit (both real cases from this year by the way).

The English public school boys who went into the trenches in World War I grew up translating the classics of Roman literature and the values percolated into acceptable social practice and, for better or worse, created the preconditions for sacrifice. One wonders at the consequences of a generation brought up on super-hero movies mind you. At a more prosaic level if you grow up as a manager on a diet of popular books that distill simplistic recipes based on a partial or incomplete understanding of cases (around 90% by the way) then you start to see the world in those terms. The proper role of art is to ask you questions that are hard to answer. That is one of the reasons I use Gaping Void’s art so much; it is not comfortable, sometimes optimistic, sometimes the opposite but always unrelentingly questioning.

So art creates a (sic) canvas within which choices are made more easy or more difficult, but how to make those choices? I’ll try and pick up on that (in part) tomorrow.

In recent years I’ve managed to attempt, and mostly complete, a series of Christmas posts ...

I’m not sure when, or why, my life long dislike of Utilitarianism started but I ...