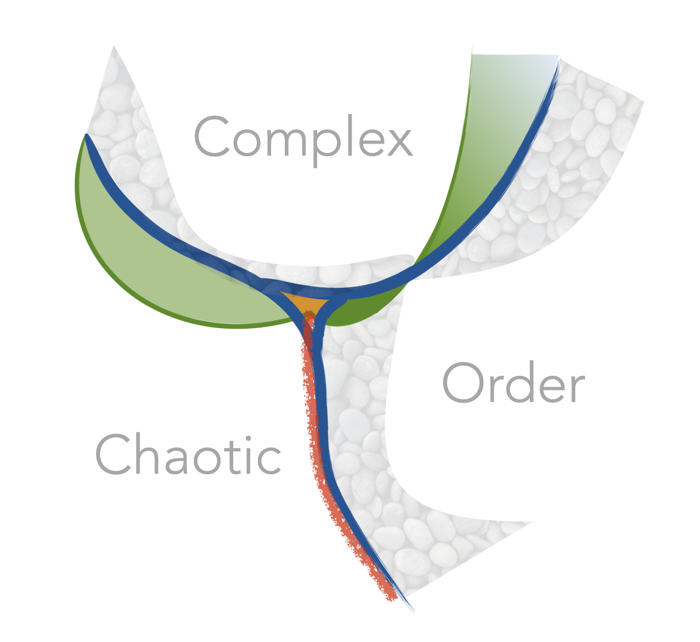 Now I want to make it very clear up front that I know this doesn’t work as drawn, it’s an exploration of some key aspects of Cynefin before I write something more substantial.  I realised the other day that I really need to consolidate the various blog posts, in particular, the St David’s Day updates on Cynefin into one place as part of getting a book ready over Christmas, and whenever you read something you start to spot gaps.   I was also preparing something on the different ways in which you can represent or introduce Cynefin (the original intent of this post).  Often I just start with the three ontological states of order, complexity, and chaos before moving on to the full version of Cynefin if I have more time, once people are familiar with the basics.  I then move on to the full five domains with the key language before adding liminality  (including the aporetic).  After that dynamics and inflection points can be added before diving into various applications and other ways of describing things including the use of trolls.  I’ve laid out the four stages as pictures plus the delightful trolls (which also shows the energy shifts between domains)  at the end of this post.  One of the strengths of Cynefin is that it is multi-layered, you can understand it quickly and get much value, but as you understand more you can go deeper.

Over the years some people have been happier to stay with the three-domain version and don’t want to shift into the full version of Cynefin which takes into account human nature through liminality and the split of order into Clear and Complicated.   All of that is well and good but the reality of Cynefin has always been in epistemology (its roots are in knowledge management and organisational design) and also perception/social interaction/assemblage (the many and various ways in which humans make sense of their environment.)  I’ll write more on that as I need to respond to the suggestion that the only cognitive element of Cynefin is in its central domain. One of the first (and most-cited) articles on Cynefin defines the domains entirely by how people know things and if that isn’t cognitive I don’t know what is.  In parallel, but I suspect not unconnected, I’ve also been handling a coterie of cyberneticians for whom ontology seems inseparable from perception and who dislike the response of reality exists live with it.  But that is for another day.

So to explain the opening picture.  I was playing with the three-domain version of Cynefin and after the Aporetic addition last March I started to think about the standard metaphor of latent heat that I use to explain the phase shift transition between domains (the shift between Clear and Complicated is a gradient, not a phase shift).   It is a short step from latent heat to the triple point in any liquid at which point, the balance of pressure and temperature means that a shift into any of the three states is easy.  At constant pressure, you have a linear progression between states.  The fact that the triple point is used to calibrate thermometers is also useful as the shift from chaos to aporetic, the key first stage in crisis management is a type of rapid calibration.  Indeed I am increasingly seeing the aporetic as a starting point and starting to play with different planes or dimensions of Cynefin – something to which I will return tomorrow.  That ended up with the picture top left.   I added the liminal domains which was easy but made the intersection of Aporetic/Confused a little different with the red cliff introducing in there to create the inauthentic aspect of confusion.  That then got me thinking about reverse transitions in Cynefin.  Most work on dynamics has focused on the transitions into liminal states from the complex  (into chaotic or order) or from chaotic into aporetic.   The reverse transitions are

Now I’m still working on these and playing with the representation.  The way I have shown it at the moment is a sort of cobbled area, rather like the knobbly pavements before a road crossing that gives your feet a tactile clue of impending danger – originally designed for the visually impaired but they utility of normally sighted people over-focused on a smartphone screen.  So one of the interesting areas here is how to create those warnings and trigger points for decisions makers, something I will explore in future posts.  This is all about navigation between phase states, hence the banner picture and the choice of a sailing vessel if deliberate.

More tomorrow on the naturalising question; or how we overlay the human aspects of sense-making in a world of reality

The triple point metaphor is a useful one for Cynefin and it carries with it variations in pressure and temperature.  I think the equivalent in Cynefin for temperature is the nature of the coupling between agents/identities which is an aspect of constraint mapping and management.   The pressure is more interesting, as my changing pressure, we can change the triple point positioning, including initiating it.   I asked the team about that on a call this morning and Zhen came up with a perspective that definitely works.  By changing perception or altitude you change the dynamics of the system.  But I don’t think that is the whole story so I open that up for contributions.

Per my comments above and a good candidate for an animation video!

This post continues an earlier series on the theme of Leadership and is the third ...

Today’s post is a development of yesterday’s and I plan to look at the various ...