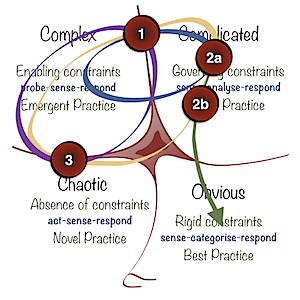 Cynefin as a framework has always been as much about dynamic movement between domains as it has been about the domains themselves. They were part of the early two by two version published in Knowledge Horizons over a decade ago when I was developing the framework based on a reading of Boisot’s I-Space which again is all about movement and change.

In our New Dynamics article Cynthia and I got a little carried away and created a whole range of shifts with numbers and names, all of which are still valid. Subsequently I narrowed it down a little and really focused on three:

So those three were the basics for some time, then more recently I introduced a fourth Grazing Dynamic shown in purple on the diagram. Here the position never stabilises enough for full exploitation. This is the domain of the perpetual beta (or even the perpetual alpha) in software development but it is also a strategic decision. To maintain this dynamic needs a strong focus on granularity and linkages to allow rapid combination and recombination. The dynamic is also at the heart of how you scale success in a complex system so expect a few posts on that in the near future. It is a dynamic that can be forced on you, but also one that you can choose to adopt to gain strategic advantage but the architecture of systems and organisational structure needs to be radically different from the dominant paradigm.

As I drew these it became obvious that there were at least three, possibly four trigger points in which those dynamics intersected. So I have played around with them for the best part of six months and I’m now ready to put them out for scrutiny and comment. The way Cynefin has evolved over the years is multiple inputs from different people, readings and also practice that eventually coalesce into a substantive change or new development. So this is new, it will change, the diagram needs work, but it is now ready for use although the name is not right. I thought about inflection points which isn’t bad but some of them are undulation points and hyper flex is not beyond the bounds of imagination so that doesn’t work. For the moment I am talking about them as trigger points; events where you can ask decision makers to pay more attention and in particular focus on avoiding inattentional bias: more on that in the next few days. So what are the trigger points?

So that is the initial thinking. A lot more to come on the method side here and it will also link with more work on MassSense and CrowdSensor which are coming along well. Trigger point will also be introduced into the training programme this fall, with events in San Francisco and London already scheduled.

PS: I’m going to stop apologising for periods when I don’t post here.  Just assume I am busy and frustrated.  I really like daily blogging and I keep trying to get back to it.  Next week I am on a walking break but I will try ….

Your thoughts needed now – Grexit? What next?

One of the golden rules of sense-making is that any framework or model that can’t ...