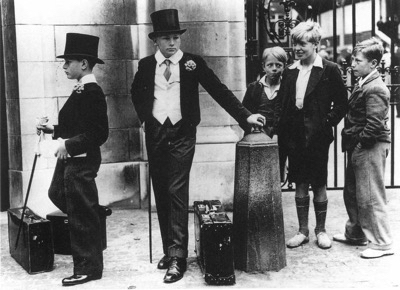 Most readers will have seen this 1937 picture before. It is used to illustrate the pernicious nature of the English class system, It was taken outside Lord’s Cricket Ground during a match between the two elite education institutes of Eton and Harrow. It came to mind as a result of an extended stay in the first class lounge at Heathrow Terminal Five earlier today. The alarm went off this morning at 0415 to allow me time to walk to Milan Central to get the bus out to the airport. OK I could have had another hour in bed but (i) I like using public transport and (ii) it was the only chance for exercise. I ended up in Heathrow at 0900 with five hours to kill before the flight to New York, economy in and economy out but a high status loyalty card and you can mix it with the first class passengers.

Now I know this lounge well, I enjoy it. There is good food, good wine, acceptable gin and tonic and fast internet access. So I found a comfortable air chair, plugged in three apple devices and after a good breakfast (black pudding, eggs etc) settled in to clear email and write an article. The first hour was uneventful but then it got interesting. Someone larger (and shorter) than my past obese self settled into the opposite chair with a smart phone and proceeded to play computer games with the volume on full. Several people attempted the standard British response of looking at him with various subtle expressions of contempt but I knew that wouldn’t work, you have to grow up in Britain for that to work and he had obviously spent most of his time over the pond and was wearing a Trump T shirt. I really needed to work, so I politely asked if he could use headphones. That didn’t go down well and I got a long lecture on how others were doing the same thing (a complete lie, but there again the T shirt indicated that truth was not a major motivator. I persisted, staff hovered and he agreed. For the next half hour he sat there sulking playing silently but as that had zero effect on me, or others he eventually slumped off to another area of the lounge.

Then it got worse in a way. A young, fit, well groomed man arrived with an infirm mother in a wheel chair in a state of fury. I think he had spent his whole life with servants as he called over one of the staff and demanded two glasses of water. Then he issued orders for material that was laid out in the buffet round and corner and demanded the instant presence of a superior. By now to be honest I was pretending to work but curiosity meant my focus was on the emerging drama. It turned out that he had not booked disabled assistance and when he had checked in the staff had assumed he was happy to wheel his month through security. He ranted on about the refusal of two security guards and one policeman to take over from him as he arrived, the absence of volunteers to take over at all stages through the process. He then demanded an upgrade to first from club class and so it went on. I really hope the BA manager who was trying to be reasonable didn’t grant that but I suspect he did.

Entitlement attitudes like that really piss me off and I regret that people feel the need to comply, but then the class system is pervasive …..

I made the point yesterday that the disordered domain within Cynefin is one of false ...

The American writer Jon Winokur defined a Curmudgeon as Anyone who hates hypocrisy and pretence ...