3: to illuminate a small field 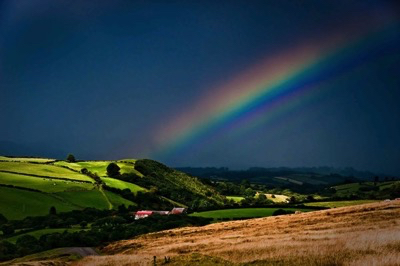 Anyone who has ever been walking in the hills will have had the experience of a sudden shaft of light illumining a previously unnoticed aspect of the landscape. The picture here shows that, with the added benefit of a rainbow taken by landscape photographer Mike Alexander in the Brecon Beacons; I have more fully acknowledged the source at the end of this post. It is a chance illumination and whether you pay attention to it can also be a matter of chance unless you are attuned to what I have called the small noticings so critical to sense-making. The history of innovation is generally one of not only noticing an anomaly, but also paying attention and realising the significance. Think of the discovery of Penicillin if your want a well know examples but you can add micro-wave ovens and a host of other discoveries to the list. Small things lead to major impacts but when and where the light falls is a matter of chance for which we need to prepare ourselves.

Within my twelve days of welsh words and poetry series today’s world is brogarwch and today’s poet is R S Thomas and more specifically his poem The Bright Field. The meaning of Brogarwch is complex but at its heart is the idea of a love of a place (physical or metaphorical in nature) so it links Cynefin, a sense of place with Hiraeth, a need to return to the place. I’ve used it here to emphasise the small places that have significance for us. In my earlier post by sense of place linked to Cardiff and the Ogwen Valley, two places I constantly visited but in which I did not (or have not yet) lived. I wouldn’t say that I even chose those places, but in a sense the choice co-evolved over multiple encounters. The memories are may small, but treasured ones; no grand schemes but small acts of becoming.

That leads me to R S Thomas is to my mind one of the greatest of the Anglo-Welsh poets, if not the greatest, but he is in the main dark in word, texture and meaning. Many of his poems are difficult to read and carry hard lessons. He taught himself Welsh and moved to Aberdaron, but never felt able to write with the same power in Welsh as in his native English, but he was distinctly and clearly welsh. Passionate about this communities, fierce when they were threatened. During the period where second homes were being burnt in Wales he refused to condemn the acts as did many, Money meant that second homes destroyed whole communities; go to Anglesea out of season and you will see few lights and the local schools are closing as are the shops. He famously said, and refused to retract: ‘I deplore killing, but what is the life of one English person compared to the destruction of a Nation?’ That despite being a long time supporter of CND and a declared pacifist. He was a man of passion in all that he said and wrote. I spent a long evening searching through his collective works for this series and The Bright Field is one of the few that does not on first reading express a bleak view of life for which the phrase “brutal realism” was made. Go deeper and you find great insight, wit and belief but that takes some work and he stands as conscience to the soul of Wales. Tomorrow I want to link some of his poems on Wales and the Welsh with a modern A level text Diwrnod y Gem Genedlaethol which uses the Cynghanedd form of Welsh poetry, but that is for tomorrow.

So to the poem which I quote in full

I have seen the sun break through
to illuminate a small field
for a while, and gone my way
and forgotten it. But that was the
pearl of great price, the one field that had
treasure in it. I realise now
that I must give all that I have
to possess it. Life is not hurrying
on to a receding future, nor hankering after
an imagined past. It is the turning
aside like Moses to the miracle
of the lit bush, to a brightness
that seemed as transitory as your youth
once, but is the eternity that awaits you.

My mother insisted I read the Bible when young, despite the fact she was an agnostic (not an atheist) in part because she said I would never understand modern literature if I hadn’t, Shakespeare got added in later. Personally I think Homer and Virgil are also critical as the references to the imagery of their writing is so common;I had to bite my tongue the other day when someone thought The wine dark sea was an original invention of Patrick O’Brian. In this short poem we have a reference to both Old and New Testaments, both to linked ideas of discovery. In Matthew 12:45-46 we have Again, the kingdom of heaven is like a merchant seeking beautiful pearls, who, when he had found one pearl of great price, went and sold all that he had and bought it and then in Exodus 3:3 Then Moses said, “I will now turn aside and see this great sight, why the bush does not burn. There are multiple layers of meaning in both, and also references to other blacker poems by Thomas; his 1953 poem The Minister for one. But this is a poem about discovering joy in the present, not harking back or imagining forward. A key complexity message here, we are informed by the past but we act in the present. Future imaginings provide false promise they are a distraction from current opportunities. By talking about the future it is too easy to avoid action in the present, to excuse taking responsibility on the basis of a higher goal or purpose. That is a part of a wider criticism I have made of idealistic approaches such as Senge and Scharmer which are worthy of themselves but suffer from the workshop/event based focus thatI criticised earlier this month.

So we need to understand the small things of life, we need to see the things we can do now that trigger change. The global initiatives on Global Warming are critical, and the retro-virus of Trumpitis has probably come at the worst ever four years for the planet. But there is something more fundamental here. We didn’t take the actions we needed to change more basic attitudes to conversation and custody of our planet. At one level we required too much (the militant evangelical wing of the conservation movement) and at another we delegated responsibility to international initiatives. No top down initiative ever works without first paying attention to the underlying dispositional state of the system. To achieve major change, other that induced by catastrophe where many things are possible, then we need to endeavour to change people’s day to day practices so that those initiatives do not fall on stony ground; another biblical reference there.

Tomorrow Public Heath England will laugh a campaign to change the behaviour of the 83% of 40-60 year olds in England who are overweight of obese. Being overweight is the new normal and it is something I am acutely aware of given my own pathway back to health and a current need to loose around 3-5 kilos. The point is the habituated patterns of a world in which transport is easy, entertainment is virtual and sport the domain of elites the dispositional state creates a new norm which legitimises a form of behaviour which is detrimental to the individual as well as to the wider ecosystem of which we are a part. More investment goes into palliative treatment for Diabetes and ways to deal with the consequences of behaviour more easily corrected at an early stage. We use money to ration access to public spaces, their due care and maintenance while investing money in what are at best palliative treatments that create their own issues.

As a society we have lost our roots, our ability to sense something in communities and places that give meaning. The internet has provend a false promise amidst great hope, a Golden Calf made in the absence of true prophecy, corrupted by bots, a echo chamber of base instincts. Like our relationship to our land, our sense of place, we need to reinvent the nature of our multiple interactions, especially the virtual ones which limit our senses, and thereby our sensibility.

The picture used here is from Mike Alexander whose web site I highly commend. Like me he has a connection with Bangor University and I love this personal statement “I believe that our ultimate goal should be to find a way of inhabiting our world without disrupting the harmony of its life.” To that add this critical statement “I do not believe that nature conservation should be based on some sophisticated version of cherry picking. We should not direct our attention to whatever we happen to perceive as being valuable in any place at any particular time. We should understand that values will change with time; something that has no recognisable value today may be extremely important tomorrow.” I found the site while hunting for a quote from Aldo Leopold ‘There were once men capable of inhabiting a river without disrupting the harmony of its life.’ That was important for me as our new programme on The Making of Meaning via the Cynefin Centre at Bangor University is about understanding the interactions between the spiritual and the physical and the ideas of stewardship that are the heart of Leopold’s writing. Just before Christmas I was involved in an extended call with the National Parks authority in South Africa with whom I have worked in the past, where many of the issues raised in Mike Aleander’s personal statement came up. They are dealing with multiple tensions between human needs, and needs of extreme poverty, needs of a problematic government, scientific needs, tourist needs and all of that before we look at the flora and fauna of a fragile eco system. One major element of the new research programme on meaning will be about conservation and it’s social context. So discovering a source of some of the most beautiful imagery was a blessing. This is an artist whose works reeks of an profound understanding of Cynefin.

2: a mixture of pungencies, half exquisite and half plain

I’m building around the welsh word hiraeth today and I will return to it in ...

Yesterday I took a fairly positive poem from R S Thomas as my them. Lovers ...