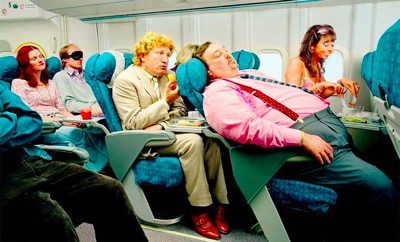 A little bit of trivia today, but an interesting illustration of culture and comfort (in many senses of the word). I flew in yesterday from Dallas landing early in the morning. American Airlines upgraded me to business so I got some sleep, although it was the older configuration so 2-3-2 rather than the 1-2-1 herringbone that we had on the way out to New York. As usual I got an aisle seat as I like to be able to get up when I want to with disturbing anyone. Not only for the comfort breaks (which increase with frequency as you get older) but also to swap between book and computer and so on using the overhead bins. The downside of this is that I was disturbed several times in the night by the person in the middle seat who’s prostrate was obviously considerably enlarged.

Today I was on Air Canada to White Horse via Vancouver and was booked in economy. I had paid extra for an exit row aisle seat which would have been OK, but limited elbow room and I needed to work. When I went to check in there was an offer to upgrade to premium economy for less than £100 so I took it. Downside, no aisle seats left on a 2-4-2 configuration (economy was 3-5-3) so I had people to my left and right. That meant I had to unpack everything I needed and stow it in the seat. but also on the one occasion in a nine and a half hour flight where I had to head for the rest room I had to disturb my neighbour. I put that off for as long as possible hoping that she would go and I could nip out at the same time, but she sneaked out just before the trolly came down with drinks so I was blocked in and my the time it was clear she was back.

Now all this sounds absurd, but I have a British upbringing and the last thing you want to do is make a fuss. We never send wine back even if it corked, over done steak will receive an everything is great if you are asked but the waiter even if you have mentally resolved not to return. The American habit of asking for a doggy bag I find chronically embarrassing and I try and make it clear through my body language that I am deeply sorry to be a part of this.

So overall my view is that it is better to be disturbed, than to disturb (a new line for the famous sayings of St Francis if you haven’t got the reference). In social situations anything to avoid embarrassment. In the situation pictured I would endure rather than make a fuss. In complete contrast if you put me on a stage and give me a target and the parliamentary debating tradition clicks in and a different persona comes to the fore.

Odd things cultural constraints, even when you are aware of them, you are bound by them.

Catharism was a medieval heresy who believed there were two Gods, one evil and one ...

First day of the Cynefin and Sense-making course here in the Yukon to a government ...