Then kill the messenger … 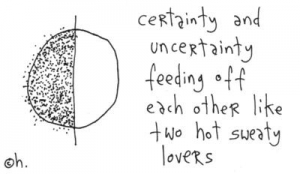 It’s the twelfth day of this series and time to draw it to a close.   A final post needs to create some sense of completion, either by some summary statement or by building to a climax.  In a sense I am taking both options by looking at the willingness of people to live with uncertainty.   Looking back there is a common theme to most targets, namely their attempt to eliminate uncertainty when uncertainty is inherent to the current dispositional state of the system.  The dichotomy of empirically validated recipes married to the myth of the inspired leader is one illustration of that.   You either follow a recipe or handover decision making responsibility to the cult leader or the cult method.

Now there is nothing wrong with certainty when it is viable, there is everything wrong with it when that viability is questionable.   As the cartoon shows there is a constant tension between these two and provided that tension is maintained it’s a creative and productive one.   So, as ever context is everything.   Ordered systems sustain recipes and repetition, chaotic systems in the main require decisive leadership or simply waiting for order to emerge (the free market perspective/heresy) but complex systems work in very different ways.

We can create stabilities through boundaries, but permeable or loose boundaries are more resilient and more sustainable.   We gain understanding through parallel safe-to-fail experiments so that as a pattern  of success and failure becomes clearer, we get a sense of a sustainable direction that we can move in and shift to exploit.  We need to deploy network engagement in decision support and get the granularity and interaction right.  We can manage all of this, indeed we should do so, but we manage an emergent flow not a static position.  Once you embrace uncertainty it is no longer a scary place.   What makes its scary, and creates the space for snake oil sales people and other charlatans (including some well meaning ones) is trying to pretend it doesn’t exist.

So this is my shortest post in the series, with the simplest message and the most important one.  Uncertainty simply is.  Yes we can and should reduce but most of the time we simply live with it.   Maturity is about using multiple contextually appropriate solutions, balancing chefs with recipe book users and at times naiveté.   We manage, live and in part direct the flow of meaning our organisations.  Don’t let the idiots (see previous posts) ruin that for you.

One of the main enemies of all of this is time and capability or understanding.  I am writing this after coming off a three hour conference call trying to dumb down a complex message to the point where the CEO of a major international corporation might understand it enough to pay attention.   Now that has been a depressing experience as it requires sound bites, pain points and a recognition that anything which requires thought is unlikely to succeed.   Now I want this deal to work and I have good coaches but it is a depressing process.

So a final plea to senior decision makers, and a pretty direct attack on common practice.  If you allow yourself to get caught up in meetings, decision making and the like to the point where you no longer have time to think and reflect then you have damaged yourself and downstream the organisation that you lead.  It also shows you are not leading well as you have too little time.  Paying attention is not the same thing as being busy.  Some of the best executives I know have brains that can sense there is something they need to spend time on.  Some of the worst make a virtue of ignorance.   Indeed the celebration of ignorance, the anti-intellectualism that dominates too much management thinking represents the immanence of death during dynamic shifts or paradigm changes.  It’s not enough to simply act, you also have to think.   It’s not enough to think you also have to act.  They go together and the more senior you are the more you need to be comfortable with both; neither can be fully delegated.  So if someone comes along and offers you a solution that doesn’t require you to think then kill the messenger ….

Deal with the system as a whole please

11: You can't reduce or aggregate a complex system and trying is wrong a priori Reductionism in ...

One of the really great things about growing up in my family was that we ...