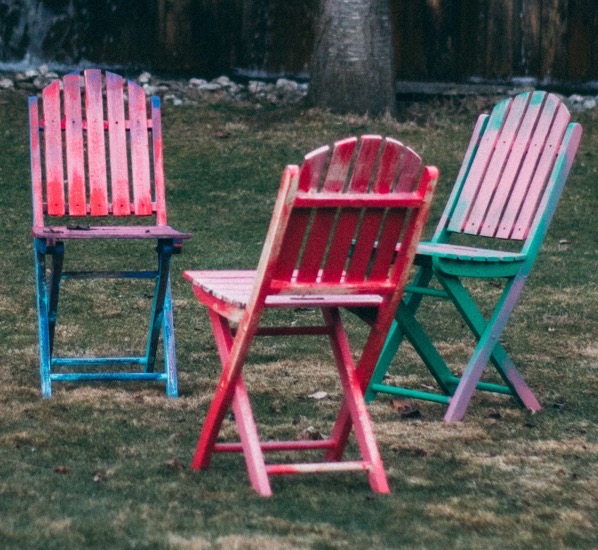 Back in October 2017, I published a blog post on what I was then calling the Ticotocon.  The context of that post was a series of friendly exchanges I was having with Daniel Mezick about Open Space (he had popularised Harrison Owen’s original work within the Agile community).  From memory, we were both concerned about the reduction of the technique to a series of highly constrained sprints in Agile conferences.  I’d just accepted an invitation from Daniel to spend some time with him and Harrison the following January and was starting to explore material for that.  For reasons that have never been explained that was abruptly canceled just after New Year, but these things happen and I’ve learned to live with them over the years.  Aside from that focus, there were three other background activities to the development of the Triopticon and they need some explanation.  If you just want to know how a Triopticon works you can skip all of this

Firstly back when I first started with IBM I was interested in developing a new type of facilitation based on high levels of interaction and transparency.  That came out of my earlier GENUS programme in DataSciences where we had started work on facilitation.  The IBM takeover of Data Sciences was in 1996 and the GENUS programme thus dates to around 1994 which is also the date Harrison Owen write the first User Guide for Open Space which I came across later in my time within IBM as it was adopted by them in the US.  There was a lot of buzz around facilitation in those days and interestingly I had gained a lot of ideas from indigenous work back in the 70s when I was working in the student wing of the World Council of Churches.  Harrison took similar inspiration from his more extensive work as an Episcopal priest working in Africa and elsewhere and first moved into consultancy in the space in 1977.  At that time I was still plunged into Liberation Theology and various forms of social activism. As a side note, there was a difference emerging then between those of us with a disciplined approach to change (the Marxist Leninist group) and the New Age Anarchists.  A distinction which has continued in different forms today.   With the acquisition by IBM, I finally had some cash and resources to develop things so we created a mobile facilitation facility.  It had large whiteboards that could be flipped over and a massive roll of brown paper that could be quickly cut and placed on said board.  The idea was that fresh working spaces could be quickly created and the previous work preserved – the pace was essential here.  We used hexagon-shaped post notes and the metaphor of the Theatre in the Round was in my mind.   We used that in highly successful workshops for the Virgin Group, the Stock Exchange, and others achieving in two days, with more transparency, what normally took months of meetings, proposal writing, and the like.  The team had a facilitator, scribes, and a complex technology-based backup system.  So working with the board of a company we could have the directors in a circle with their direct reports sitting behind them and behind them electronic access to their whole workforce.  On the IBM side, we had key experts similarly and they had support behind hem to pull in as needed.  The whole thing was fast-paced, highly interactive, and most definitely managed.

Secondly with the formation of Cognitive Edge, we started to develop a body of methods and tools including various approaches to what is now known as complex facilitation.  The idea of getting everyone together for a limited period of time to resolve issues and explore possibilities was front and centre to that effort.  By that time I had more experience with Open Space within IBM and I could see it had high utility in building consensus but I had also observed how it could be manipulated by the power game players in IBM.  They were generally not concerned with the outcome, but with power.  Things like the law of two feet meant that it was easy to isolate a maverick whose voice needed to be heard.  In a recent Medium post (with which I have some agreement and some disagreement) Nick Argell makes as interesting point “Military mindsets (like mine, and I think Dave’s) tend to be offended by uselessness. Civilian mindsets (like the majority of Agilists) tend to be offended by callousness”.  For good or bad reasons a lot of the practice of Open Space in IBM lacked the ability to do other than give people a good time but didn’t present a sufficient challenge to senior management.  It was far too easy for them to go on as before and pay lip service to the outcome of an Open Space with a few token concessions.  Now when I raised this with various advocates I was told that it wouldn’t happen with a good (by which they generally meant themselves) facilitator.  In many, but not all of these cases I was happy to agree but I am always concerned about this argument Well it would have worked if … argument although we all deploy it from time to time.  A process should work regardless of the competence of the facilitator in the majority of cases.  Coming back to the military example, they generally assume that they will recruit average people and through evolved processes and discipline make for extraordinary results.  In too many companies they try and recruit above-average people which is something that is not, a priori, a scalable practice!  I still remember a former British Prime Minister saying that he wanted all schools to be above average which rather indicates that his own education (Eton as it happens) was not.  So I took the original work and create an orchestrated large group facilitation technique that we worked up experimentally with British Colombia Forestry (working with Michael Cheveldave) and Northern Territories in Australia (with Viv Read and Sonja Blignaut).  Both were linked to strategy, both used Cynefin, both produced several hundred tangible outcome projects all tested by ritual dissent and multiple orchestrated interactions.  People didn’t choose what they worked on, they were constantly moved to interact with different people and no one was able to gain.

Thirdly was the growing debate about the role of keynotes at conferences.  This has a rather Manichaean set of motivations on one side we have people who are genuinely concerned to engage everyone in the process, but on the other (and often the most vociferous) we have people who simply can’t make keynote because they are not good speakers, don’t have original ideas or whatever and resent those who do.  Rather than do something about their own capability they try and pull everyone else down to their level.  Now my perspective on this was and remains that it is not an either/or but a both/and. In practice, the keynotes are there to give people novelty and new ideas, often controversial ones, and attract people to an event.  But within those or events, or as stand-alone an un-conference where everyone can engage is also good.  I do by the way have an allergic reaction to motivational speakers or popular book authors who charge $60k plus to deliver a well-rehearsed speech you can probably watch for free on the internet.  The vast majority of my keynotes are expenses only and I run a pay me what you are paying the others and if everyone is donating their time it is fine policy which is why I have always resisted joining a speaker bureau.  What I started to realise was needed was something that had the best of both worlds.  In a way, we are dealing with the wider question of authority here.  So if I am expected to treat a Young Earth Creationist with equal respect to an Evolutionary Biologist when the subject matter is the age of the earth then I’m sorry but I won’t.  But if we are discussing the nature of civic society then we are equal, although if s/he wants to bring on The Rapture by provoking nuclear Armageddon that is another matter.  The other motivating factor here is that most people who act as keynotes generally like the interaction and challenge with others.  Yes, there are some who just want to be loved and don’t respect challenge but they are in the minority (if we exclude the motivational guys).  Audiences who ask you difficult questions are the ones to cherish.  This work also refined Silent Listening and Ritual Dissent as techniques.

There is more to the overall history but those are the main elements.  So now to the process which is described as a series of stages and is an open-source method by the way.  I don’t recommend you run it without mentoring and we are also making changes and adapting it to a virtual environment with the first event in the final stages of design at the moment.  The format has now been tested over several events starting with the first one in Whistler two years ago and its seen a lot of refinement.

Who are the groups involved?

What is the sequence?

Now there is obviously more to this and the detail is still evolving but that is the basis of the method.  To date, it has received a good and at times enthusiastic response so I think we are to something here.  The origin of the names comes from the first full session held in Western Canada and we picked up on First Nation symbols and the idea has stuck.

To be clear this is not designed to compete with techniques like Open Space, Oxford Style Debating, or other methods.  They all have value but this technique has been developed to conform with the three principles of complex systems interventions:

Anyone who wants to get involved as we further develop this, feel free to get in touch.

And why the name change?  I got outvoted with some derision …

Chair photo by David Vilches on Unsplash, the open space metaphor in the banner picture is by my good self taken last Sunday on the latter stages of a highly enjoyable walk in the Black Mountains in Wales.

If I am honest about things I am probably guilty of Pelagianism in some form. ...