The need for order 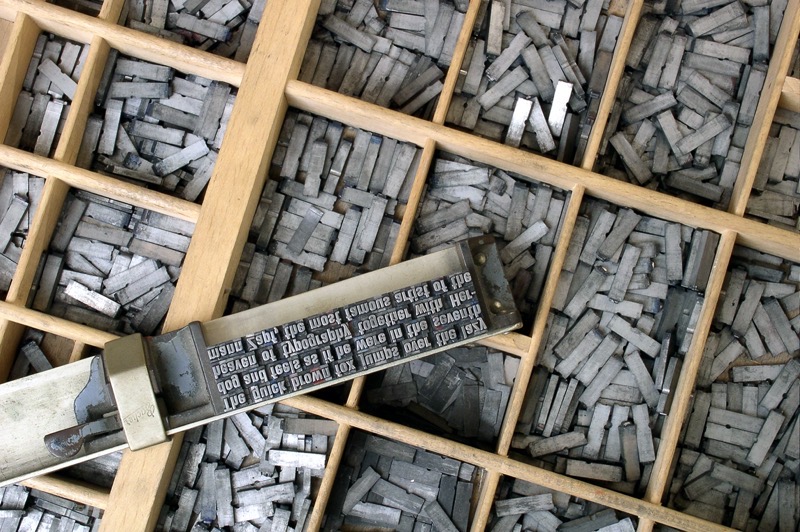 When I was at school, way back in the days of the white-hot heat of technological optimism, the local printers made a gift to the school of their old platen press and a case of font trays. There were drawers for each font and point size all with a similar layout – a pattern that had emerged from the 15th Century based on the frequency of use.  You would hold the composing stick (shown in the picture) in one hand and rapidly slot cold metal into it with the other.  When full it would transfer to a platen and would be held in place with ingenious clamps and the whole thing would be loaded into the press.  You had to get that just right or the whole thing would collapse and you would be picking up bits of metal for hours and trying to sort them back into the font-tray.  It was also a discipline to clean the fonts in the platen tray, unclamp, and then relocate into the font trays when the work was finished.  That discipline was vital and you could not afford to be untidy or casual about it.

I’ve written before on the impact of this on me at a formative age.  Too many decades later I understand more of the embodied nature of the knowledge I developed there and also some of the habits that carried over into my life.  My apprenticeship as a carpenter and boat builder to my father in our garage has also taught me never to leave tools uncleaned and to ensure they were properly stored at the end of the day.  I have previously launched social media tirades against the sin of people who dump things as opposed to those of us who stack at the time; thinking about future order rather than just leaving it to chance or other people.  I frequently use the management of the dishwasher loading as an example of anticipatory thinking; some people just put things in and end up constantly rearranging, others think forward over the day and stack accordingly.  Structure and habits of body and mind reduce energy consumption overall and also preserve valuable objects from damage!  That carried over to my early work writing code for decision support systems for the likes of Guinness where the structure of sub-routines and object definition provided a coherent scaffolding that allowed complex, rapid changes in system and function.  In order to effectively manage mess, and mess is a part of life, we need to provide a structure where we can, and we need to know its nature and its sustainability.

All of this is about creating the right degree of order in any system.  One of the critical aspects of Cynefin is the recognition that order has value, and further that there are ordered aspects to a complex system.  I would argue that art is not possible without first acquiring the craft, once you have it then breaking the rules can create new art forms (think Picasso or Wagner).  The acquisition of craft skills is an enabling constraint in complexity terms.  The same is true in organisational design, software programming or counterterrorism; we should never neglect order, but neither should we see it as a disabling constraint.  Praxis makes perfect, the chef knows the theory of taste and has completed an apprenticeship in the craft.  Complexity is too often used as an excuse to let anything go and when a lot of people talk about spontaneous self-organisation they actually mean anarchy and that almost always ends up in spontaneous combustion.  Equally the fear of uncertainty leads to a premature imposition of order and a failure to navigate the possibilities that emerge when you recognise complexity in a situation.

Finding out what you can manage, and what can be ordered is therefore a key aspect of any work in this field.  So start with mapping constraints and modulators and then simulating likely effects of change.  Identify which can be stabilised and as importantly which should be (this may involve safe-to-fail experiments) and create distributed sensor networks to monitor for weak signals and emergent patterns; fast response & fast exploitation or recovery are key here.  Phase shift transitions are obvious the most dangerous so here weak signal detection is key and that can only happen if your sensor networks are culturally, cognitively, and experientially diverse.

The banner picture further illustrates my point, the walk was a long one and I was descending in the dark.  So I had two head torches, two Sat Navs, as well as a map and compass and I, had chosen a route where a head torch descent was not dangerous.  I have an old medical sample bag that contains all the necessary requirements including a Rab survival bag and other equipment.  Duck Tape is always there.  There is a habitual routine for getting ready for a mountain trip, especially in winter, and while the expedition itself may be complex most of the preparation and many of the responses are highly ordered.  Without that order the ability to manage complexity goes down, without the craft there is no art and without theory, there is no sustainable scaling of practice.

You manage what you can manage …

Opening image is by Willi Heidelbach from Pixabay

Banner image was taken last week from Kentmere Pike looking west to the sun setting over the Irish Sea, Yoke, Ill Bell and Froswick in silhouette.

Just as a warning, this is a rather rambling post.  The overall theme is about ...

The title of this post is used collectively to refer to gluttony, fornication, and avarice ...