The Inn at Whitewell

I first came to the Inn at Whitewell back in 1973.  I was taken there by Blyth and Arthur as part of a trip over the Trough of Bowland in the spring of my first year at University.  Blyth had worked with me in both the Debating Club and the School Press but was a year older and had gone up to Lancaster the previous years.  She and Arthur were one of the most physically mismatched couples I have ever known, but they had come together as opposites often do and Arthur had a car!  Back in the 70s that was a big thing on campus, most of use relied on the hitching post or public transport.  The Inn at Whitewell for lunch was a highlight of that trip.

I've been back many times over the years.  It makes a good half way house if you are driving to Scotland from the south.  Indeed it is worth driving for the excuse to stay there!   I've been there with wife and young family, with work colleagues and on my own and it has never disappointed.  So it was a logical lunch time destination on the way north to the Lake District for a celebration of my wife's 60th – the children join tomorrow. 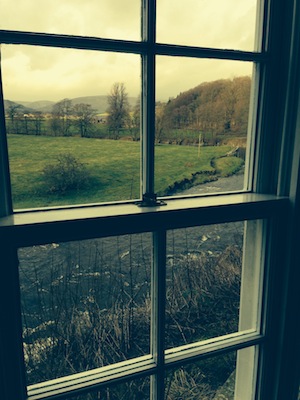 As you leave the M6 north of Preston the scenery changes and you are into the glory that is the Trough of Bowland and the estate of the Duke of Lancaster.   As we dropped down to the trout stream that forms a backcloth to the Inn it looked like nothing much had changed.

Walking through the front door the bar was no longer where it had been for the previous decades, but there was more room and any changes were sympathetic to the period.  If anything better, as the view from the bar was enhanced with window seat and stools making the view over the stream to the fells (pictured) available to all, not just (as in the past) diners in the restaurant.

It is rare for any location to preserve quality for decades, but this is one.  If you ever get a chance divert for a meal, or better still find an excuse to stay.   We booked for the return journey on Sunday.  They are also a wine importer and at various stages over the years had managed other enterprises on site.  The latest is a holiday house which looks interesting.   The only pain in the area is the various restrictions of access that arise from the shooting estates that have (to be fair) maintained the overall environment over the years.  But that is changing and there are more walks and more opportunities.

A core part of Cognitive Edge's mission/business is education and our courses have developed over ...

Today was a work day in that I had a long standing appointment to meet ...