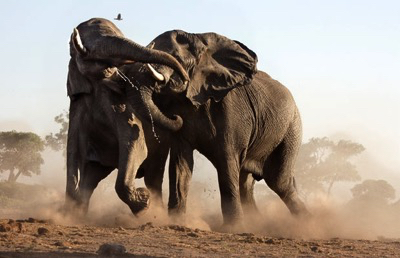 There is an old african proverb: When two elephants fight, it is the grass that suffers. The third party damage of conflict is often greater that the conflict itself. I used bulls yesterday, elephants today. In part to make the point that conflict is also natural in most species. That does not mean I am about to lapse into some form of crude net-darwinism or make an argument for imposition of order through the Sovereign to overcome the brutish state of nature. Hobbes was of course writing in and for his time, but there is degree of realism in his political philosophy that commands respect. My reason is a return to a common theme of the last two posts, namely the argument to deal with the present rather than attempt to cajole people into some idealised future state – or a pragmatic one for that matter. We need to call on people to do what they can do now, not what they might be able to do in the future, if we want to achieve change.

That point, and the proverb offer two interesting strategies on post-conflict reconciliation:

Both involve a change in perspective, a change in filters to come back to my first post in this series. To active the first we need to activate some type of empathy either by personal encounter or through an evidence base of supporting narrative. In respect of personal encounter it is not enough simply to go on a tour. I’ve been on those in air conditioned buses to shanty towns; you know the sort of thing: Come and see the poor people, express sympathy then go back to your air conditioned hotel for a restorative G&T. I remember being in one African village which was getting ready to host a World Bank Official who wanted to live with the poor for a week. The accommodation was being cleaned, sanitation installed (authentic but acceptable) and supplies of clean water were being procured. These days I prefer to make it more evidence based, presenting the raw narratives (which can include pictures) to support statistical data or a pattern representation (yesterday’s landscapes). Inauthentic experience is worse than no experience at all.

Ritualised conflict will be familiar to any follower of sports. I really want the English to loose whenever they play anything, but I married one (well she was of Huguenot origin so is really french), live in England (although I want to move back to Wales) and work with them happily. I can mix in a rugby ground, but there is a different feeling at the match. People who argue that the solution to conflict is to remove competitive sports (and competitive spectating) are missing the point and may be making things worse rather than better. Creating a common enemy, making conflict a ritual act; there are many techniques here. I’ve seen this post merger or acquisition where previous warring tribes were united in the face of a common enemy. In Ireland back in the 70s we tool people from both warring communities and sent them to work in slum areas in Latin America and made no reference to the Troubles. Conflict does not have to be physical to exist or to be used. Take a look at the French Toast scene in Kramer v Kramer for a good illustration of this. McKee in his wonderful book Story describes these as a man in conflict on oh so many different levels.

Tomorrow I will return to the landscapes in what will be the last, or possibly the penultimate post in this series.