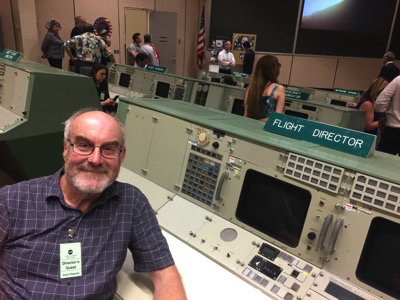 The picture comes from Monday’s VIP tour of NASA before a workshop of innovation at which I was a guest speaker on the Tuesday. The highlight was the chance to sit in the control centre for all the Apollo missions. It is a national historical monument and we were enjoined not to damage any of the original equipment. Now the moon landing and post and prior missions were a key part of my childhood, a time when we thought the moon was just the starting point of a wider exploration of space. Back in 1969 I was 15 years old and on holiday in a Caravan in a field above Porth Colmon, the location of an annual three week break spent in canoes and alter sailing dinghies. As a family we were clustered around the radio to hear the news. There was a lot of hope back then about the progress that we could make and we were all exciting by what seemed to be revolutionary technology.

A few decades on and the hope is reduced, a Mars expedition is being planned but to be honest the teenage me thought we would be way beyond that by now, and to be honest from a survival point of view we need to be. The technology was primitive by modern standards, but the political will for exploration has done backwards. It was a point I made at the end of my presentation, the political will and public opinion in a post-fact society is a significant issue for science and its utilisation for public good.

The seminar itself was interesting with speakers really falling into two camps:. mMotivational speakers and the rest. The overall idea was to bring Industry into interaction with NASA technology to see what possibilities would emerge and we have a lot of examples of space technology providing benefit on the tour and in discussions. Now I need to confess here that I don’t really enjoy professional motivational speakers that much but I would place the couple we had at the more serious end of the spectrum. However when push comes to shove, even the best simply assemble cases in which they generally have no involvement to support a series of platitudes and group exercises that make everyone feel comfortable but never challenge entrained thinking; all part of the entertainment industry. OK the cases are interesting, the platitudes are useful reminders; but for a senior group of innovators I would want something more serious. The fact that one of them emailed everyone with highly polished self-promotional material after the event confirmed my view. My contribution was definitely not in that category but it may have motivated people to see things differently from the emails I got the next day and the conversations I had before I headed for a taxi and the flight back to the UK.

Now to a personal note, for the last three days I had hovered on the edge of cancelling various sessions and heading home. MY wife had fallen ill and was finally taken into hospital on the Monday. By that time it was too late for me to change the flight so I headed back on the Tuesday evening, cancelled a trip to Latvia and headed for the Great Western Hospital in Swindon. By the time I got there we were told that an emergency laparoscopy would be performed that night or early the next morning. As things worked out it was the next day and the news was good – no issue requiring removal of the gut so my wife just has to recover from what is a major operation. After the operation she was in the intensive care unit for two days and I couldn’t help contrasting the equipment. The monitoring equipment, infusion pumps etc. were fascinating in their sophistication, but also in terms of the design of the overall delivery systems. The early Apollo missions used start of the art technology for the time, run by the best engineers of their generation, but the effort to scale and sustain was therefore problematic. In contrast we were also shown the more Heath Robinson approach of the Soyuz missions which continue to this day. The material to which my wife was connected represented what I think the conference was in part about. Very sophisticated requirement, produced at scale and managed by non-engineering staff to literally save lives.

So some learning for me there, but the hope?

back to the salt mines

After yesterday’s post using salt marshes as a visual image of providing direction in a ...

Over the last couple of weeks I’ve been thinking a lot about constraints in the ...