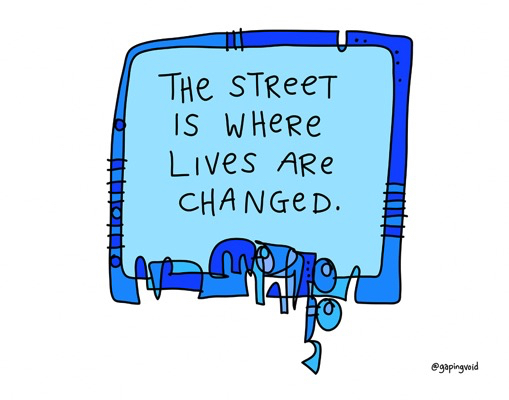 I’ve had a frustrating few weeks since my last post. An as yet uncorrected error in Blogo (which I otherwise love but …) associated with multiple images meant I lost two hours of work that I had put into a follow up to my last post on meaning and constraints. I haven’t had the heart yet to restart that but I will get to it, hopefully before the end of the month. Pending that today’s inbox through up this brilliant cartoon from Gaping Void. Incidentally, I’m looking forward to meeting them in a couple of weeks in Florida to discuss some joint offerings. I’ve been using their cartoons for years but hopefully we can do do something with wider impact.

So to the cartoon, well two other things came up during the week. A longish twitter exchange with Euan Semple and others over the different between trying to change individuals or changing the system and a fascinating post by Mark Manson on The Tragedy of the Lemonade Stands. All of this links back to my earlier post on a need for empathy which got a lot of interest. It is also linked to the question of agency in social systems which is occupying me at the moment so expect a few posts which fumble around that issue while I get my mind around it. I originally reacted to Euan’s original post where he said that all change emanates from the individual. You can read my response there which may have been a bit harsh so in the interests of transparency I will quote the paragraph in full for those who have not followed the link.

I am convinced that all change emanates from the individual. Structural and procedural changes can help but unless people change nothing changes. And of course people are messy and unpredictable. There is an intimacy about real personal change that most in corporate life back away from, or sanitise with process. How many corporate change programmes hit the mark? How many annual appraisals change lives?

Now I agree that annual appraisals rarely if ever change lives, but there again the underlying assumption behind their use is that change emanates from the individual. I’m happy to agree that there is an intimacy about personal change, but I generally think that corporate life (an interesting thing to be anthropomorphised) should have nothing to do with deciding the intimacies of personal attitudes and beliefs. This is also, in part, an issue for me a lot of the fluffy bunny end of systems dynamics with its overemphasis on the personal in a sense becomes a modern, if well intentioned, form of neo-colonialism. More here for those interested. To my mind the legitimate concerns of an organisation, either industrial or government, should be limited to managing constraints, both those which contain and those which link people and things and then allocating to resources ideally on an emergency evidence base from those they serve or who work for them. Now there is a lot in that last sentence which needs unpacking and I plan to do it over this weekend.

For street stories in society we can substitute water cooler stories in industry. In effect these form a pattern of expectation and a determinant of dispositions from which most individuals cannot escape. Some saints do, as do some sinners. But a model of change based on the individual is predicated on sainthood (think of all the books on ideal models of leadership) will not scale and is too easily exploited by the sinner (think Trump). We need to think of models of change where engagement can be based on the day to day needs and ideas of ordinary people. At times a phase shift will be needed, but radical change like all interventions in a complex domain have only one universal, namely unintended consequences. The smaller the intervention the less risk, the more opportunity ….

Now I suspect Euan and I are agreed in practice, hence my comment that I may have been a bit harsh in my response. He rightly argued that individuals are involved, my issue is the way that they are involved and the limits of what is possible. Now we need to develop a new language to describe that, the potential exists of this in Deleuze, Heidegger and others which provide the abstractions through which we can understand the implications of discoveries in the natural sciences. But all of that needs to be translated so that engagement is wide enough, and particular enough to have an effect. More on that over the next few weeks and I will also return to part 2 of my last post, once I have completed the basic thinking. In practice I think it was a good thing Blogo deleted that work, even a week or so later I want to write something different.

Critically the path needs to start with the street, the water cooler not with a model of how things should be, however well intentioned. Multiple actors in the system may exhibit purpose, some have agency; its a lot more complex that a personal will to change. Any change can only take place in context and the opportunities for that context to shift are rare and often witnessed only with the benefit of hindsight.

Final note for all those who volunteered to help in response the empathy post referenced. I will be a couple of weeks late in issuing stuff but I hope to send out a consultantative document next week; I’ve commissioned a copy writer to break the log jam that is my travel schedule!

I don’t know how familiar readers are with Dali’s 1943 painting Geopoliticus Child Watching the ...

The daily email from Gaping Void is saving me the effort of searching the internet ...