So in the last in this series of updates, we move to the chaotic domain.  As I have previously explained at length, chaos is a transitionary state difficult to maintain for any length of time.  Constrains of some type come naturally.  However used properly this is space of what I have called eureka innovation, to contrast with incremental innovation.  It is also the domain where we can introduce distributed decision making but that is for another day.

Like the simple domain described yesterday, the chaotic one is only valid in the top right, the bottom left is a bad place to go. To use the medieval mapping nomenclature herebe dragons and other strange beasts.  So the dimensions here are:

All of that means that we really only want to enter the domain deliberately and where we can easily impose constraints.  That means managed innovation and wisdom of crowds or distributed cognition based decision making (more on that in a future post as promised above.   In contrast, if we knew it was possible, but we don’t know how to manage constraints then we need prompt and authoritarian crisis management as we are in the last chance saloon.  Unexpected collapse combined with no ability to apply constraints means that unless we are very lucky were are into death and rebirth.  The rebirth is more possible the sooner we recognise the position the better the chance that something good will come out of it.

Entering chaos deliberately without knowing how to impose constraints is plain dangerous, we should if we can pull back and think again.  Entering the domain knowing we cannot impose constraints is plain stupid and (in homage to the telegram in the opening chapter of Swallows and Amazons) we are Duffers, better dead.   If we knew it was possible that we might end up here, but that constraint imposition was impossible then the best we can do is to ride the flow and pray, things might work out but they probably won’t!

Moving to the top left, then unexpected or plausible moves into the domain where we know how to impose constraints represent either the need to institute a planned response which is what contingency planning is all about.  Alternatively, it is an opportunity for innovation.  There is never a better time to change things than during a crisis so have an innovation team primed to go in parallel with your crisis management team. 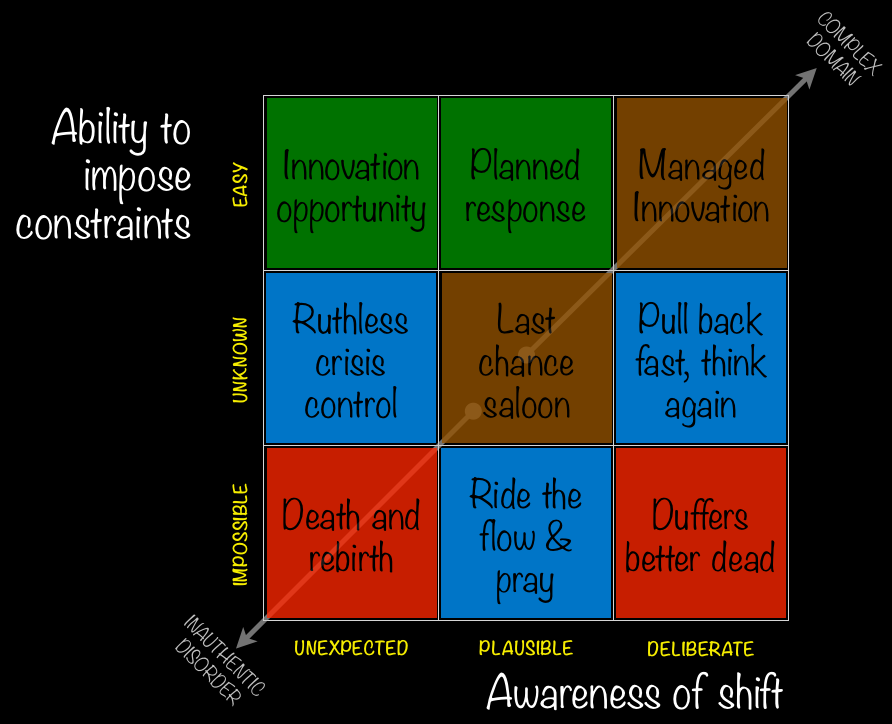 So moving on from yesterday we come to the Simple Domain.  I normally present this ...

So to the end of a productive week in Melbourne, after a gentle start life ...