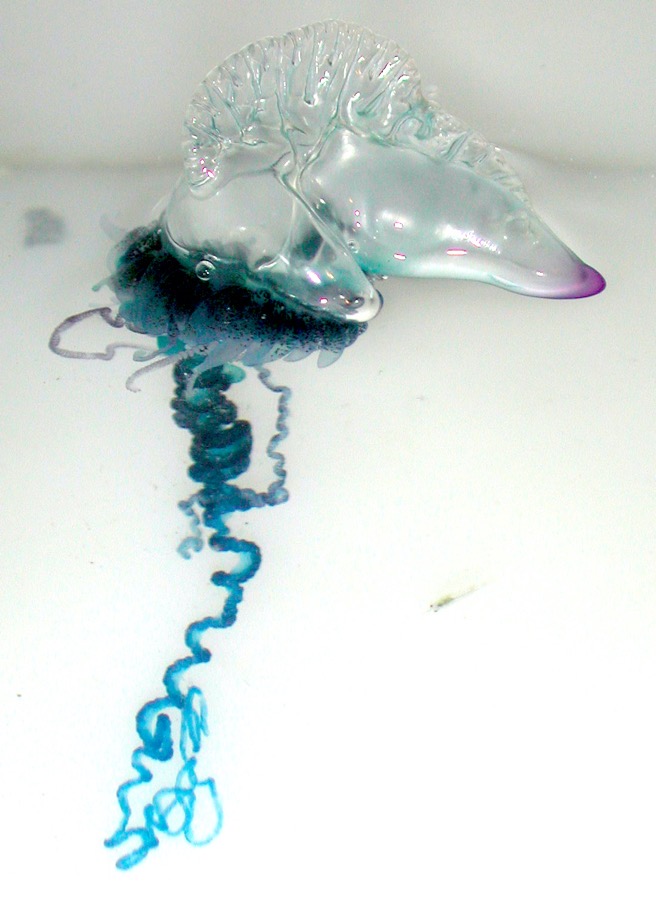 I am indulging myself a little with the title to this post.  For those who don’t know it describes a type marine entity which, while it appears to be a single organism is in fact a colony of different zooids that are different morphologically and are functionally specialised.  One of the best examples is the Portuguese man o’war pictured left.  They have no means of propulsion but drift with the tides and if washed up can cause a beach to be closed as they are very poisonous.  That is the theme of The adventure of the Lion’s Mane one of the Sherlock Holmes stores, and one recounted by Holmes not Watson.  interesting each colony is either male or female so breeding takes place between colonies.  Interestingly the zooids can be connected by tissue or contained within a common exoskeleton.  This parallels with our work on constraint and the idea of those which contain and those which connect.

As another curiosity, the blanket octopus , which is immune to its poison uses ripped tentacles as weapons.  I used that ability in a lecture back in 2009 to illustrate the dangers of IT departments trying to avoid the implications of social computing.  Something which is still true in many guises today.  As well as the photograph I have also used a 19th Century illustration (to the right) which gives you a good idea of the nature of the beastie and is a work of art in its own right.  To be very clear this is not a jellyfish.  One of the two things that really infuriated me in IBM was (i) being called a behaviorist in an IBM double-page spread add in the FT, Wall Street Journal and other such publications and (ii) when marketing changed by Portuguese man o’war to a jellyfish on the Cynefin emergent business unit.  They said it looked nicer and weren’t they the same thing.  To see the result look at the banner picture, extracted from the slide template.

Now a hybrid, in contrast, arises from sexual breeding between different species.  We know no that our own species interbred with Neanderthals and acquired some hybrid vigor in consequence.  Interesting in these types of Covid it also turns out to make some more vulnerable and some less so.  The minotaur is a mythical example of the same as are centaurs and sphinxes.

There may now be enough material to see where I am going with this, namely the whole question of organisational design, and in particular the way, and the where, of work over the next year or so.  I am not talking about post-covid as I think that is years away at best and there are worse things than Covid starting to thaw out in the Siberian Tundra.   So we are going to have to find new ways of working and interacting that can handle a state without stability and with constant fluctuations of working practice.  In the 14th Century, the Black Death killed 50 million people, approaching half the population of Europe, and it created a major turning point in economic development.  In those days if you had money you retreated to your country estate and left those who couldn’t to the plague pits; in the modern-day that is being replicated as rural house prices rise.  And of course, if you are really rich then you head for space …

Now there are links here to two statements I use a lot:

I’ll come back to both of those tomorrow, but just hold the ideas for the moment, and what follows uses both but in particular the second.  Now, this post was prompted by one from my old friend Nancy Dixon who I have agreed and disagreed with over the years within the field of knowledge management.  The post is called Yes to Hybrid, but No to “Working in the Office Any Two or Three Days a Week”.  Her main theme is the need to rebuild a sense of belonging within a team where she argues that three days is the minimum required to rebuild relationships.  She quotes Hollowell’s use of human moments when two people share the same physical space and also quotes Weick’s statement that there is no such thing as an organisation, only the ongoing interaction among human activities.  She argues for ‘pizza lunches’ and mutual admiration and problem solving, and against cubicles in favour of newly designed open workspaces where “serious and playful activities” can place with readily available food and drink.

Now I don’t disagree with Nancy, but then there is a not inconsiderable distance between not disagreeing and agreeing which needs exploration.  We all know that personal disagreements and conflict can escalate quickly in virtual exchange, not least because the opportunity to withdraw is not available.  Social media threads escalate conflict quickly (I will confess to enjoying that at times) in a manner that would not happen in physical spaces with a greater range of interaction and stimulus and a chance to correct misunderstandings and more important sense them early.  At the same time, the ability to hop on zoom for an hour rather than engage in complex flight plans makes interaction easier in many ways.

But overall I don’t think we should be talking about hybrid working, but more about new ways of organising and interacting in different environments.  A hybrid is a fusion and involves genetic loss, while a siphonophore form is, well a colony that is either formed by its connectivity or its containment.

So that will involve a redesign of the physical space, but creative play spaces were done to death in the early enthusiasm of creating a learning organisation.  I have terrible memories of sitting on too colourful, too soft, too low foam rubber chairs in a lurid play space in the Ministry of Defense in Singapore to the embarrassment of all parties.  Over-designed and over here to adapt a WWII British saying.  John Seeley-Brown’s work in Merlo Park was more interesting when he placed wipe boards in an enlarged coffee area and tried cameras onto them that anyone, anywhere in the organisation could connect to and engage with.  Small changes to the way people connect within an established space.  In work I did in knowledge-based design for SKB many years ago we ended up with Clarks and junior staff having offices while executives were in open space.  For the former sticking things on the walls was a part of distributed decision making and they needed to concentrate.   In contrast, executives needed to overhear conversations in the main and interact.  Sipgate, one of my favourite companies pays good money to have a high quality and healthy breakfast available to all staff so that days start with casual conversations over food.  Using ordinary spaces for extra-ordinary purposes is more effective than trying to design a special space.  When I ran a business unity years ago I used to take everyone away for a weekend doing something outdoors (walking, pony trekking, etc) without facilitation and lots of pub meals followed by two days in a residential facility talking through issues and plans.  In Covid creating an outdoor well-ventilated space is a good idea full stop and you don’t have to end up on Dartmoor, the River Wye or the Yorkshire Dales to achieve it.

The key point I am making here is to use the familiar for something novel rather than creating multiple levels of uncertainty and discomfort through special spaces.  Make small changes to existing spaces, or do different things in understandable if not always familiar settings.  Cooking for your team also goes down well but don’t expect them to do the washing up.  But there is a lot more to this in terms of organisational development and design and I will pick up on that tomorrow.

Portuguese Man-O-War image courtesy of Islands in the Sea 2002, NOAA/OER., the 19thC drawing is by Lesueur both public domain, via Wikimedia Commons

I’ve always talked a lot about maps and the importance of managing the evolutionary potential ...

Yesterday I raised the idea of using a colony of different organisms that have evolved ...