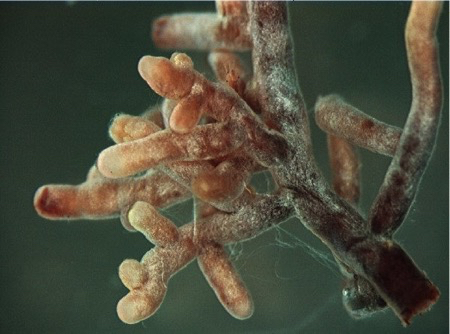 For most of my life I’ve been working with various forms of symbiosis and synthesis. Bringing the natural sciences as an enabling constraint to understand social systems is the big idea behind Cognitive Edge. Symbiosis, or evolved mutual interdependency has always fascinated me and the idea is central to today’s post. We are currently using mycorrhiza as a metaphor for one of several new, post merger initiatives within Cognitive Edge. I’ll be posting on these as well as normal service for the rest of this month. The work associated with the merger is the main reason for my too long absence from this blog. For those unfamiliar with the idea the a mycorrhiza is a symbiosis between a fungus and a green plant. The plant captures and transmits the energy of the sun to the fungus which reciprocates with water and various nutrients. I could have used the Portuguese Man of War or many other examples but the visual here works well for a key new development with SenseMaker® namely a narrative based learning, reflection and feedback mechanism which is at the Centre of this new approach. Done well learning is messy, blending fragmented experiences and learnings over time through multiple network and the root system portrayed demonstrates that well.

The text below is currently subject to revision as we settled training strategy in February.  All of the principles and much of the process still apply but it will change.  When I does I will blog again and everyone on the mailing lists will be informed.

To provide the context for this: training has long been central to Cognitive Edge with various approaches tested over time. For many years we had a popular four day programme which required my presence in past. Last year we experimented with a shorted method focused course. In part that was to reflect a shift in the market from early adopters who love theory to a more mature need that wants method. But we still faced issues with scaling in particular how to maintain quality. In parallel with this a lot of people were training in Cynefin without our direct involvement – some brilliant, some good, some dire. We have also faced increasing pressure for some acknowledgement of the investment in training from companies and individuals alike. Now for years I have (and intend to continue) lambasting certificates given for attending courses, completing open book multi-choice questions etc. but I have always said, especially if challenged, that I am not opposed to qualifications provided that they reflect real learning and experience. In the early days of Cognitive Edge we tried to achieve that with essays but that didn’t scale and didn’t reflect practice. So for the last few years we have been prepared to confirm that someone has been trained but have refused any statement as to the quality of the individual involved.

A couple of years ago I started to develop an MBA alternative that will launch one day – if I can ever wade through University bureaucracy which turns out to be worse than IBM! In that context I developed the idea of using SenseMaker® to record learning experiences in narrative form within a cohort group. Sharing links, sharing experience and creating a body of knowledge not just for the cohort, but for others over time. Linking that with a distributed approach to 360º feedback – a modification of Leadership service. The latter would provide feedback to the individual and the combination of the two would provide an audit trail that would allow an objective measure. With such as system we overcome the issues with multi-choice questionnaires (easy to mark but not really reflective of learning) and move away from the issues of bias and scale that go with personal attribution. So when we got together to work out how to move forward that was an obvious element to bring into play.

We then made a few other key decisions:

Astute readers of this blog will recognise the apprentice -journey(wo)man-master pathway that defined the medieval craft halls and all modern professions. Would you want to go to a Doctor who had just attended a course and filled out a mult-choice question? Better to know that an extended period of learning through practice compliments evolving knowledge. It is far more that demonstrating the ability to retrieve information.

We still have stuff to work out here – but the idea is to create a programme consistent with complexity theory which can (but does not have to) lead to certification while avoiding the traps of certified for attending and other such schemes. The focus on linking with other programmes and courses, but sharing the narrative is a true symbiosis and provides us with opportunities to intermingle the roots with other methods and ideas. We will be announcing masterclasses shortly to link Cynefin and the various Cynefin™ artefacts and processes with Wardley Maps, Theory of Constraints and OODA. I’ve also opened up conversations about one with various thoughtful people in the Integral movement, so not Wilber cultists!

More on this and other scaling initiatives over the next few weeks, but the next three days I am at the festival of Philosophy and Music at Hay-on-Wye. We had a fallow year in 2017 but now it is back albeit in shortened form and we have a house party of friends to extend the discussions over wine, whisky and gin into the early hours of the morning. I’ll be blogging on my learning and some of those discussions over the next few days and then I’ll return to the scaling question and my Alice series on scaling Agile. Now we are completing the merger I will hopefully not be wiped out with keeping the business running and dealing with lawyers so more time to write, more time to think.

PS: It’s not your day to be paranoid

One of the family traditions we developed during my teenage years to provide some constraint within the extended family was the it’s not your day to be paranoid response to family members and friends who were exhibiting the tendency. The response to any request to have a designated day was the anglo-welsh non-verbal equivalent of Mañana es otro día. As news of this initiative trickled out over the last few days we’ve had a few (less than ten that we know about) examples of people in the network attempted to claim such a day. So to deal with their concerns I’ve added this post script.

Way back in IBM days I (and thankfully my boss and sponsor) made a key decision to but the Cynefin framework into the public domain. When I left we had a gentleman’s agreement that I would take all my work with me and IBM would get free access. Some time later I discovered that I really should have had some ‘gentle’ people sign up to that in blood as IBM trademarked Cynefin and claimed ownership of everything. After extended and tortuous negotiation I gave up trying to reach and agreement. So anything which wasn’t public domain got abandoned and I went back to the original source material, and a lot of new material, and started again from scratch. In retrospect that was one of the best things to happen to me post IBM although it didn’t feel like it at the time. Years later the IBM trademark lapsed and I was content to leave it there. However over the last few years, as the use of the Cynefin Framework grew it has attracted some parasites including a few trolls. There was some rumour, and some fear that someone else might try and grab the trademark (as they had some of the domain names). So we are taking a defensive action here to preserve the framework and its name. Better we own it than someone else.

As to those who jumped onto the certification issue, please read the above and all of my blogs on the subject. I’ve got a few certificates myself (three to be precise) two from Universities and one from a professional accounting body. I could add the letters after my name but I don’t and all three came from rigorous study (and in two cases practice) over several years. My beef is not with qualification per se. In knowledge management days in several debates I argued that no one could offer certificates in the field, but they could assess competence in an approach or set of methods. We are offering no certification in complexity theory, but a pathway to a certificate in our approach and methods. You can’t get it by turning up or some token test, you will need multiple peer and client reviews over time and a diverse self-managed learning programme. Downstream I hope to link this into a University qualification.

If there are any questions on this feel free to leave a comment, email me or connect on social media.

Anyone subscribed to the mailing list should have had an invitation to the first Train the Trainer session coupled to our retreat in Whistler on Design and Creativity next month. Anyone who has been on any of the training to date is qualified for Train the Trainer (and the retreat is open to anyone). We’ve had a lot of bookings in the 24 hours since the mailed went out so if interested an early response would be good. If you haven’t had the mailer then get in touch

Click here​ to register for the Cynefin™ Train-the-trainer and/or Cynefin™​ Retreat coming to Whistler, BC, Canada from 24-29 June 2018.

If you are not getting the newsletter then you can subscribe here.

It’s been two very busy weeks (lots of big changes to be announced next week ...

One of my better ideas last year was to put together the first Cynefin Centre ...