So to the end of a productive week in Melbourne, after a gentle start life became hectic with a four day course and two academic presentations plus important meetings over dinner.   There is something about that sort of pace which improves presentation delivery.  Using the same material to different audiences over a compressed timescale is rather like the twice cooked style so beloved of asian cooking; it improves the flavour.   By the time I came to the Melbourne Emergence Group  (I was a founder member many years ago but this was only the second meeting I have been able to attend) I was pretty much on fire and really enjoyed both the presentation and the question session.   The whole thing ran for three hours and gave a real chance to explore some of the wider implications for society of complexity thinking.

Come to think of it I have done some of my best presentations in Melbourne.  The Appreciative Inquiry variant of the Childrens' Party Story was created here along with other things.  If you get a good audience the feedback loops benefit everyone.  I suspect that Australian audiences in general, and Melbourne audiences in particular have a similar sense of humour and benign cynicism to yours truly and in consequence the whole thing rocks and rolls.

Mike has also been here videoing the whole course to gain material for YouTube and also for premium members.   He produced the original material that you see on YouTube so it was a good chance to update things.    Mike is a professional director/producer (used to work for National Geographic to give you a sense) and now has new equipment which reduces the need for a crew.  He has also done a few interesting projects using our methods and SenseMaker® and is a good friend.  If you want to know why I support Port Adelaide in Australian Rules you can blame/thank him!  Aside from the course we also set up in another meeting room to create video's of each of the sub domains and then this morning before the flight we used the carpe deim cafe next to our apartment to video Michael and myself talking about SenseMaker®.  Its a great cafe by the way, really friendly and helpful staff, good food and as you can see a great ambiance.    More on the new videos when they come out of editing.

Either way that complete I got on a Virgin Flight to Sydney, watched an episode of Arne Dahl on the flight after dealing with the paranoia of a stewardess who thought I might be filming her exit row briefing!  On arrival it was then out to the coast with Simon and Saffron for lunch, a walk and then dinner.

The walk along the coast gave me a real appetite for the bush walk I plan along the coastal path in the Royal National Park tomorrow.  The surf was high and the evening light was a real treat.  As you can see from the picture bellow it lit up the houses overlooking Bondi Beach.   More photographs of this trip can be found here for those interested and I love the new Flickr interface. 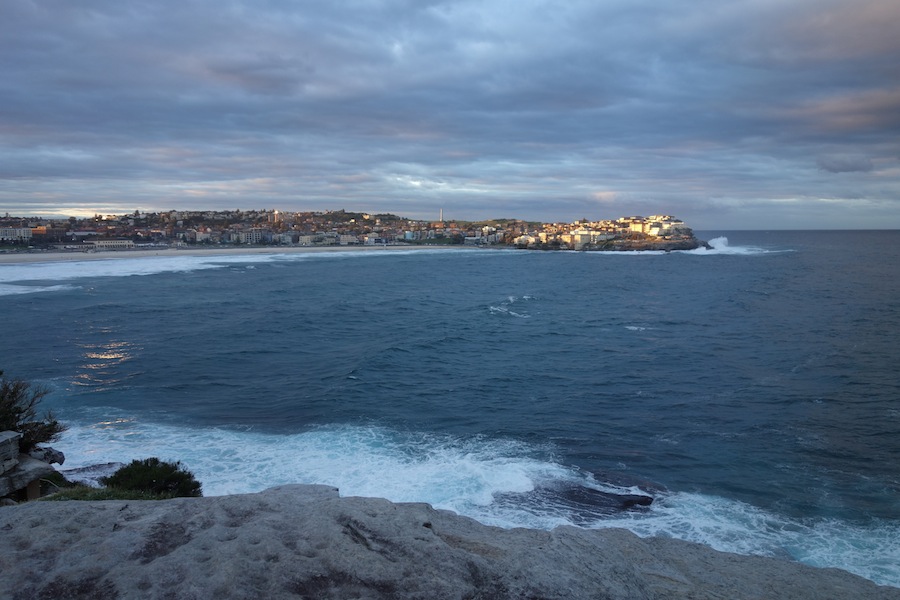 So in the last in this series of updates, we move to the chaotic domain. ...

After far too long I finally got to do a long distance walk today after ...