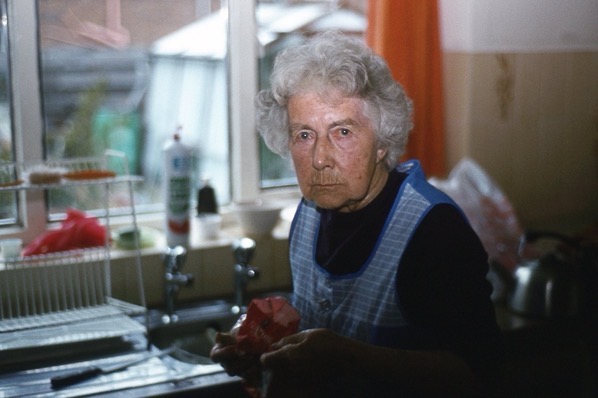 Yesterday I mentioned the family history with reference to my mother fighting for her chance to be the first in her family to go to University which got me to thinking about the family and I then realised that today, the 10th was my Nan’s birthday, one she shared with my cousin Peter.   I’ve no idea why we called her Nan as the Welsh is Nain, which is what my children used for my mother but there it is.  She was an indomitable character as I think her picture to the right shows.  She had grown up in the country where her father was Head Gamekeeper to the Maquis of Bute.  He was then the richest man in the world who build castles for a hobby and plated one tower room with gold (and I mean plated not leaf) with a ceiling comprising multiple precious stones.  He had come up from West Wales from the Bute’s estates and had reached one of the pinnacle points of the servants’ hierarchy.  I have his family bible and previously wrote about the history.  I won’t repeat myself here other than to say that when they were cast onto the streets by the Bute following my Great Grandfather’s heart attack she ended up in Cardiff Docks which was a notorious area.  The banner picture shows one of the docks in a state of decay, taken on my Round and Through Wales walk, but in its time it was the largest port in the world, and one of the richest, as Welsh Steam Coal for the world’s ships was its main export.  It was an area where the police went in threes, but also one of remarkable racial harmony.  The family managed overtime to save enough to leave for Precisely Avenue where they created the family home.  I think their two daughters were old before they moved there and they were ensconced by the time of WWII which given the bombing of the docks was probably a good thing for the family.

Her husband died before Mum left University so I never knew him, but signing over the family house to my Aunt she then spent many years moving between her two daughters – is it out turn for Nan? was a frequent question as we knew the quality of the food would go up immediately and her Chelsea Buns were to die for.  She was a harsh teacher there, when I entered the Boys cooking competition for the annual school Eisteddfod she took me in hand.  I can still remember the pain of having to hold a bag of ice for what seemed like an hour, but was almost certainly less, to get my hands cold enough to make the pastry. The pain was worth it as I won first prize and Apple and Blackberry Pie has remained a featured dish ever since.  If she wasn’t with one of her two daughters she was on holiday, acting as unpaid space labour, with her sister in Cornwall, but we always got sent a tin of clotted cream so we looked forward to that as well. 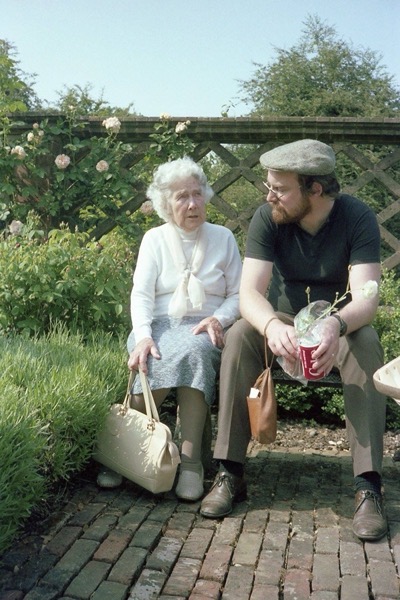 Her breakfast was always two slides of thinly cut bread lightly spread with butter and a pot of tea.  My father was popular here as his training as a Veterinary Surgeon meant he could cut more thinly than the rest of us.  My sister or I used to then trot up to her bedroom with it on the tray.  But on the rare occasion, we stayed in a hotel en route to a caravan or cottage she would say everything on the menu saying Jimmy’s paid for this.  Jimmy was my father.  She had a real hatred of waste which goes back to those early days of poverty but could whip up delicious meals with any manner of leftovers.

We spent a lot of time in Cardiff when I was young, sleeping on the floor of the three-bedroomed house with a sofa bed and camp beds (my fathers from when he served in the Veterinary Corp in the Kashmire during the War) brought into play.  A large part of my childhood was trips to Cold Knap and Barry Island Fair, not to mention the walk to Victoria Park where we tended to congregate as children.   To this day I do not know if I belong to North or South Wales as I was brought up physically in the former, but emotionally and intellectually in the latter.  I’ve talked about that a few times, but most extensively in this post. There are also memories, I was in Cardiff and can still remember where I was standing in the house when the news of the Aberfan disaster hit.

After I left University, got married (picture to the right) 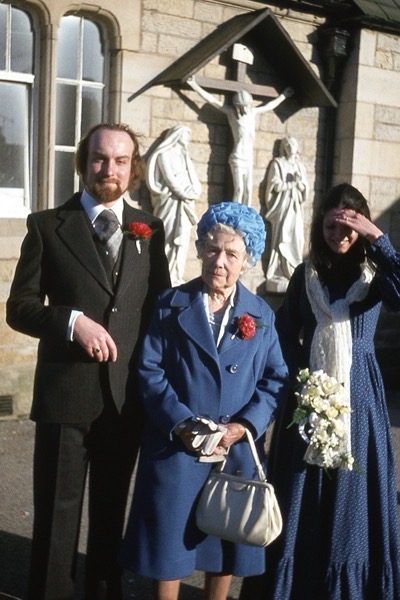 and eventually ended up in St Albans she was getting on in years but she, along with my father and wife were enthusiastic and if I may say so immoral gardeners.  The sheer amount of cuttings she took illegally and stored in her handbag doesn’t bear thinking about.  The picture to the above and to the left I am especially fond of as we say and talked for a long time in the garden of Hatfield House when she was down on a visit.  If the picture had been taken earlier I would have been smoking my pipe which she liked as it reminded her of her husband.

She had her downsides, as I reported yesterday she didn’t understand why my mother wanted to go to University and fought against it.  She saw the role of women to marry, give birth, and provide a home.  If we had guests she spoke in the most excruciating English accident – the influence of the Welsh Not in teaching her to despise her own culture.  If Nan didn’t like something or disapproved of it then you knew about it, but you always knew she would be there if you needed her.  And no one ever left any house she was in hungry as not feeding a guest was considered shameful, even if the family then started for days after the guest had left.

So in memory of grandmothers everywhere, and my Nan in particular I dedicate this post.  Also to set a context for the current crisis over COVID and Popularism, if we think about what her generation lived through then it may give us a sense of perspective. 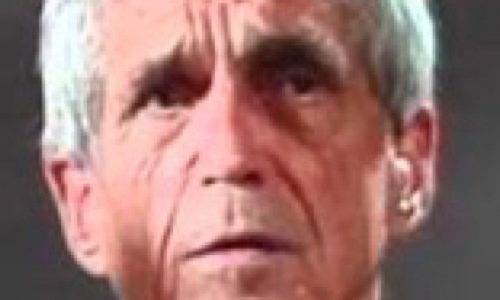 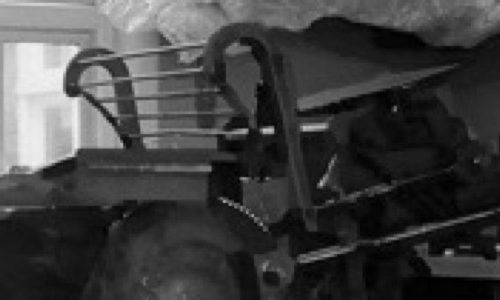 Earlier today I got irritated by several things on social media. I admit that this ...

My post of the day before yesterday expressed concern about the general dumbing down of ...