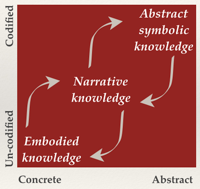 I’ve been using this slide for some years ever since it emerged from a conversation between Max Boisot and myself in a cafe in Sitges. When I stayed with him we used to walk down to the town and use the paper tablecloths as an exploratory space. Given that I drank wine and he refrained he normally got to keep the tablecloth! In practice the form of the model comes from Max’s I-Space and he accommodated my work on narrative in this representation.

To cut a longer story short the contrast is between highly codified and abstract knowledge, such as a map and the low codified highly embodied knowledge of a London Taxi driver. The Map can be used by many people provided they understand the basics of the symbols used. However they will always be outpointed in terms of speed, resilience and adaptability by the taxi driver. But (and this was key in the early days of knowledge management) the ease of diffusion reduced the training and apprentice costs of creating taxi drivers. Hence the emphasis on codification that has persisted to the current day.

Now I have long argued that we need both and that the narrative approach we adopt to knowledge, especially using SenseMaker® acts as a half way house between the two. Much of the resilience of the taxi driver with significantly less cost to use. I was making that point in the training course yesterday when the thought struck me that the position you take on the model is also a statement about power.

If you need to tacit capability of the taxi driver then you have a two plus year training programme and the power in the relationship is with the possessor of the embodied knowledge as they cannot be easily substituted. On the other hand if you invest in the process of abstraction then the cost goes down and the sacrifice of speed and resilience may be worth it for lower costs and dependency. All well and good and you can see this argument in some of the supporters of UBER and other such approaches.

But we make a serious mistake if we think that massive disintermediation transfers power to the consumers. Even assuming that is desirable (and as an absolute it is not) then in fact the real power is the person who owns the language or the means of abstraction. If they can create a monopoly of that then dependency is concentrated and focused, not diffused. So in thinking that you have democratised a process you may well have done the opposite. It is not just services such as UBER, it is also who controls the language (a primary means of abstraction) within the community? Dominant language games are about power because they restrict the freedom of actors to the constraints imposed by your abstraction.

More to think about there, but it tied a few threads together for me

For some time I have been arguing that the study of complex systems in humans ...

I landed at Heathrow this morning to pick up a message from my sister attaching ...