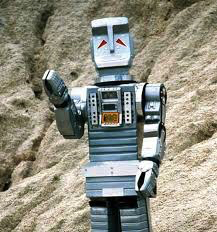 My post of yesterday induced a marvin-moment in one respondent. For those unfamiliar with the term it is a reference to Marvin the Paranoid Android from A Hitchhikers Guide to the Galaxy. I’ve chosen images from the television series with is more authentic to the original radio series that the film both in terms of the story and also the representation of one of the create characters. Marvin probably has the most memorable lines of any character in the book with Life? “Don’t talk to me about life” one of the most memorable, along with various phrases starting “Here I am, brain the size of a planet…”. He contrasts with all other possessors of the Sirius Cybernetics Corporation’s ‘personality chip’ who are cheerful to point of inducing vomet.

In a sense Marvin is one end of Aristotle’s Golden Mean – any human quality is the average of the quality not present and the quality taken to excess. It is an approach we use in SenseMaker® in dyads to disguise hypotheses and common beliefs that can then be tested. The point is that total paranoia is unhelpful (even if they really are out to get you) as is absolute naïveté in which everything is taken at face value. As with two many human polarities we tend to the extremes which in practice we need more context sensitivity. So as with sea-wall v salt marsh from yesterday I am creating an artificial dichotomy, or rather dichotomies, with a view to a more contextually sensitive way of assessing team (more than individual) capability and the need for balance. In another sense it is another plank in my long running campaign against the idea of context free competences for any profession, but for leadership in particular.

Paranoia can be disabling, naïveté fatal and having survived a few large corporates I would tend to the former over the later. It is also linked to our tendency to assume that they do things deliberately with malice aforethought while we are well intentioned although accidentally we sometimes get it wrong. Conspiracy or cockup? Multiple variations of the dichotomy exist in common speech as well as more archetypal in the literature. I often found by the way that those who most virulently demanded naive acceptance were often the manipulative bastards who my mother should have warned me about. Mind you as a good local politician and master of guilt inducing stares she may have decided not to – but (to use a family tradition) its not my day to be paranoid.

Allocated days for paranoia are a good solution by the way, we had four family members so everyone got a day, with space over for rest of guests. Providing roles, ritualised with costume or verbal form, is one way to reduce the negative impact of extreme behaviour. Humour is a wonderful tool in the armoury of change.

Now I’ve started this series it is going to be difficult to stop ….

When we lived in St Albans, way back in the days before children, we occasionally ...

So its late at night after a longish drive up from the Arms Park and ...