After far too long I finally got to do a long distance walk today after a month of travel with little free time.   I'd also forgotten to pack any walking gear which created a conundrum last week.  Normally I might just have bought something, but the rapid weight loss means I really don't want to waste money so aside from lightweight walking trousers and decent walking shoes (although not boots) I ended up managing the whole day with the iPad bad stuffed with water bottles and a semi-smart jacket.  I did buy a head torch as insurance though.

I'd bought a guide book in Melbourne as I had originally planned to go into the Blue Mountains, but then I came across the Coastal Walk in the Royal National Park and a little bit of planning showed that it was doable.  The only problem was that it is winter and close to the shortest day so a north to south walk was not possible with an early enough start time.  The southern start provided a hard stop with the last ferry leaving from Bundeena at 1800 and that meant an early start catching the 0519 to Otford from Central here in Sydney.  All the guide books said it was a long day and recommend a two day walk so I was a bit nervous about the end point.   But thanks to the Bennett for offering an emergency rescue service I was relaxed. 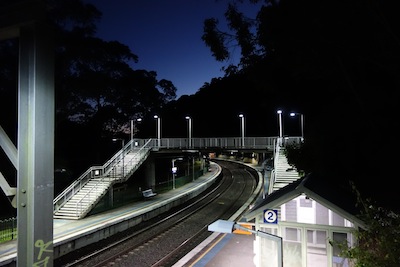 Now that was an interesting train ride.  I was the only person on it not wearing a black skinny dress suffering and suffering from alcohol poisoning.  The good news is that everyone was asleep so I hope they all wanted to go to Kiama as I doubt they would wake up before the end of the line.  I arrived at Otford at 0620 with the first glimmers of light starting to show in the sky and set off up the hill for the coast.  I needed the head torch for this but it meant I got the boring tramp up the fire road out of the way and started the coastal path in the morning light.  The crash of the massive surf was with me for the whole walk, even when the path went inland for sections.  I love the sound of the sea and I really miss it living in the heart of Wiltshire.

As I joined the track to the Otford lookout I chatted briefly with a woman who had parked her car there and was getting equipped for a winter walk.  Treking poles, rucksack, emergency shelter and the like.  I felt ill equipped and got a sense of criticism!  I suppose its all relative, from my perspective this was a summer walk along a well marked coastal trail.  Mind you I missed the treking poles later and I really must remember to pack them for future trips.  With a promise to talk again as our paths crossed I moved on. 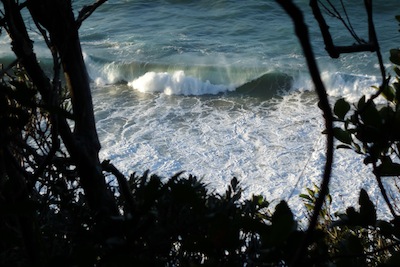 I was also trying out the new Sony RX100 camera.  I needed something with a full sensor frame that I can pack easily when I don't have room for the Nikon 7000 and this seemed to fit the bill.   Certainly the results are much better than the iPhone or my old Nikon Coolpic.

The other bit of technology was MotionX-GPS which cost me virtually nothing and allowed me to download the whole route on the hotel wifi.  Given that Australians seem to believe that selling walking maps is some sort of admission of failure this was a life saver.  I also really liked the interface but it took me half an hour to find out how to switch off the voice coach which wanted to tell me my average speed and distance travelled, in a very annoying voice, every give minutes  I tried five major walking shops in Sydney and while one (yes only one) had maps at the right scale they were hidden away in a filing cabinet in an obscure corner of the shop (shades of a Hitchhikers Guide here) and the one I needed (and a lot of others) was out of stock.  In the UK I could buy an OS 1:25000 in most corner shops in a walking area.  So I carried the guide book as a backup. 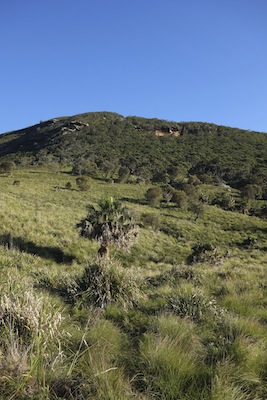 The first section of the walk to the recommended overnight camping spot at North Era was just under 8km and was estimated at 2.5 hours.   I took three plus and was starting to worry about the arrival time.  However that first section was the hardest with the most climbs and the section through the palm jungle was a pain.  Putting one foot in front of the other in a narrow gully with vegetation up to your knees was hard and progress slow in consequence.  The scenery was more than adequate compensation however but I was starting to put the guide book in the same category as Irish walk guides.  I fondly remember one description of the approach to Carrauntoohil: “there then follows a breezy ridge walk which requires some scrambling skills”.  An hour later as I was navigating a gendarme, holding on by my finger tips over a thousand foot drop I realised the book had been written by someone who went on Everest expeditions. My guide book merely remarked that all variations of the track ended up in the same place.   They may have done so, but the number of cross gullies meant the possibility of breaking your ankle was high! 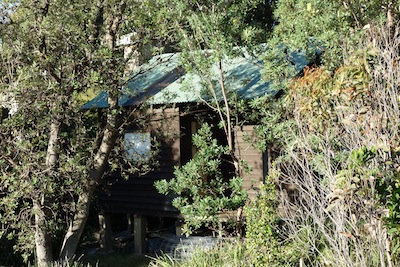 The picture above was taken just before my collapse into a mud bath as a result of one of said gullies and it really gives no sense of the difficulty of this section.  Given the snake warnings not being able to see the path or your feet had an element of danger about it, but I made a lot of noise simply my the nature of my progress or lack of progress so I was not greatly worried.

Exiting the Palm Jungle I started to come across the various cottages built there by out of work miners in the Great Depression.  They used local materials and survived on fish from the sea.  Now weekender cottages they seem to fit into the landscape, although were mostly empty which surprised me given a sunny weekend.

After North Era the walking became a lot easier and the sea views increasingly spectacular.  A lot of it was on metal walkways or flat rock and you had to be careful to keep an eye to the track but it was wonderful walking.  By now other people were starting to appear heading south but I must admit I think the south-north routing is best.  You get the hard stuff over early and then arrive a Bundeena in the evening light for the charming ferry and more important shops selling cool water! 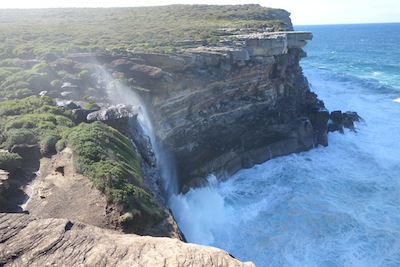 With the slow progress I was still worried about the last ferry but the pace was now picking up and as I passed the Eagle Rock, which was my half way marker I knew I was OK.  Form this point a lot of the walk allowed you to go right to the edge of the cliffs which gave access to some spectacular shots (see right) and the noise of the waves would have prevented any conversation.  The other delight from here was crossing many a stream flowing across flat rocks with pools and vegetation proving an invitation to linger and reflect.

The downside was Garie Beach and Wattamolla where car parks give access to the coast and the path either side was more densely populated with people than I would like.  I also should have bought some more water at Garie Beach while I had a chance.  That said, in summer, the dammed pool above Wattamolla would have been very tempting for a cooling off dip. 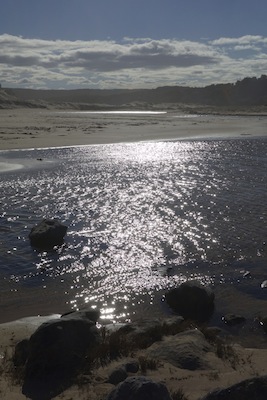 Now the only difficult walking was the soft sand crossing some beaches.  The climbs were short and assisted by rock steps, the unfolding view of the sea crashing onto vertical cliffs a siren call to keep walking.   At the end if was almost a disappointment to turn left away from the coast and head down to Bundeena where water, macadamia nuts and the ferry rounded off the day well.

My legs were hurting given the months absence but it was only a short train ride back into town and the bath in the Hilton, thank God for baths at the end of a long walk, a shower never satisfies!  It was a good walk and I made it much within the guide book time which is good calibration for the next time.   I also have two guide books and there are a lot of walks here.  But next time I will remember toi bring treking poles, a ruksac and a better light weight walking jacket.   Mind you I would not fancy that walk in the summer heat, maybe the Blue Mountains and shade for that

The full photo set is here for those interested.  I'm pleased with the camera, but I am still learning to use it!

So to the end of a productive week in Melbourne, after a gentle start life ...

To explain but not excuse

I had a whole series of blog posts mapped out to fill in the month ...