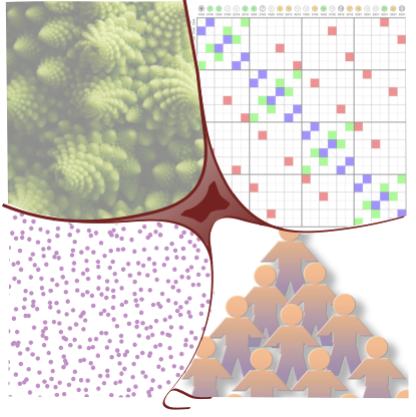 I was driving Sonja back to Cape Town airport this morning after a very useful session yesterday with Marietjie and Zhen working through various ways in which we can visual data from SenseMaker®. We took advantage of my being in South Africa for a client project and Zhen being over to teach Stellenbosch University (a new partner) the basics of SenseMaker® projects. We met on Marietjie’s house (with vineyard and olive grove) just outside Stellenbosch and mixed good conversation with business and excellent wines. More from that as we start to roll out standard offers powered by SenseMaker® over the next few months. There will also be some material in the forthcoming Cynefin and sense-making course in London.

We were talking about various ways in which Cynefin in explained and I mentioned the tetrahedron models that came from Cynthia Kurtz’s first encounter with Cynefin. They were used to illustrate organisational structure in the New Dynamics of Strategy article that we published in an IBM journal. My initial reaction to their value was sceptical, but one needs to respect one’s co-author’s views. After a period of scepticism I started to use them on courses but after some years my initial nervousness returned. They were leading people to prescribe organisational types by domain and that sort of categorisation always worries me. A hierarchy for example is more than able to handle complexity if it focuses on the right things, but it can never fully constrain or control, something that is possible in the ordered domains. Either way I stopped using them around five years ago, but their use persists and Sonja challenged me to come up with an alternative.

So after I dropped Sonja off I set off for a four hour road trip with the camera (restored from its dip into a tidal pool near Sydney) around the Wales spotting coast and back over the mountains. I’ll link to the pictures when I have loaded them at home tomorrow. I was listing to an audio book of Swallow Dale, which I know by heart anyway so between stops for pictures of waves and penguins I had a chance to think about. Settled into the lounge at Cape Town I had a chance to play around with a first draft of an alternative. To be clear I don’t think this is it yet and I may go to a graphic artist or cartoonists for something simpler and more usable. But it is a first step.

The opening picture shows where I got to, using different images to make a point. In a sense this follows my recent post on killing sacred cows in organisational development so I will include aspects of this as I develop it on days one and three of the above referenced course. So to the domains:

It is far from complete, the cliff needs to be right and disorder is probably a black hole but it is a start. Open for comment and feedback

Now I am just starting here, more work to do. I may keep a variant of the tetrahedrons, but they just don’t work for complex.

One of my favourite subjects at school was physical geography, a taste that grew into ...

I just came off a conversation with our lawyer about contractual arrangements for the new ...