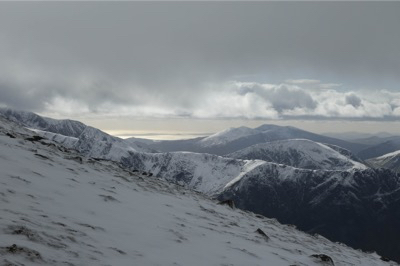 The weather forecast today did not bode well: rain/Sleet at low level and heavy snow above 600m. Left to myself I would have attempted a low level route ready for an early exit before the long drive home after a week working and walking up in North Wales. However my sister had pinged me the night before saying that there was a Ramblers trip planned for Y Garn from Nant Peris and did I want to go. The route was a novel one for me; I’ve been up Y Garn many a time but always from the Ogwen Valley. In bad weather my normal policy is to take an easy to navigate route where there are likely to be other walkers. Walking on your own is a great pleasure but it does carry additional risks and I am less blaze about those risks at sixty than I was a few decades ago. So the route was novel, the weather was forecast to be bad, the leader was an experienced alpinist and there would be other people in the party. All in all an opportunity not to be missed: that was the good decision.

I’ve been a member of the Ramblers all my life but this was the first time I have been on one of their walks. Those around Wiltshire never really appealed so I was not used the norms. The party assembled in a car park at the head of Llyn Peris and after some discussions on matters of taking or not taking ice axes the party set off. The pace was less that I was used to, but that was better than if it had been more! The climb up the side of the valley was uneventful aside from seeing the rescue helicopter out on a mission although this time I was not involved and was hoping not to be! I did discover a cultural aspect, namely the desire to stop for elevenses. I normally never stop, even lunch is eaten on the hoof. But birthday cake (sister’s) was welcome. Coming out of the glacial valley we hit the snow line with little visibility. No one else had been that way so we tracked over snow fields on a compass bearing, plunging from time to time into deep snow. Following in the footsteps of someone heavier being a good policy as unexpected drops to waist level were less likely. We finally, and fairly strung out, made it to the top to meet a couple of ice climbers who had done it the hard way up the North-West Buttress. Lunch followed with mass donning of crampons. Coming up had been OK, a couple of times I was tempted to stop to put them on but you don’t slip too much going up and we were on the leeward slope which means soft snow not compacted snow and ice.

They were really necessary on the descent north. The difference between walking confidently or slithering on your bum with an anxious eye on the cliffs to the right. Supporting those without crampons became a duty of those of us with. The walk would have been justified for the ascent alone but now the skies cleared and the views of sun on snow on mountains to the right and the left were stupendous. At this point my bad decision became evident. I had taken the small Sony rather than the full frame Nikon. The light was such that I really, really wanted the Nikon plus the 16mm and 50mm fixed lens not to mention the telephoto. The weather was never wet and I could easily have taken them but I had played safe. No time for repairs before Nepal in two weeks time.

It was a good day and also a confidence building one. After the best part of twenty five over weight years away from the hills I am still getting back to earlier levels. After today I’m much happier taking on this type of winter walk solo. But I have also realised the pleasure of Ramblers company. Before I have only walked with close friends or family. So on future trips to North Wales I will join in again. Less sure of that in Wiltshire however.

The descent complete I picked up Emma from Bangor and dropped her off in Whitchurch for a surprise Mother’s Day visit then got home around 2200 after a brilliant day. The last real exercise I will get before heading up to the Anna Purna sanctuary. Arriving home I took iPhone, rucksack and three bags in one hand. Trying to manipulate the house key I dropped my iPhone and the screen cracked. I’ve dropped that iPhone all over the world, but only at my back door does it smash. That means tomorrow I have to spend time seeing if the screen can be replaced at the Apple Store in Reading. This is the third decision and the worst as Sunday is my only full day at home before May!

The next two weeks are a nightmare with two return trips over the Atlantic interspersed with a side trip to Norway and finishing with a week in South Africa. No rest for the wicked when I come back either as the day after I have to be in New York, then Banff, then Paris, then Bangor, then Durham, then Nice then Sydney. I am paying for taking holiday ….

Wedding anniversary today and whilst I am away I did at least remember the flowers. ...

To the ducking stool

It is interesting to see old habits manifest in modern clothing. Back in the 17th ...