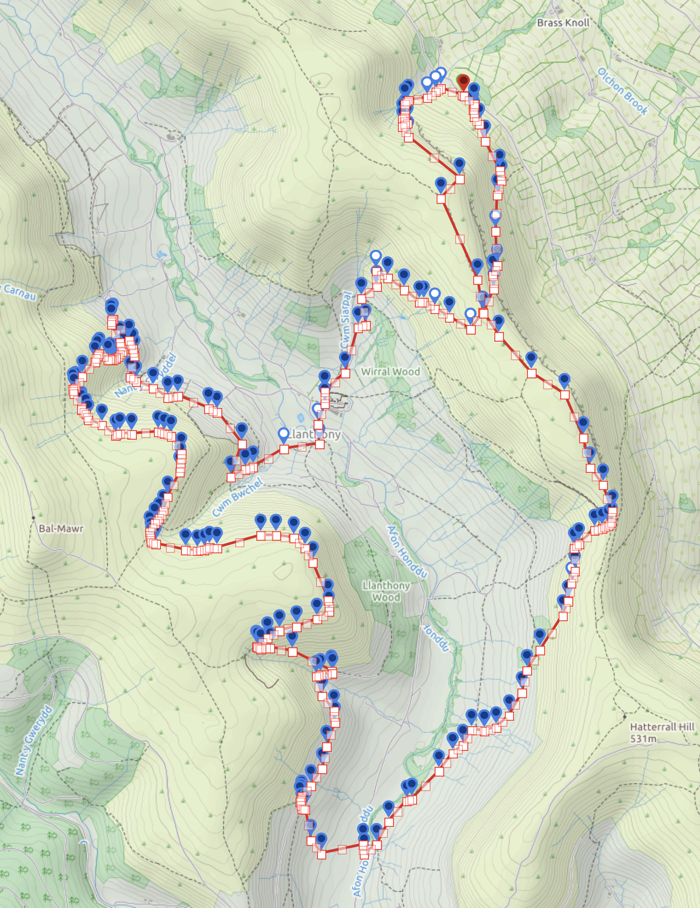 This is not the second part of the re-wilding post, but a building block towards it.  It addresses the issue of organisational change using, in the main, a mapping and navigation metaphor.

Earlier today Paul and I were exchanging ideas for a walk in the Black Mountains using .gpx files.  I work with ViewRanger as it has more flexibility over the maps you use (so Harvey’s maps as well as OS ones not to mention their own topographical map used here) whereas Paul remains stubbornly comfortable living within the constraints of the Ordinance Survey Application.  Disputes on maps accompany us on walks, along with how to navigate and general gear debates to the great enjoyment of both parties and the occasional amusement of those who are with us.  Although we have noticed that they either stride on ahead or fall behind out of earshot with increasing frequency these days.  The .gpx files allow us a means of translation and what you see to the left is the result of my suggesting three or four modifications to a route originally mapped by Paul.  In normal times I would be writing this blog post after a Saturday walk or the night before a Sunday one but these are not normal times and all we can do is plan and hope.

The key point here is that we have maps of the whole territory and we have walked over most of it in the past.  In terms of the geo-morphology of the area, things are pretty stable and the post-glacial landslips that create much of the uniqueness of the Black Mountains are not likely to repeat.  If we kept to the main pathways then there would be no surprises, but the path planned out below takes us into areas less frequently walked which gets more interesting.  OK a couple of times we have ended up in pretty impenetrable undergrowth and I remember one walk where the only way of checking where Brenda’s location was my monitoring the occasional glimpse of a blue bobble hat that emerged from time to time above the ferns.  If we get heavy snow things will change, rivers can also flood but like all good walkers we have contingency plans and alternative routes we can follow.  Critically we can as needed change our goals.  In both the Lakes and Snowdonia I have been forced by bad weather to exit into a different valley and either walk or hitch ten or fifteen miles back to the car; better to be late than benighted on badly injured.

Now we can contrast that with Alexander Mackenzie who achieved the first European crossing of the Rockies where there were no maps, although by then he could measure latitude as well as longitude.  Or think of the early hunters and trappers who did not have the benefit of native guides or navigational instruments.  They are dealing with higher levels of uncertainty, and more significant consequences will arise from failure.   Setting out with a sense of manifest destiny creates additional levels of uncertainty and risk in part due to overconfidence; the unintended consequences may not result in the physical cannibalism of the Donner Party, but metaphorically many an organisation change initiative has suffered from the same hubris, with very similar results.  For the OD department, it may be the lesser sin of survival cannibalism, whereas ritualistic and sacrificial cannibalism might be more associated with the constant cycle of change initiatives on which too many consultancy firms depend.

All of which brings me to the promised theme of this blog, namely how to take the ecological rebalancing ideas of the rewilding movement and apply them to organisational design, with a smidgeon of anthro-complexity thrown in for good measure. Or at least that was my intent and then I realised that I needed to get some more basic material up first.  Let’s start by looking at reasons why a change might be needed, and I am ignoring any because the consultants told me so reasons.  I am also talking about organisations rather than governments, for the latter, there are significant differences but I will come to that in future posts and we have a major Cynefin Centre programme launching on Government and Governance that will be announced shortly.

Now the last two of these I will be talking about more in a few days time when Managing complexity (and chaos)
in times of crisis A field guide for decision-makers inspired by the Cynefin framework is published.  [Now available here]  This has been a joint effort by the Joint Research Centre (JRC), the European Commission’s science and knowledge service, and the Cynefin Centre. It aims to provide sense-making support to the European policymaking process but has wider application.  The new Cynefin Centre website will be up soon and will have details of the Field Guide as well as events and other activities related to take on.  I am going to be distracted next week working on that material so posting here may be infrequent in consequence.  You’ve had no Cynefin books in twenty years and now two come along within a few months and Mary Boone and I are completing a five-volume proposal to go to publishers in the near future.  Feast and famine as they say.  Signed copies of the first are still available by the way.

The first three have been the norm in my experience, although the first is only just starting to emerge and cycles back a little to the last two which will provide an additional incentive.  The major problem with most change initiatives is that while the driving motivation may be as stated the catalyst is often the discovery of a new magical solution.  One of the latest is the idea of Purpose which is a classic example of rebranding the glaring self-evident with the aura of novelty.  Linguistic games such as this have been common over the last few decades and generally do little lasting harm.  Most employees have learned to play the game while carrying on as normal.  It can be more damaging if you get major process changes.  I once coined the phrase that Sharepoint is to knowledge management as Six Sigma is to innovation and SAFe is to Agile which I still stand by to this date.  In fact, all three are an attempt to create a universal ordered practice which is a mistake as there are cheaper and more effective alternatives to all three that leave space for contextual variation of practice., or in two of the three cases they may have an application but in limited contexts.  I suppose the good news is that such contextual variation always arises in practice, but the energy spent in appearing to conform with the new cult is all wasted.  This is an example of the first sin of organisational practice and I list three such sins below.  I may add to these in future posts by the way, but this will do for now.

I’ve lived through all of these in the past and a few have scared my soul but I have survived.  I’ve also managed significant businesses where if I got things wrong people would lose their jobs.  I’m still proud of getting through the 80s with only two redundancies and keeping Cognitive Edge going through the hard times has not been without sacrifice. There is always a danger that you make too many assumptions if you have experience and forget that people new to management are looking for some form of scaffolding around which they can start their own journeys.  The coming Field Guide is a significant step to providing that, but pending that I want to pick up the navigation theme again by way of providing some structure.

So what should you do?

Remember we are talking about the first three motivations, not the crisis management ones.   One of the most core and fundamental differences between anthropology-complexity thinking/practice and the engineering and causal framing of systems dynamics and cybernetics is the simple statement that we start journeys with a sense of direction rather than trying to achieve goals.  The banner picture shows what faces us most of the time in any change initiative.  There are some desirable points on the horizon, but the detail is clear.  We have a pathway through forests with mist and multiple unknown qualities that will follow us on the path.

Knowing where you stand and what capabilities you currently have is key here.  If you are on unstable ground or at high risk you need to move.  The general advice in the mountains is to put on crampons or spikes on level ground before you really need them, but if you have neglected that anticipatory action you have to balance up the risk of fitting the crampons and slipping in the process or slipping without them anyway.  I’ve lived that choice a few times and its never easy.  The anticipatory action is the most important one

There are five key questions that you have to ask before you embark on a change of any type and I’m still on the hiking metaphors in the main:

And of course, and critically, those questions may have different answers in different parts of the organisation.  You will know that the answer to all five questions is in effect an audit of where you are before you even start to talk seriously about where you want to go.

All of this means that there are some critical things you have to put in place, and do so quickly:

Obviously, the balance and urgency of these will depend a little on the original motivation for change but all have utility as part of ongoing management.  The various methods are all being moved into the wiki and per my previous post we will be announcing soon to one training in all those methods for people prepared to work on the content of that.

I’m aware that in my last post I said that I wanted to start to look at creating a language of eco-system design for organisations that allows for sustainable systems to evolve over time.  That still needs to be done, but when I started to write it I realised the above had to be written first!  I also need to post specifically on geomorphology to go with the whole re-wilding material so part two will be later in the week and will hopefully cover both

Mapping is a screenshot from ViewRanger

The banner picture of fog in Hirzel, Switzerland is cropped from one by Ricardo Gomez Angel on Unsplash

I’ve given a fair number of talks over the last year around the general theme ...