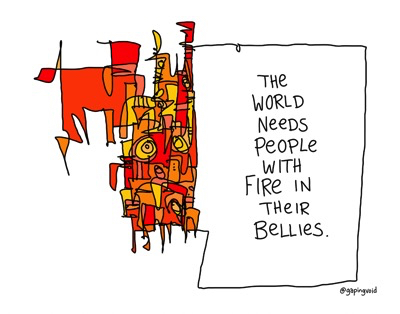 I promised in my last post to pick up the question of ethics, and more specifically in the context of complexity theory. Interestingly I was talking about this with my daughter Ellie over the kitchen table earlier today and we were exploring the way in which aesthetics is an integral part of ethical discernment; more on that later. One of the points I made in my last post on meaning was the lack of a common reference base. A, shall we say, constraint of the last resort that allows a community to move forward. Ellie then sent me William Davies paper The Emerging Neocommutarianism (The Political Quarterly Vol 83 No 4, Oct-Dec 2012) which is a fascinating read. He makes the point that Hayek, the de-facto founder and high priest of neoliberal economics, ‘possessed a pragmatist (and pessimistic) sensibility, which assumed that principles, ethos and metaphysics were useless, possibly even meaningless, in the absence of concrete institutions and political instruments to give them a physical presence in everyday life’. Further, in respect off neoclassical economics Davies asserts that it is ‘predicated upon a subjectivist (indeed, relativist) theory of value, that the worth of any good is represented in the pleasure it provides to the person who consumes it. It adds to this a behaviourist theory of action, that those experiences of pleasure are adequately reflected in observable choices.’

Now some of the implications of this may not be immediately clear. A characteristic of the modern age is the idea that anything goes, a form of full on social constructivism in which anything you find useful is OK, or opinions are equally valuable and so on. In effect this subordinates ethics to economics and more specifically to transactional value. The idealists who want to be open may not realise the degree to which they have been suborned to neoliberal ideology but they have. Davies quotes Hayek: ‘the fundamental principle that in the ordering of our affairs we should make as much use as possible of the spontaneous forces of society, and resort as little as possible to coercion’. At the extreme we get the Randinista assumption that the role of the state is solely to protect socially atomistic choice.

So where am I going with this? Well two main thrusts here, one relating to ontology influencing ethics and the second to the role of abstraction, which includes metaphor.

Now I have a lot more to say about this, in particular the issue of developing critical capability which I see as key. But that is enough of a place holder for now. The reason for the Gaping Void cartoon is that we need passion, ethics is not a quiescence acceptance or what happens, but a desire to achieve change.

on meaning from a realist perspective

Yesterday’s post received a gratifying response, thanks to all who volunteered and I will be ...

Today’s offering from Gaping Void is wonderfully enigmatic and could be a source for a ...