Of honey pots and pits 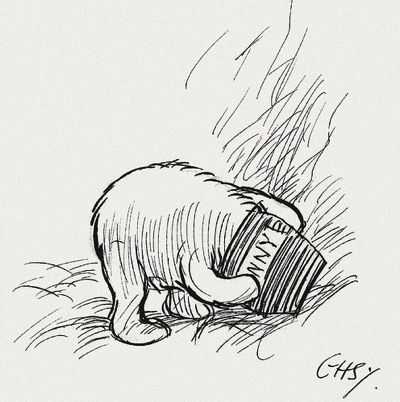 Help, help!” cried Piglet, “a Heffalump, a Horrible Heffalump!” and he scampered off as hard as he could, still crying out, “Help, help, a Herrible Hoffalump! Hoff, Hoff, a Hellible Horralump! Hell, Holl, a Hoffable Hellerump!

If you don’t immediately get the reference and remember the story then you might want to read it before proceeding. Pooh and Piglet’s Very Deep Pit baited with honey, is intended to catch a Heffalump. In the end it simply captures Pooh who, head stuck in a empty honeypot, appears to an incredulous piglet as the much feared Heffalump and panic ensues.

The memory of the story came to me when I was thinking about the landscape idea I introduced in the second of these posts on post-conflict resolution. I was probably partially pattern entrained by the elephants to yesterday’s post, a fact which is also appropriate. Now this may be a little confused as a post, but lets try and sort out some features of a landscape full of deep dispositional states, deep enough to form pits. There are three types that we may find:

The metaphor could be taken too far, but it helps people visualise a disposition state and to differentiate by types. If we look at the first one then early stage radicalisation moves through progressive commitments until there is no turning back – often the first murder or crime. From the point of view of prevention you need to stop people getting captured by the shallow attractor in the first place. But States rarely get that, allowing inequality or oppression to run unchecked until it is too late. But in these series I am talking less about prevention and more about what you do to recover. In this case you have two simple choices, punishment or forgiveness. The former perpetuates the conflict, the second may create a very different type of conflict in those who have stayed on the side of the law. Their feeling that those who they see as criminals have gotten away with it can create a problem for the peace process or even a secondary terrorist group. The process in South Africa allowed go immunity for confession and has been held up as an exemplar. I buy the success, but the lack of substantial change in the wider inequalities of that society may have undone its good. The very public confession to sin may or may not have been cathartic, and that is probably case dependent. One of the things I am working about is confession within mind groups and certification of contrition. That would allow a degree of privacy so less threatening but involving the same psychological process. It means that people in the confessional groups have to be trusted by all parties but I suspect the greater intimacy would allow greater empathy. I’m working on that as a formal method and possibly using some aspects of resolving paradoxical retelling of the past by those engaged. More if, or rather when, I get a chance to experiment with that.

The point about this type of dispositional state is that it doesn’t need a honey pot in the pit itself, the attractors are more likely to be negative (dislike of something and reaction) in the shallow attractor well. I contrast the second is a choice by the victim, the second a choice by the protagonist. Intention is purposeful, less accidental. More design, less exploiting an opportunity. The first has a lower energy cost but the non deliberative nature means a there but for the grace of God went I policy is possible. For everyone who is radicalised there several who could have been but didn’t. To change the narrative from I did good, you did bad to there but for the grace … is a large part of the process, in the other two cases we may reasonably assume innocence or some form of insanity in the original fall. In the latter case we allow for context determine something which is not natural in most legal systems. Most also reject entrapment as legitimate.

Then of course the pit may not turn out to be as terrifying as we first thought ….

I’m still thinking aloud by the way, this is not a paper, a book, or a fully formed set of methods. I’m exploring.