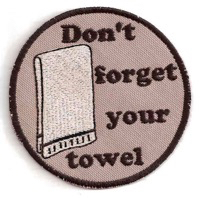 Berlin has always been one of my favourite cities since I used to cross under the wall back in the 70s for various WSCF meetings. Compulsory currency changes, avoiding doing anything to draw the attention of the Volkspolizei ( and realising that an error could cost friends their livelihoods, possibly their lives. Then we had the intense political conversations in beer-kellers late at night, or over sausages cooked by street vendors on the Ku’damm. We used to stay in a hotel, or rather rooms that I am sure was used as the set for Cabaret! Fond memories, but also it was intense.

Now with the collapse of the wall Berlin is still an exciting place but more laid back. I’ve been back a few times for conferences and more recently for two long sessions with agile42. The name itself is an ironic reference to Douglas Adams and at their most recent event all the stewards were carrying towels. If you don’t understand the significance of that then you need an emergency emersion in The Hitchhiker’s Guide to the Galaxy.

I was there, not just to talk about the work of Cognitive Edge, but also to investigate the possibility of my becoming an advisor to them on strategy and also to create a more formal partnership both for their operational use of Sense Maker® and also participation in some of the research programmes we will shortly be launching from The Cynefin Centre (working name for the last year has been The Centre for Applied Complexity which I launched yesterday.
I’m pleased to say that the session went well and thanks to the patience of Marion and Andrea as well as the efforts of Sonja, we are now in position to announce a formal partnership. The main elements of this are:

And then of course, it gives me an excuse to get back to Berlin from time to time.

This picture was taken two weeks ago on Easter Monday when the trekking party of ...

I’m finally getting on top of the backlog of email and writing after the Annapurna ...