Complex human systems, such as organizations, communities or economies, can be modeled as networks. Network nodes can represent system components, while system interactions, such as flows of knowledge, influence, information or relationship, can be represented by symmetric or asymmetric network links. 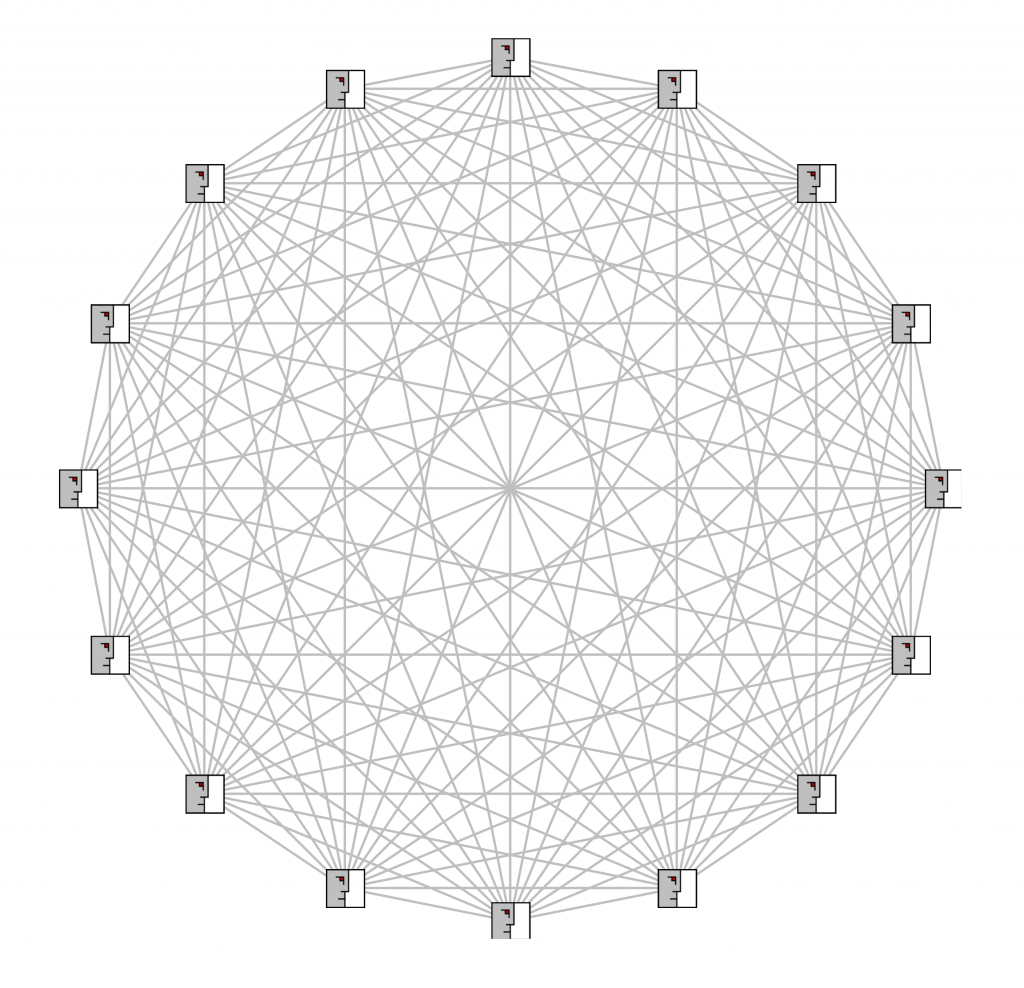 From our decades of experience working with various networks, we find that as the number of nodes increases the number of connections for each individual eventually plateaus – we only have time and energy for a limited number of connections to others. Some people make more connections than others, but everyone has a limit . You might be connected to everyone else in a group of six, but as the group grows your number of interactions does not scale linearly with the size of the group. Figure 2 shows a more typical count of interactions amongst the people in this group of 16.

Figure 2 – Typical Amount of Interaction in a Group

Social media vendors also make the mistake of over-estimating their “community” and claim to have a single community of 2 billion individuals!

There is no such thing as ONE community of 2 billion people! A better estimate of Facebook’s community structure would be 50 million communities of 40 persons each. Many of these communities would not be connected to each other in any meaningful way, but some will have bridges or members in common.

Like Legos, we can build very complex system models, with simple network pieces that fit together in an almost infinite number of ways. A small pattern of links forms the building blocks of networks. Networks are built with triangles.

The first triangle is shown in Figure 4 – it represents no connection between a collection of components/nodes that show up in the same place. These people might be in different networks, or they could be in the same network, but are only connected by very long paths in the network – there is no relationship or awareness between these three distant nodes . Figure 4 could be three new employees in an organization. These “satellite” nodes are probably orbiting on or more connected networks. 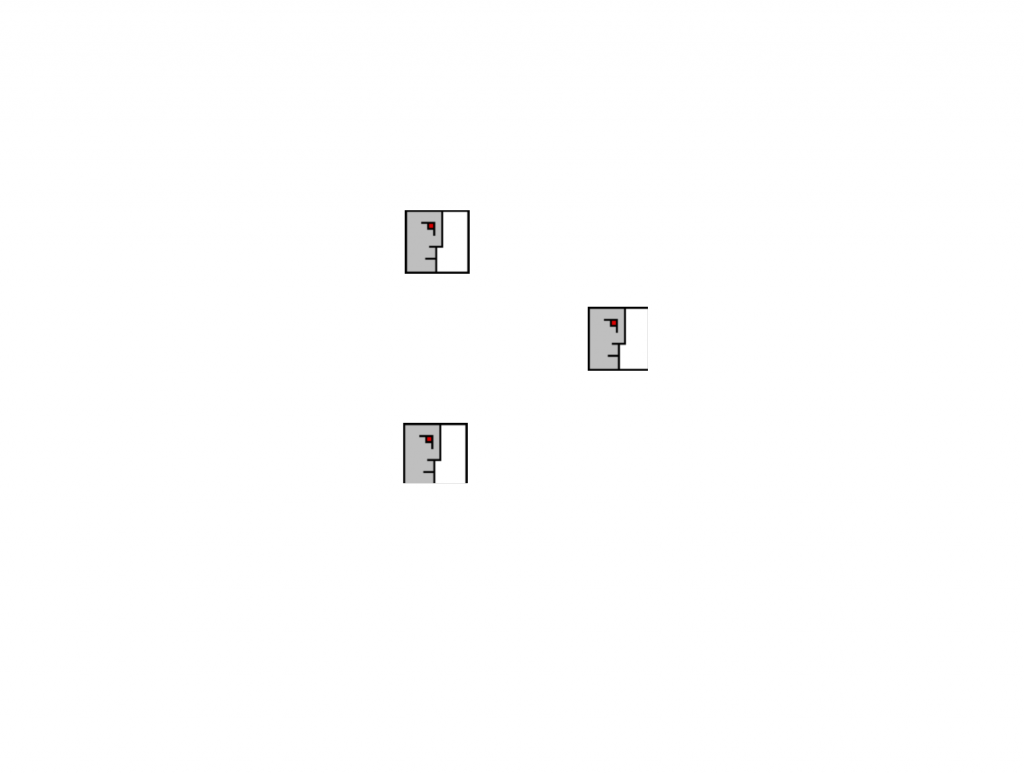 Next we see a triangle with one link, connecting two of the three nodes. We see this pattern in new forming networks that are very sparse. Links at this point in the network’s growth may be happening by accident (those close by in physical distance) or randomly. Strangers that see each other frequently, reside near each other, or have offices close by, start to slowly form ties as in Figure 5 below. 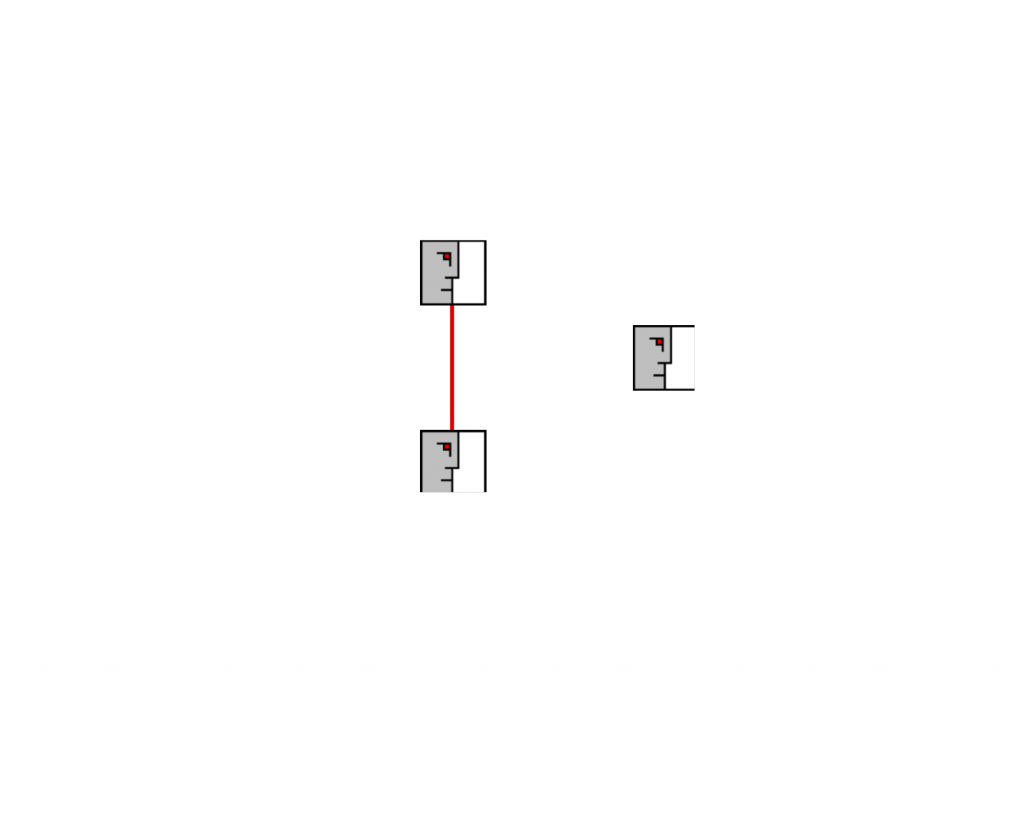 The next triangle shows a pattern that is quite popular in the networks we see – it shows up both in the periphery of the network, sometimes in the core, but most often between the core and periphery of a network. Person B knows both Peron A and Person C. Person B can “close the triangle” by introducing Person A to Person C – iff there is a benefit in doing so (iff = “if and only if”). 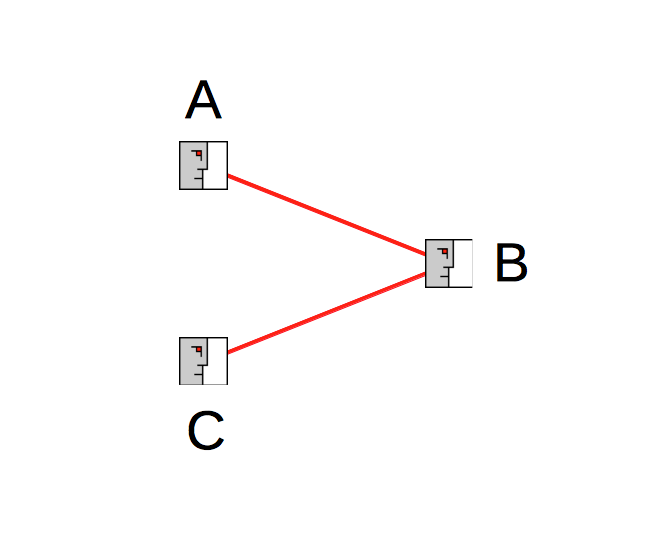 Open triangles are also called “opportunity triangles” because there might be an opportunity for the individuals or for the group(s) they are a member of, to benefit from the closing of the triangle. Though a triangle can be closed by luck or serendipity, usually the best way to make a connection is for the common colleague/friend to introduce the two who do not know each other, explaining to both of them why the introduction is being made and how it may be of benefit. Open triangles are particularly interesting when we are investigating innovation in/between organizations.

Finally we come to the completed triangle where all possible links are in place. This is a solid building block and is usually found inside the dense core of a network. Its strength is it’s resilience but its weakness is no/low possibility of change. Many overlapping closed triangles build a solid core, but also create an echo chamber where everyone knows what everyone else knows, and thinks like everyone else thinks. This can be efficient in getting known/simple things done, but as the organizational/community environment becomes more complex, this rigid structure does not adapt to increasing complexity. 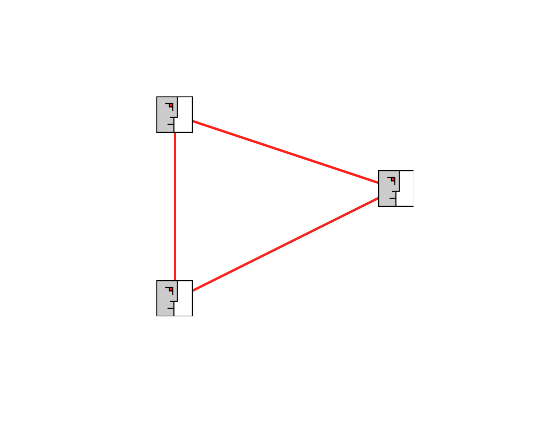 Yet, we found that a different distribution of closed triangles can actually help an organization learn, adapt and be agile in a complex “edge of chaos” environment. In high performing organizations, in rapidly changing environments, we found these closed triangles in places they “should not be”! Initially we were confused, but after several sense-making sessions with the clients, it was obvious why this strange new distribution of patterns worked so well.

First we look at the traditional hierarchy – the tree diagram in Figure 8. The grey links show the reporting relationships. Each node has a randomly assigned number instead of a name. 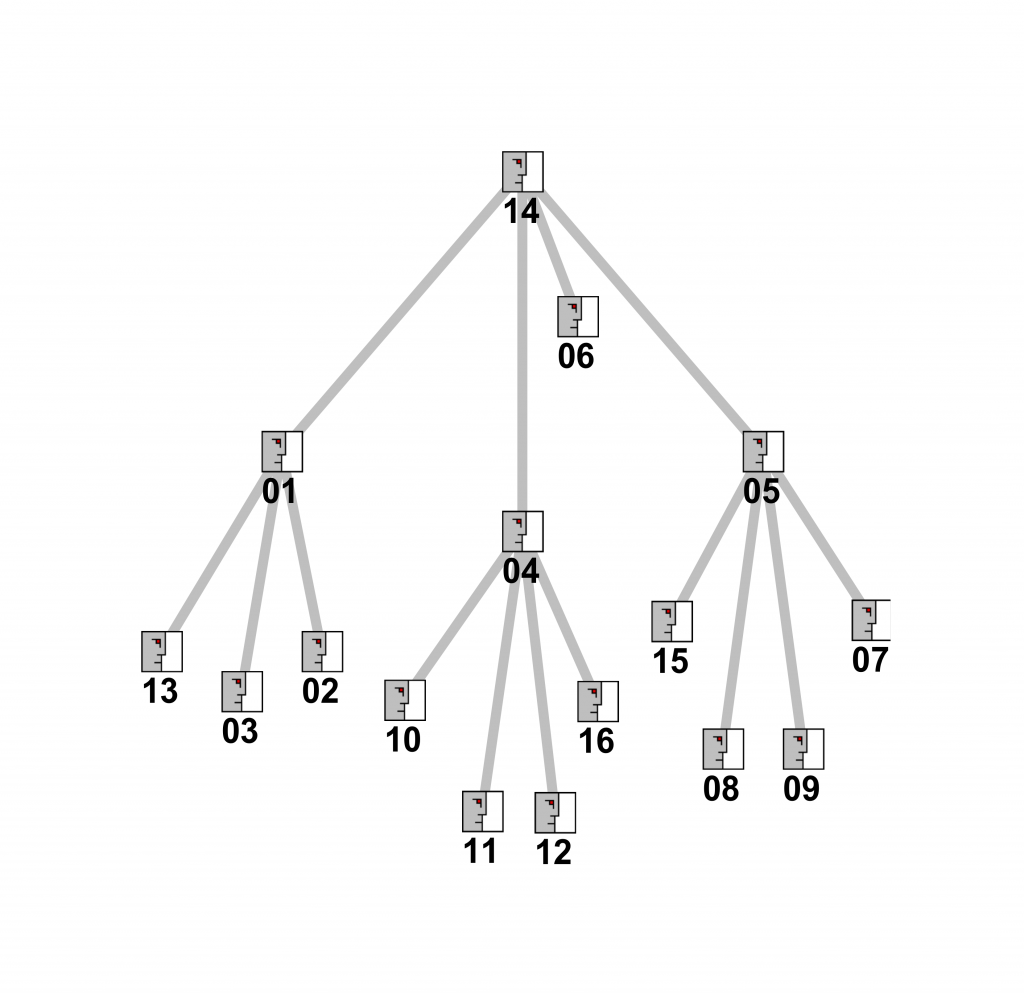 Thinking back about our discussion of the 4 types of triangles found in networks, what do you see in Figure 8?

We see something interesting, and somewhat counter-intuitive. What is it about the hierarchy? If you are still wondering, let us take a look at the second network for this organization – the emergent network. The emergent work ties are shown by the thin red lines drawn on top of the grey lines representing the hierarchy. 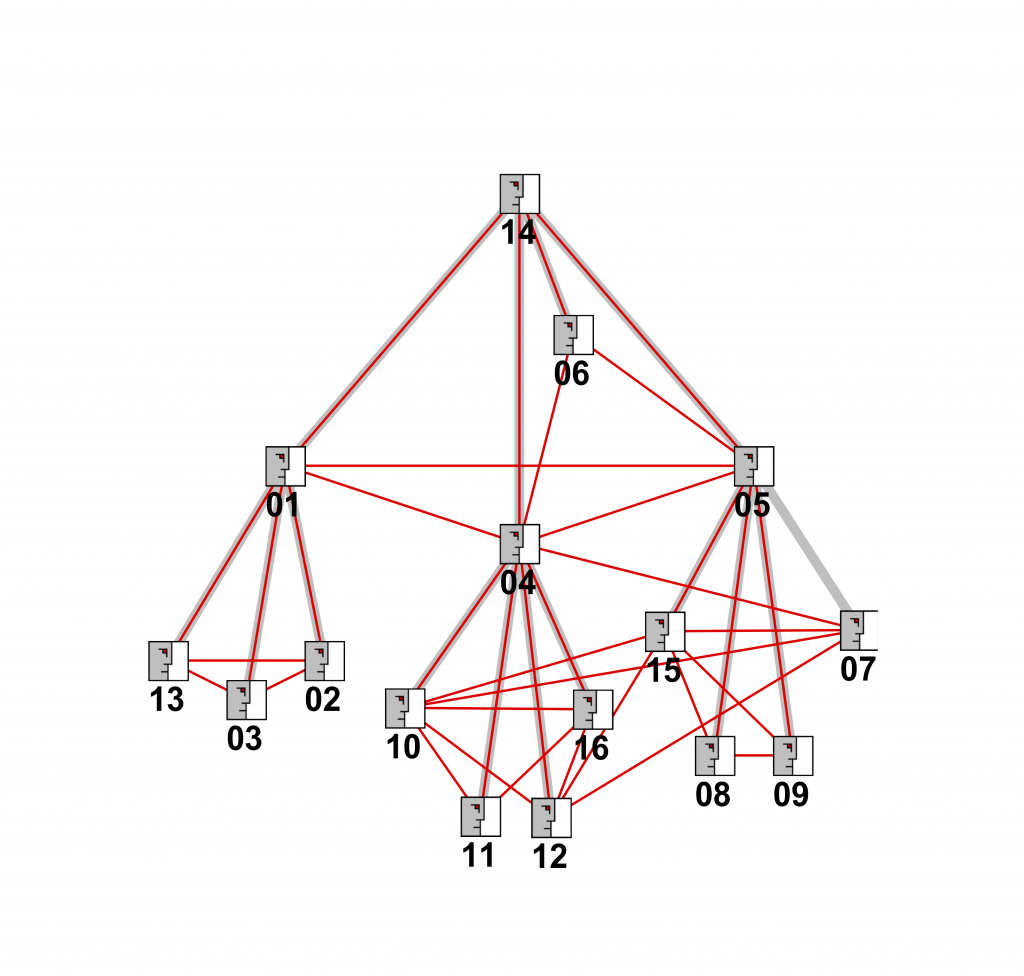 Figure 9 reveals that work and hierarchy have many of the same links (expected), while also showing us red links (emergent work ties) with no hierarchical relationship. We expect an informal human network, but we did not know where it will form! The red emergent ties happened over time, via a history of projects employees worked on together. The emergent ties reveal both a history of positive work experiences between two people and also the current work assignments, which require connecting outside of the hierarchy. The emergent ties are there because of both need and choice . Had the history of work ties been different we would probably see different choice ties that may or may not be a better fit for the current need ties.

There is another way to look at the hierarchy – we can view it as a hub-and-spoke network. Yes, a hierarchy is a network – mathematicians call it a tree graph. The same connections are present whether we layout the graph as a tree (Figure 8) or as a hub and spoke diagram (Figure 10). The person at the top of the tree graph (#14) moves to the center of the hub-and-spoke diagram. All relationship remain the same, we are just viewing it from another angle. In Figure 10 we also colored the nodes by their department and we highlighted the supervisory nodes in mint green. 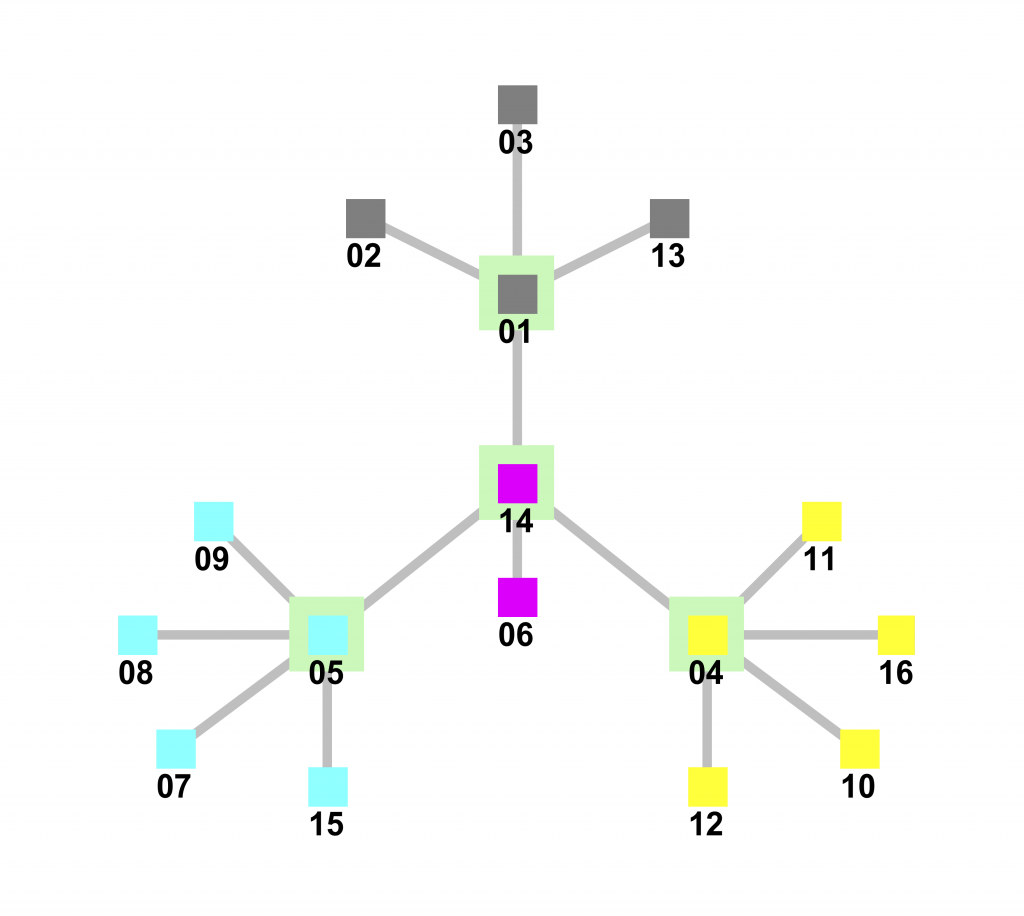 Figure 10 – Hierarchy as a Hub-and-Spoke Network

Again we see the hierarchical connections only. What is interesting about them? What do they provide for the overall connectivity of the organization?

Overlaying the emergent work ties network may reveal more about how the different departments are connected. Are their work silos in the organization? Are the right people working together? Figure 11 shows us another view of how these two networks intersect. 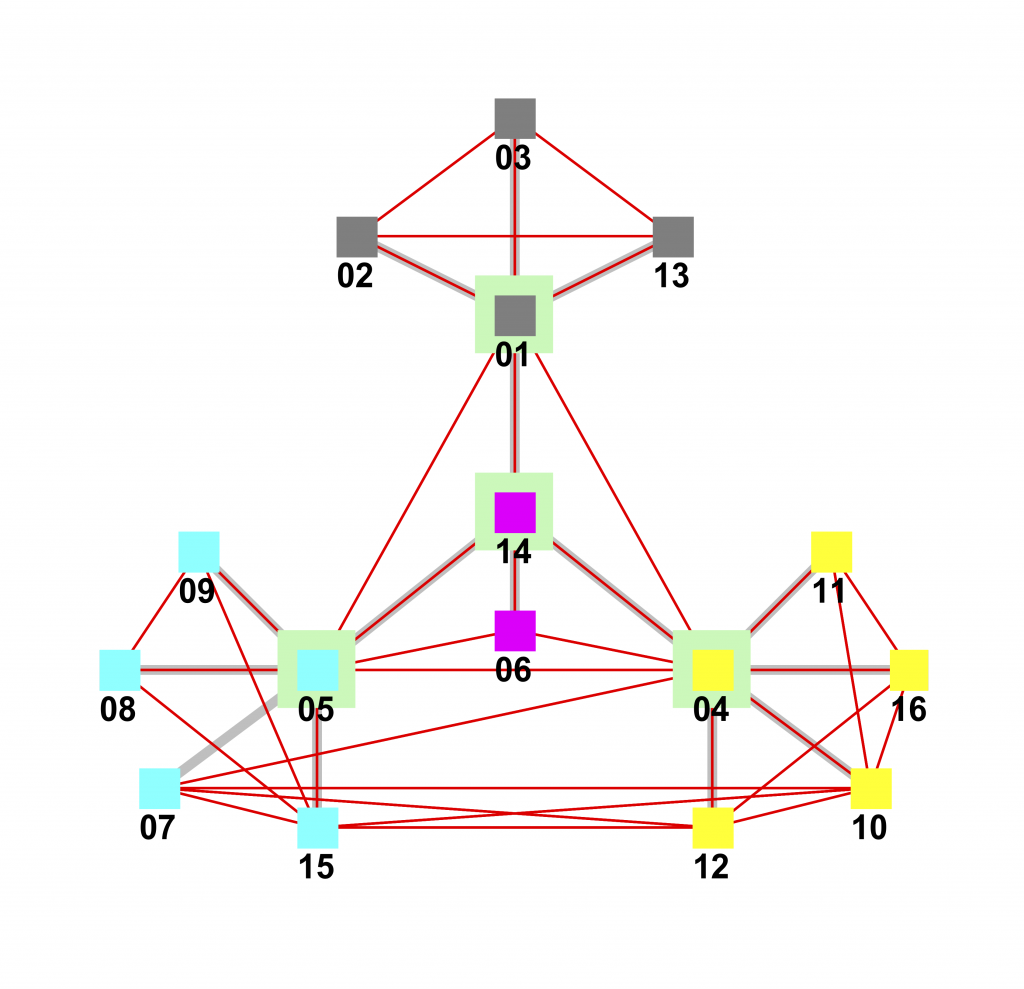 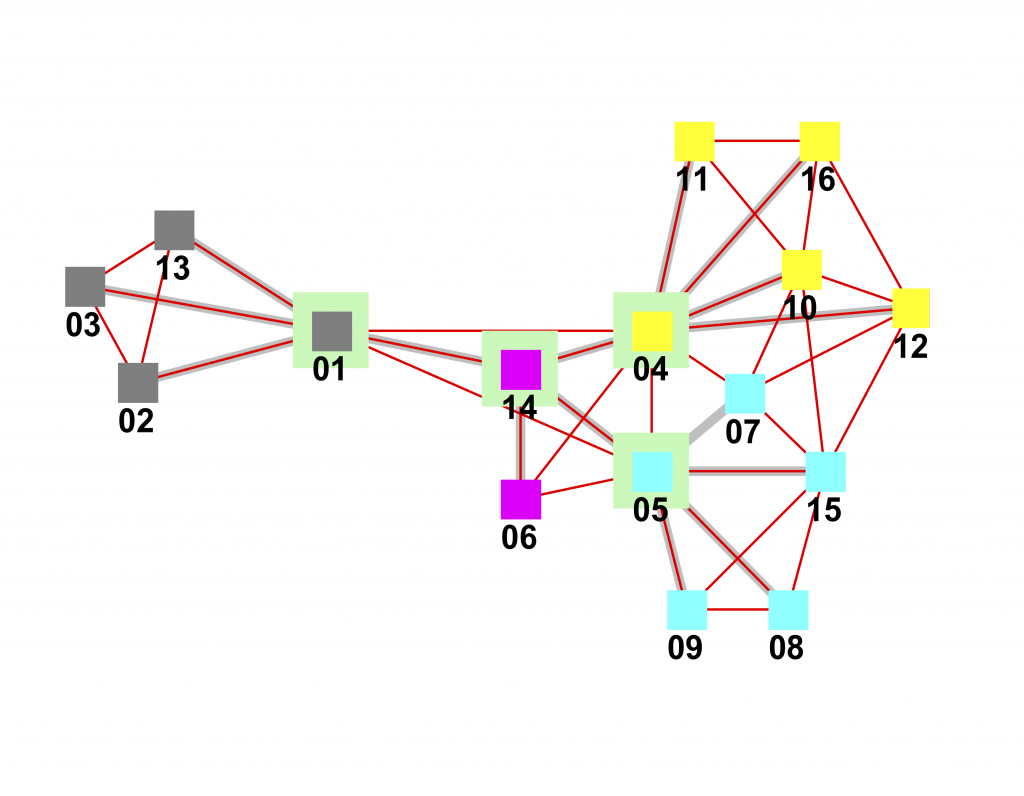 When we see a diagram like this we often do not know if our client intended this distribution of work. We see a large connected cluster on the right and just one department off on the left. That department is only connected to the rest of the organization via the department supervisor (01). We use these visual documents as talking documents with the client – we sit down together and discuss what we each see. Networks are great sense-making documents between the client and the consultant. The above diagram might reveal this is what the client intended. Or it might reveal a problem that s/he was not aware of. The combination of outside expertise and internal experience will determine what the documents say.

So, I asked back at Figure 8 what is so interesting about the hierarchical links?

They are ALL open triangles!

What was the other name for “open triangles”? Opportunity triangles.

In Figure 12 we can see how the grey links (hierarchy) acted as a base, or scaffolding, for the red links (emergent ties) to form. A hierarchy brings people together in common contexts. Maybe those contexts are departments, or project teams, or product groups? Either way, those with a common goal are brought together and through work they learn about the task at hand, and about the community of colleagues they are embedded in. Each project has a history that is not forgotten. Specific open and closed triangles may emerge for the current project and then they may go dormant, as other projects with other colleagues need to be done. But what once emergent trust is established former work ties can be rejuvenated for future work.

Figure 13 shows just the emergent links in the organization. Can you spot the various triangles described above in Figures 4, 5, 6, 7? 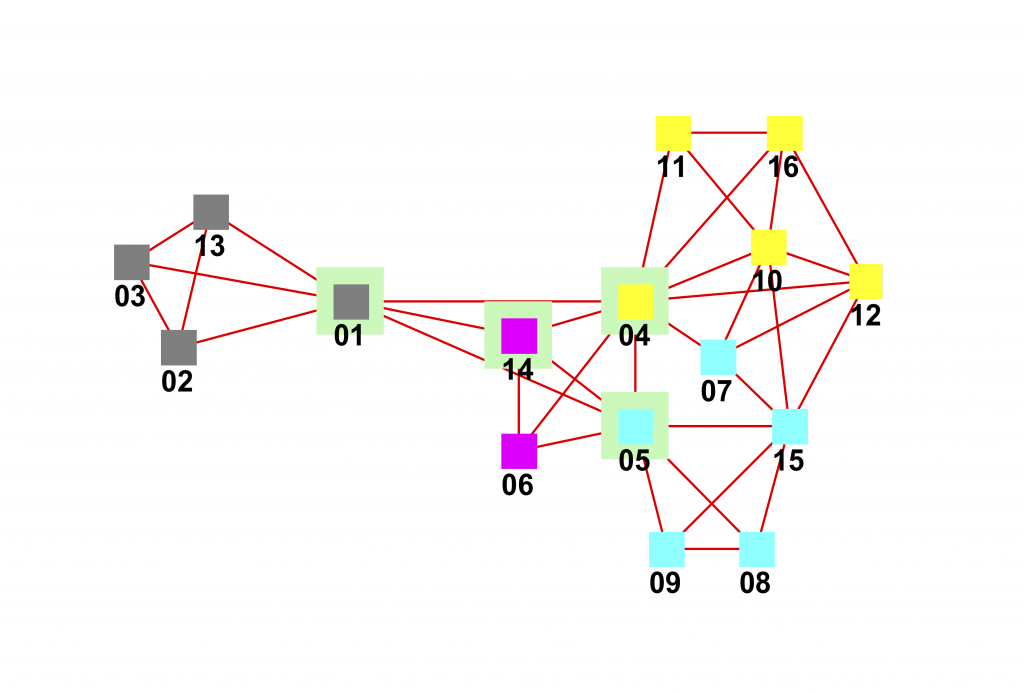 We see a closed triangle (Type 3) amongst nodes 01, 02, and 03, and there are others. An open triangle (Type2), with node 15 in middle, is found amongst nodes 08, 12, and 15, and there are others. A Type 1 triangle is found amongst nodes 02, 08, and 15. Finally, a Type 0  … this one is interesting. We are looking for 3 nodes where none of them are concurrently connected by any of the previous definitions of a triangle (Type 1, Type 2, and Type 3). How many Type 0 triangles are found in this emergent network? Bring your answer to the Exploratory during Feb-March 2021 where you can learn more about networks and complexity and how they interact. 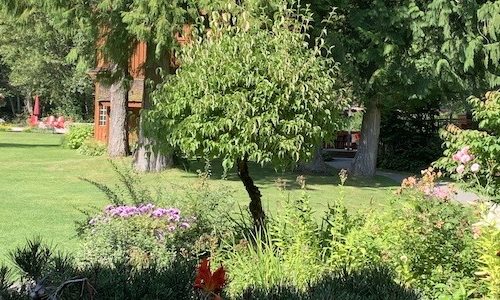 2020 has been a year like no other, and it seems the disruption will continue ...

In my earlier post I reprised my earlier work on the role of informal networks ...