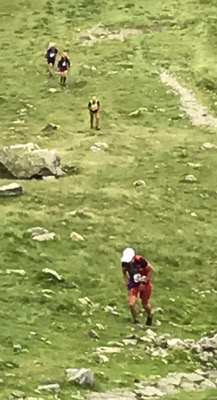 Its been over fifty years since I did my first mountain navigation training in the Lledr Valley. There were about twelve of us ranging from slightly awkward pre-teens (that includes me) and a few boisterous teenagers. It was my second solo holiday; the first had started from Llangollen on the day England won the World Cup at Wembly and threaded its way between Youth Hostels over a week to Harlech by way of Bala and Dolgellau. To give you an idea of the period; we’d had to make a special trip to Cardiff to buy me boots (the ubiquitous presence of the outdoor shop was a decade or more away). I spent weeks soaking my feet on potassium permanganate solution and wiped them daily with surgical spirit to toughen them up. New boots themselves took months to break in those days. Either way I enjoyed it despite being the youngest by two years which conceded me to walking with the guide most days. So the next year it was a course to qualify me to solo on Youth Hostel based weeks and weekends in Snowdonia; something my parents allowed me to do from the age of fourteen, for which I will be eternally grateful.

I still remember the pain of learning the hard way to trust the compass not my instinct. Half way through the week, over confident and looking forward to the wild camp planned for Llyn Bochlwyd the next day we set off to navigate between fixed points south of the Lledr Valley. We did well until the instruction gave us a map bearing that would take us to a fire break in the forest which we were to follow does to Dolwyddelan. Standing on the hill which was our last check point we could see the firebreak clearly (or so we thought) and set iff over the heather with the confidence of youth. Half way across we saw a tent with out instructors just off our path way offering freely brewed tea so we diverted. Sitting with them drinking tea they told us they were on the compass bearing, so they couldn’t have been fairer, but we choose to ignore them which was not just youthful arrogance, it was also a degree of anger and irritation. On the first night we had, shall we say, been over excited and had kept most people up i the Youth Hostel well beyond the designated lights out of 2200, Youth Hostels had a strict regime in those days. The result was that we had been taken on a particularly punishing training walk with full packs the previous day until we were exhausted and unable to do anything but crawl into bunk beds exhausted that night. But back to the story …

An hour later we were hacking our way through undergrowth surrounded by insects in intense heat and lost two hours on the time. Sneaking into the final checkpoint contrite, a lessons learnt. Next time, take a bearing, trust the compass. The other lessons involved taking a series of short bearings in the mist and walking to a fixed point before repeating the process. On today’s walk I didn’t need to do that despite low visibility. I climbed in clear weather up to Red Pike but cloud and hail greeted me at the top. Thanking my normal paranoia for always carrying extra gear I added sheltered to don fleece and waterproof and chatted with a couple who were obviously settling in for some hours. I turned out they were marshals for a fell run that day and told me that I would shortly encounter over 60 of said fell runners as I followed the Ridge to Haystacks. Life then became easy I just headed for the next fell runner until I dropped out of the cloud just after High Stile. The first was super fit and looked like he had only just stated. The last I met descending to the Scarth Gap with all sorts and types in-between. As I walked through the field they became more exhausted fell walkers, or staggerers but I’m still impressed. The ascent to Seat is punishing and when I mentioned they were on their final significant ascent those able to talk told me they still had to make Mellbreak. The veterans were especially impressive.

So to my walk for which I started late having watched the Lions match the previous day. My original plan had been a complete round of Buttermere but with the late start I had to choose one side or the other. On a previous occasion I done the round from Robinson via Dale Head and Haystacks before taking the Scarth Gap pass back to Buttermere, this time I started the other way round. All in all a delight but I have reached the age where going up is less painful on the knees that going down. So the descent from Seat and the final descent from Fleetwith Pike were very slow affairs. With a six day mule train assisted trek in the Accursed Mountains of Albania coming up in a few weeks time I can’t risk injury. On reflection it would not have taken me much longer to do the full circuit as following a fairly gentle ascent from the Honister Path the route to Robinson is a high level ridge with good walking and the descent a zig path that could have been done at greater speed. But pubs stop serving food at 2100 and the need to eat was also a driver.

My main reflection was that I need to spend more time here. While at Lancaster I was more involved in politics and religion that in fell walking. Although we did have a rather tense annual shared house party with the Evangelical Christian Union at the Butterworth Youth Hostel. I was Chairman of the more political and ecumenical wing of the Chaplaincy Centre. Debates on the legitimate sources if revelation, the value of purgatory (why shouldn’t people get a second chance) and the role of the Church in Politics were lively issues back in the 70s. I also remember those events for the Buttermere valley however. Either way most of my walking was in Wales with the odd trip north. So the Lakes still have many peaks and even more routes that I have not undertaken. So a few more long weekends are called for. More photos when I get home Monday night, but it was a good day and justified the sirloin steak and lakeland ice-cream in the pub at Buttermere at the end of the walk. This is one of the great joys of the Lake District, there is always a pub at the end of any walk, and they are good pubs with good bear and a healthy welcome for walkers.

Having posted on expertise yesterday I found myself thinking about the issue in the course ...

Way back in my DataSciences days before the IBM takeover I worked on a new ...