Navigating under conditions of uncertainty 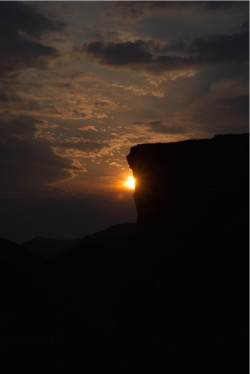 The current trip to South Africa is pretty frantic. Traffic issues mean early starts and late finishes and we are also packing in a lot of meetings, presentations and conversations. But the advantage of having two weekends has been the opportunity to see more of the company. Last weekend we had a day in Stellenbosch (20 bottles of wine shipped home) and a great day with the faculty of the Complexity Centre at the University down on the Cape Coast. This weekend we were in Golden Gate with a full day today to explore the hills. It meant I had a chance to head into the hills both before breakfast (to catch the sunrise from Brandwag Butress) and then a more extended walk to Wodehouse peak. Given that I have another four day section on the Welsh Coastal Path (Tenby to Dale) when I get home in a weeks time it was also a chance to stay fit.

The dawn trip gave me a false level of confidence about trail marking in the park as navigation was easy and the path clear. The trail map was, shall we say, minimalist but it looked like a longer walk would be no problem. Not a very long walk mind you, around 4 hours, six miles and a couple of thousand feet so I strapped on the camera and lens (carrying four) and a litre of water and set off. The initial route repeated the morning climb. Just before the final scramble I came across Sonja and Wessel who were on their way down and we stopped to chat. They were planning a bit of sightseeing not sharing my obsession with mountain walking. A couple with one the wife’s elderly mother arrived on the ledge with us and after a short halt the mother promptly collapsed. It took about four minutes to recover and as we had mobiles and reception we phoned for help. I really couldn’t do more and there were more than enough people to help who were heading down, so I carried on. It later transpired that now one came out to help, but she recovered enough to be helped down. So that was a warning about expectations for mountain rescue!

I now discovered that the signposting on the track was not as clear as I thought. I should have headed down and followed the track along the valley floor but the signpost seemed to indicate that I carried on along the contour line which I did. At this point you may want to link to the map of the journey to see the path. The path started out well, then deteriorated rapidly and I ended up following the contour line on a very steep slope with tall grass, shrubs and hidden rock. After some time I could see the track and my earlier error but my that time I was being stubborn so I carried on until I found the track again. After that it was an easy climb and then a glorious ridge walk with views to the distance Drakensberg mountains (a future trip) as well as eagles, vultures, wildebeest and buck. Reaching the end of the ridge I chose to extend the trip by heading for the final peak. Rough going and a difficult scramble but well worth it and then returned to the main track.

By that time the other walkers had all headed down the very obvious track back to the camp, but the track was clear and I set off down reaching a cairn at the top of Mushroom Rock. Now the real problem hit. There was no indication of the route off and with a concave slope I couldn’t see the path ahead. As you will see (if you have opened the map) I did a long loop to the right, then one to the left both without finding it. I then had a choice. I could continue trying to find the route, or I could retrace the path. Discretion should always be the better part of valour on strange ground and I just had time to make it before sunset so I partially retraced the route. That involved climbing right back up to the summit, reversing around half of the ridge and then making an alternative and very steep exit. I later checked the planned route from the road and going up it would be have been obvious, but the downwards options were hazardous so I think I did the right thing.

My major problem was lack of water as I had expected to be finished in twenty minutes and I now had another three hours in heat, but I made it back just before the shop shut for which I was grateful. Three pints of milk and two packets of peanuts later I was restored to health. But on the plus side I got the sunset picture that opens this blog, and a longer and more challenging walk. That picture was itself a lucky shot. I was moving at pace over the last half mile as I didn’t know when the shop shut. 1700 and I was doomed, 1730 I might just be OK and I had fantasied about milk for the last two hours. Luckily I happened to look to the side and decided the shot(s) deserved an additional few minutes regardless of risk of loss of dairy refreshment.

A fascinating piece of serendipity was the discovery that the couple whose mother had fainted early were in the next hut to us. They came round the thank us and it turned out that the wife was an epidemiologist and had worked in Fort Collins with some of the same people I had worked with the US Veterinary Service some years ago. So we had a lot of the same interests and conversation went on into the evening, fuelled by wine, this is South Africa after all.

Photographs from both the pre-dawn and the whole day walk

I wrote my first post Towards a new theory of change some weeks ago, but ...

The door is not always open

I was reminded of the Daoist quote of the title while reading Embracing Complexity over ...