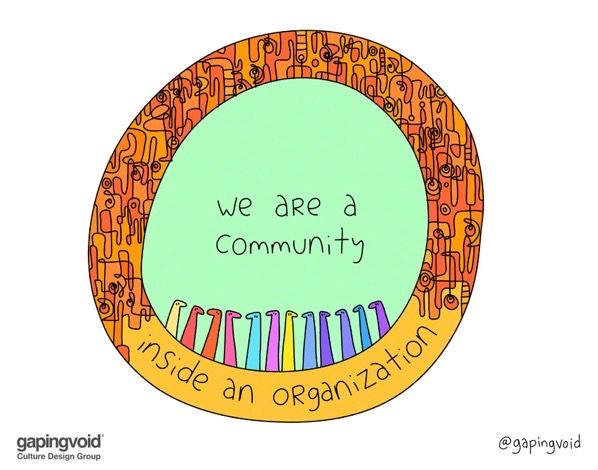 A mycorrhiza is a symbiosis between a fungus and a green plant. The plant captures and transmits the energy of the sun to the fungus which reciprocates with water and various nutrients.  The mycorrhiza entangles itself in the plant’s root system either internally or externally to the sells and the association may be mutualistic or in some circumstances parasitic.  As regular readers of this blog will know I use the idea of symbiosis a lot and have been for years.  When I was first a business manager in Datasolve days I presented my three business areas as symbiotic systems using a picture of a mushroom at the annual management conference.  In those days they were luxurious affairs involving trips on the Orient Express and complete sets of Waterford crystal for those of us who hit our targets; those days are now well past.  It was the time when if you had a computer and some programmers you could mint money – we charted coders out on the MIPS they used so the poorer the programmer the more the client got charged.   It was a time of plenty and the industry sooner or later hit the commoditisation barrier and those times ended.   A lesson in there for the Agile community by the way who are just coming out of a period of abundance and are in too many cases ill-equipped in management style or experience to handle what is coming.

I never lived down that presentation.  It was my first as a General Manager and I overdid the science and the academic content.  The syllable count per word was about twice what it should have been.   Some years later when I had just launched the new Genus Programme in my strategy role I was introduced by the guy who had taken over my management role as the “Thinking woman’s thinking person”.  You probably have to be British and of a certain age to get that but it was a reference to Frank Muir’s designation of Joan Blakewell as “the thinking man’s crumpet”; a highly sexist designation but she refused to denounce him saying he was “such a sweetheart, he would have dissolved in shame”.  It threw me completely (as was the intention) and I ended up getting in a highly confused set of too long sentences involving the French method for legacy system management, objection orientation and rapid application development which caused much hilarity and I still remember with shame.   To any people wanting to get on the keynote circuit a few significant humiliations is an essential first step!

To get to the point, before a hasty shower and a 0618 train to join Simon Wardley’s Map Camp in London today.   I have been using the idea of a mycorrhiza in a few presentations lately to talk about the need to manage the informal networks in an organisation.   As it happens my first major article using Cynefin in something like its modern form addressed the necessity of a healthy informal network within an organisation.  I had just completed some work which showed that the formal-informal ration in IBM was 1:64 and that was just those who used Lotus workrooms so the real ratio was almost certainly far greater.   IBM’s Chief Knowledge Officer at the time got slightly irate at this and demanded I come up with a method to make the informal formal.   The point I made was that if we ever did that (and we could not have) we would destroy the system that supplied nutrients to the more visible plants that she knew about.   It was one of those key turning points in one’s thinking and I replied that for the management was control not necessarily nurture; for me, in context, it was both.   That started a whole theme of managing the ecosystem so that while it wasn’t visible per se, you could measure and enhance the informal networks within an organisation and better connect their knowledge generative power to the formal system.   That resulted in a set of methods and tools designed to manage in the shadow side of an organisation.  Something that was, and still largely is, anathema to those responsible for Organisational Design.  As I moved into complexity work that became more and more vital.

A key aspect of this management is a recognition of the essential entanglement of multi-faceted lives that we all live both within, without and through the organisations of which we are a part.  Juarrero’s famous designation of a complex system as “like a bramble bush in a thicket” illustrates this well.  In modern organisation design managing the informal is an if not more important than managing the formal.  It is a messy process and one that also involves managing transitions between the two.   It is more than I can handle in a single post so I plan to develop the idea this week, including making explicit some of the new methods I have been working on as well as revisiting that 2002 article that established Cynefin in a wider market.

Banner image by Hans Braxmeier from Pixabay, in text image from the incomparable pens @gapingvoid

I’ve been meaning to write about the “forest cycle” or the supposed necessity of chaos ...

In 2002 I published Complex Acts of Knowing, the first major article to include Cynefin in ...