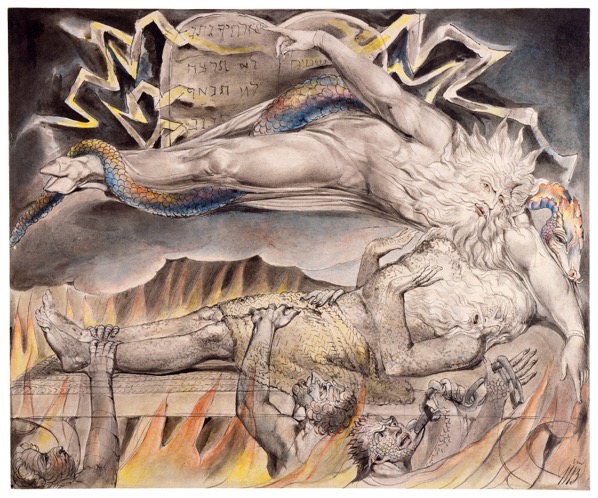 One of the few good news items yesterday (don’t ask but it involves more tests) was my discovery that we have a major exhibition of the work of William Blake in London over the Christmas period, which means I can make it and daughter is also interested which is a bonus.  I’m not sure if it will include the Job sequence (from which the illustration here is drawn) and of course he never finished his work on Dante’s Inferno although what remains is amongst his finest work.   To me, he exemplifies the Romantic period, for his painting and his poetry.

I first came across him at University where I attended my first SCM GA at a retreat Centre somewhere near Drogheda in Ireland.  Movement, the SCM Journal has just published a special edition on Blake with the Irish Secretary as guest editor and we talked about religion and politics through the lens of his pictures and writing.  Black has a unique ability to demonstrate ambiguity as a means to gain meaning.  This painting of Job’s dream shows God as tempter with cloven hoofs and an entwined serpents.  His famous painting of Newton shows the scientist in a religious form and so on.   My post a couple of days ago on aesthetics  should probably have referenced this.  To returnk to the three aspects of that post; Blake is wonderfully, gloriously sensory in his painting and language, he reimagines by providing new perspectives and insights and through that creates an ability to gain meaning.  Black is engaged with the world through abstraction not removed from it.

That first encounter was also memorable for a pilgrimage walk through New Grange and (I think) my first meeting with Mary Condren .  There was also a slightly confrontational Well if you want us to go to the Battle of the Boyne  site then how about popping over to see the head of the (then he is now a Saint) Blessed Oliver Plunkett’s head between Protestant and Catholic members of the group.  For those not familiar with the politics, the Battle of the Boyne is an iconic event for the Unionist community, while Plunkett was set up in the 17C Popish plot and was the last Catholic Martyr to be hung, drawn and quartered at Tyburn.  This was the late 1974 from memory, maybe 1973 so the height of The Troubles with Bloody Sunday a recent memory and the start of internment.   These were serious matters and serious times and for many from the ‘mainland’, it was a first encounter with the realities of sectarianism.   That whole period left scars on all of us, even those of us tangential to the process and remains a motivation behind my hostility to superficial approaches to peace and reconciliation that has spilt over into my frequent attacks on the use of pious platitudes in organisational change initiatives.  I’d like to recount the use of Blake in our own conversations late into the evenings of the GA, but it was also my first encounter with Black Bush.  So I know the discussion took place, I know it was insightful but my memories are blurred and probably best so!

Returning to Blake, Hugh of Gaping Void brilliantly illustrated what is probably Blake’s best known poem and I made a present of the limited edition print they produced to my daughter and it has travelled with her through multiple lodges.   To save you looking it up, I’ll conclude with the full text.

Tyger Tyger, burning bright,
In the forests of the night;
What immortal hand or eye,
Could frame thy fearful symmetry?

In what distant deeps or skies,
Burnt the fire of thine eyes?
On what wings dare he aspire?
What the hand, dare seize the fire?

And what shoulder, & what art,
Could twist the sinews of thy heart?
And when thy heart began to beat,
What dread hand? & what dread feet?

What the hammer? what the chain,
In what furnace was thy brain?
What the anvil? what dread grasp,
Dare its deadly terrors clasp!

When the stars threw down their spears
And water’d heaven with their tears:
Did he smile his work to see?
Did he who made the Lamb make thee?

Tyger Tyger burning bright,
In the forests of the night:
What immortal hand or eye,
Dare frame thy fearful symmetry?

One of the points made in our recent retreat on decision making is that the ...