Last year I decided I had reached an end, for the moment, of New Year Parties.  There was a time, when we had children at school and I was active in the Cricket Team, that attendance at the designated party was a requirement for social engagement within the village.   However small communities rarely sustain themselves as children grow up and move on, and there is little diversity to allow new groups to emerge.  It's one regret of not being in a big city.  Also if you travel a lot your social circles are more diverse, less concentrated in geographical terms.  So the people you would enjoy spending New Year's celebrations with are spread over too many time zones to make any gathering practical.

My alternative last year was to take myself off to South Wales and then go for a long walk on New Year's Day taking an advantage of being sober, to start at first light thus extending the available time.   The Treleddyn Round worked well for me to start 2012 so I resolved to repeat the experience in a different locationt o open 2013.   The 30th and the 31st had seen me with daughter playing tourist in Warsaw.  I needed to get 1,256 miles in to retain Executive Platinum status on American Airlines and Warsaw was the best option.  I thought I would need to take her back to Brighton on the 31st so I resolved my New Year's Day walk would pick up the South Down's Way with the section form Amberley to Cocking..  To make this easy I booked myself into a Travel Lodge for the night and resolved to start at dawn.

As things worked out daughter went onto London so I got there earlier and went to sleep around ten.  Waking up in the early hours of morning I used the iPhone to double check public transport from Cocking to Amberly.  My plan was to leave the car at the station and then return via bus and train from Cocking at the end of the walk.  It was a good job I did as the web site now contained a “No buses on New Year's Day” notice that had not been there a few weeks before.  I had assumed a Sunday timetable.   Now this was difficult.  One possibility was to walk from Cocking to Chichester, another to cut down earlier from the route.  None of these was attractive as walking along the open road at dusk is hazardous and lacks any obvious attraction. 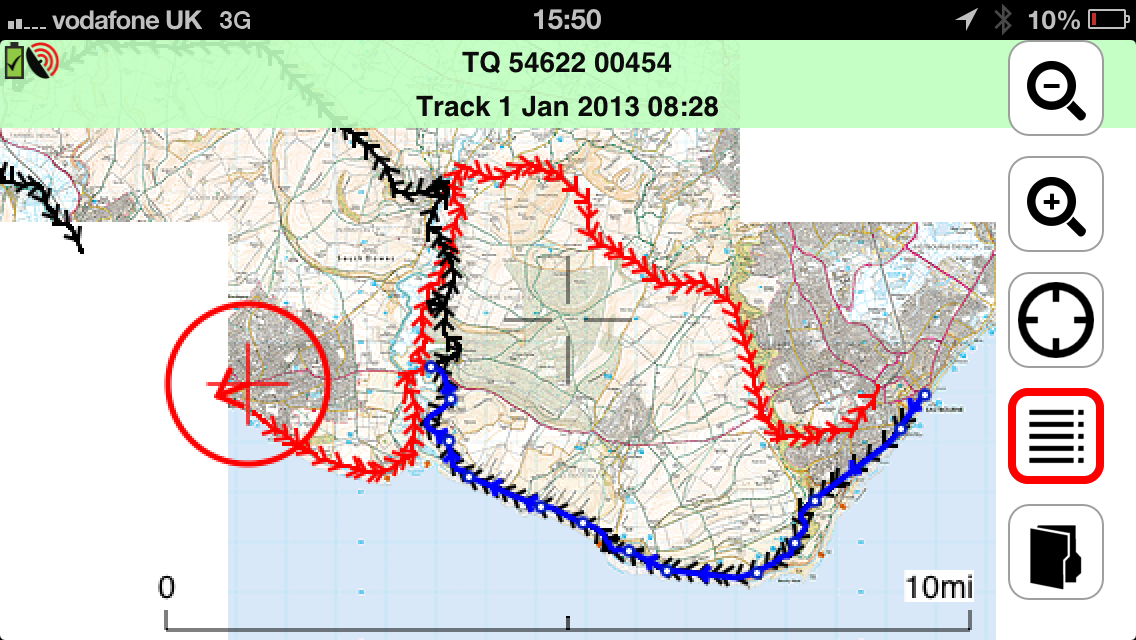 I then remembered that the South Downs Way has two different legs from Eastbourne to Alfriston.  One I had done, via the Seven Sisters ,the other remained incomplete.  I had planned to do it as part of a long 25 mile circular walk in summer as the section itself is only 7.5 miles. Then I remembered that looking across Cuckmere Haven I had regretted that the estuary did not allow Seaford  head to be a part of the main walk.   Given there were stations at Seaford and Eastbourne with trains running I had my route sorted.  So I got up and parked on the sea front as the sun came up over the Martello Tower.  The route is shown in red on the map.  The alternative route (walked about a year ago) in Blue and Black shows other sections of the South Down's Way.  All courtesy of ViewRanger for which my thanks to Euan, its now an indispensable app. 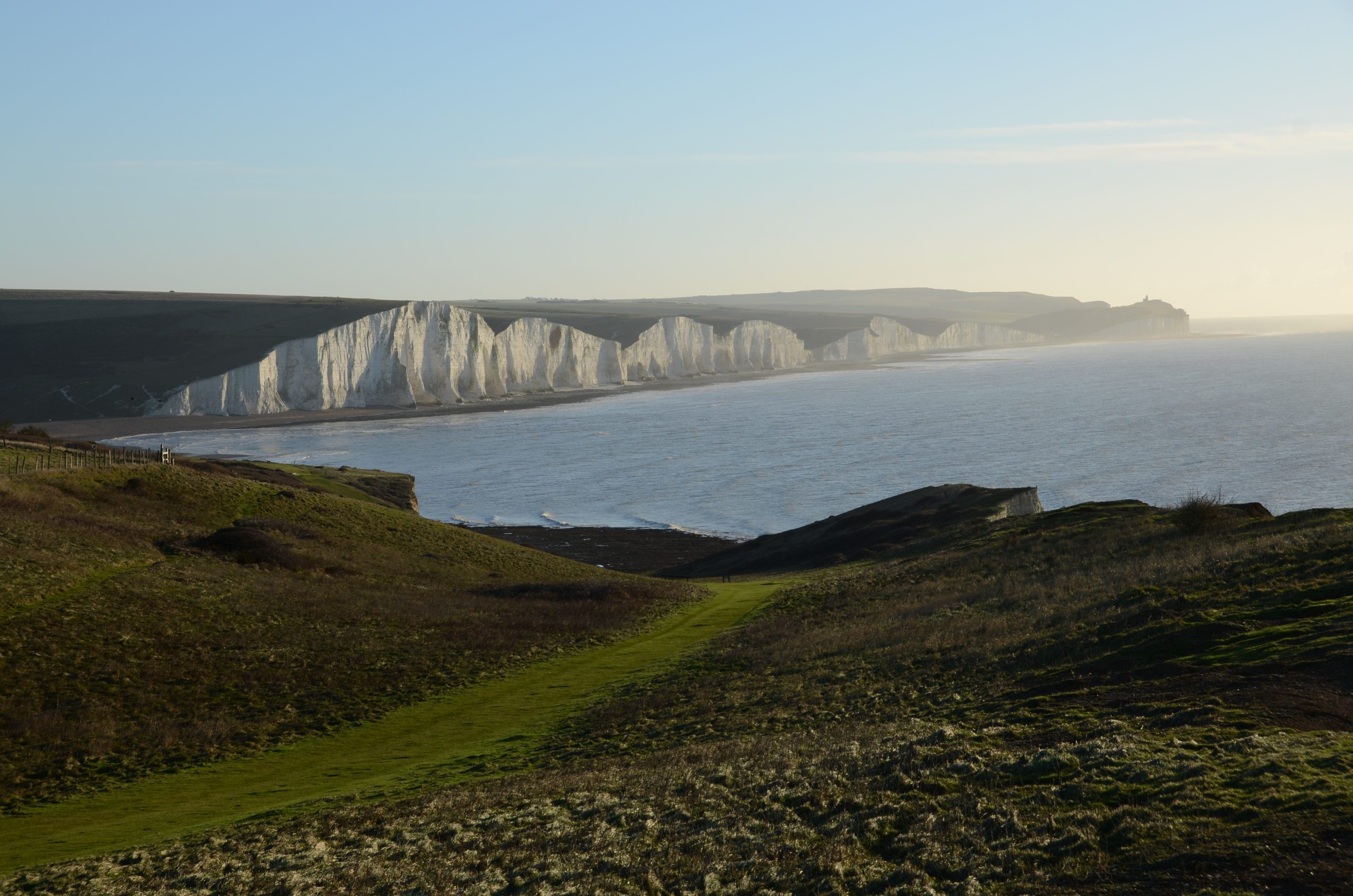 It was cold, but there was not a cloud in the sky.  I walked easily up to the top of the cliffs (those trekking poles remain a wonder) taking a fair number of pictures with the low dawning summer sun.  The walk along the top of the cliffs was a delight with wonderful views over the Seven Sisters (see right).  I dropped down to the old customs cottages at the mouth of Cuckmere Haven in good time.  I looked across the river to where many years ago I had twisted my ankle and had to make it worse by allowing a 7 year old daughter to play nurse by propping me up on the walk back to the car. It was painful at the time but its a good memory!

I planned to follow the raised banks on the side of the river and this started well.  However it proved increasingly difficult as mud dominated.  If it hadn't been for the trekking poles and the realisation that I had to slow my pace I, and the camera, would have fallen flat into the mud to our mutual peril.  So when I finally made the Golden Galleon Pub at Exceat I resolved to take the small road to Alfriston rather continue the peril.  Given the riverside path was flooded upstream this was a good choice.

The one downside, and I am still seething with anger a day later, was that the road had lots of puddles and I encountered a red sports car.   I suppose that driving a red sports car by definition raises questions as to intelligence and altruism but I had not expected to be soaked to the skin by said car ploughing through said puddles at 40mph.  I thought I had protected the camera but discovered later some moisture had got onto the sensor so that's going to cost for cleaning.  I threw a trekking pole at the car as a javelin, which obviously fell short but gave satisfaction.  I am still angry enough that I may haunt the villages of that valley in order to hunt down red cars and apply the sharpened end of the trekking pole to the evil machine.  It was all made worst by the fact that the next three miles were in the shade so I also got very cold.  Given my Christmas blog posts on children's stories I was reminded immediately of Mr Toad. 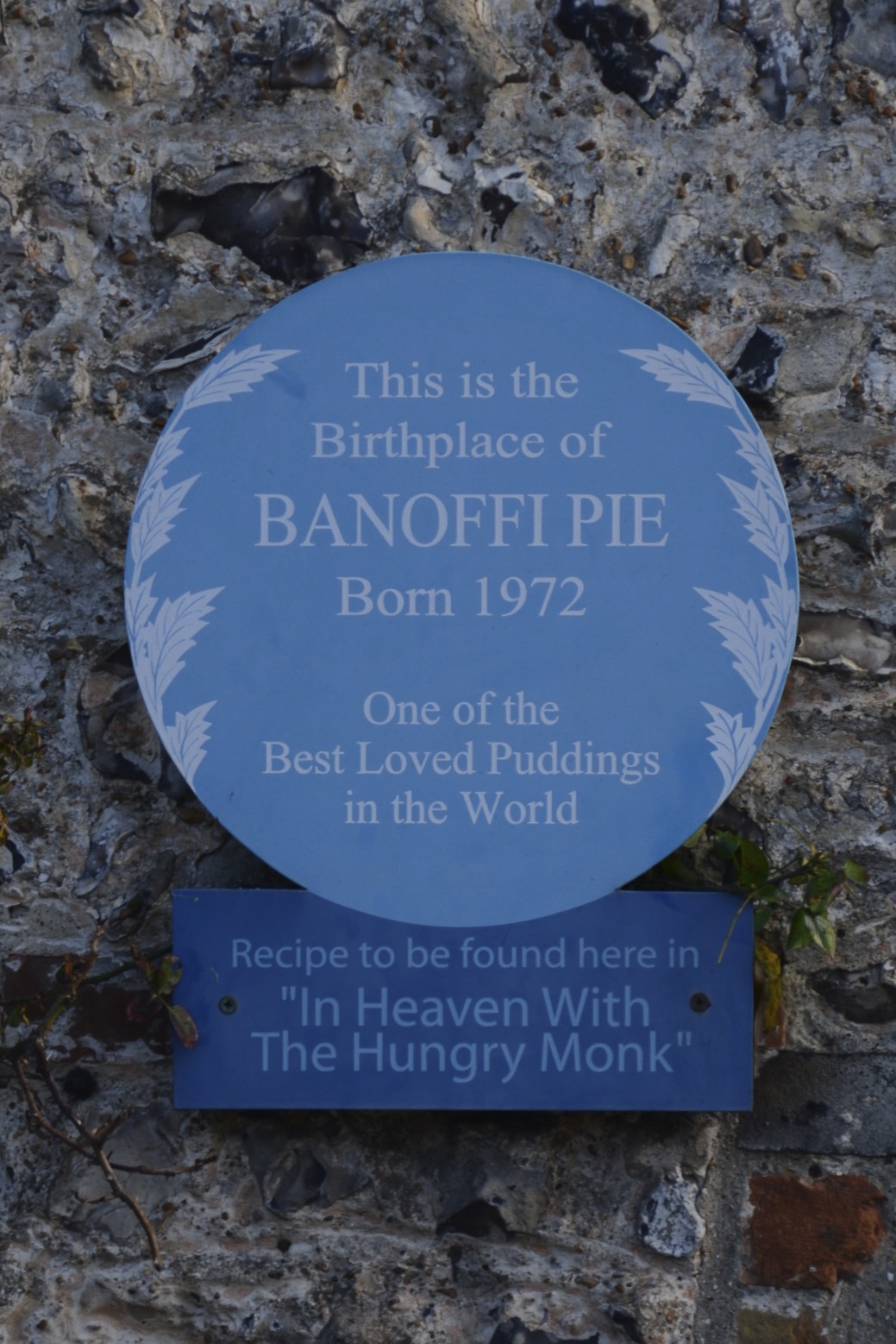 My spirits were somewhat restored by the time I took this picture of a heron at Alfriston and shortly after I turn up the track that leads onto the Downs with a wonderful view westwards along the downs shown in the opening photograph.  The path happily followed the summit before dropping down into the village of Jevington.  This unassuming horsy village boasts that it is the origin of Banoffi Pie and is a fairly typical Sussex village.

The climb from it to the crest above the Long Man of Wilmington.   You can't really get the full effect of this ancient hill carving from the path but I remain curious as to wether the worthy victorians who restored it removed any sexual imagery.  From here to Eastbourne the path was a wonderfully airy walk around the plateau with views in all directions and little up and down.  Easy walking so one can stride out and think which is always good.  As Eastbourne approached the number of walkers, both with and without dogs, increased.  The sight of a bus meant that I knew I had a short route back.  The Brighton and Hove service obviously having a more customer centric attitude than StageCoach.   I left he plateau with reluctance, confirmed in my intent to make this a long summer walk completing over Beachy Head and the Severn Sisters.

Eastbourne is winter is somewhat decayed, like most seaside resorts.   Its a mixture of what were originally country houses (mainly flint) now subject to infill of 60s and 70s houses.    A former school gate commemorating  the 15 pupils who lost their lives WWI now opens onto an architecturally unimaginative housing estate making one question the sacrifice.  The clock tower of the Municipal Offices adds some relief before the barbarity of the Arndale Centre reminds you just how bad design can be without imagination.  But I could buy milk and a sandwich there  which were much needed.  It was my first food since the previous night, other than two energy bars. The bus duly took be back and with the sun now beneath the horizon it was a very cold walk back from the high street to the sea front and my car.   I should have booked a second night though, the three hour drive home was hazardous as I was tired.

Also that is two new year's day walks that have ended up by the sea, having originally planned something different.  So this is fate and a tradition is established by two events; next year maybe Northumberland or two/three days on the South West Coastal Path.