Mind your P’s and W’s

I KEEP six honest serving-men
(They taught me all I knew);
Their names are What and Why and When
And How and Where and Who

Kipling, from The Elephant's Child

Of all the Just So Stories the Kolokolo Bird's injunction to “Go to the banks of the great grey-green, greasy Limpopo River, all set about with fever-trees, and find out”  as a means of discovering what the crocodile has for lunch has been one of my all time favourites; both as a child, and then as an adult reading to children.  For those unfamiliar with the story of How the Elephant Got its Trunk the basic plot involves a act of pragmatic discovery, a heroic rescue by the Bi-Coloured-Python-Rock-Snake and considerable amounts of spanking. 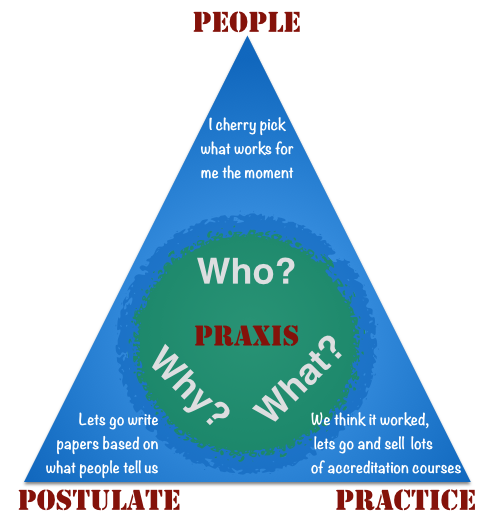 I was reminded of it when I put the triangle pictured in a moment of frustration earlier today.  I'd just un-followed and blocked someone on twitter following on the grounds that conversation with someone who can only engage using ad hominem arguments eventually ends up with you dragging yourself down to their level.  First time I've actually blocked someone and from the direct messages I was not the first to do so on this exchange.  I know they can still see what you post but it makes a point. After three extended threads with no progress time to call it a day.  The negative exchange had started with my earlier criticism of SAFe as the infantilism of management.  The individual concerned was offering training in the subject and took things a little personally. When you can't say anything about a subject without a respondent taking high umbrage and responding with quite nasty invective little progress can be made, especially when they seem to have no awareness of the language they are using.  Maybe face to face it might be different but not in a twitter stream.

Now you don't need to understand the whole controversy around SAFe from the Agile community to get the point of this post.  I have some future posts planned on SAFe and the approach to scaling it typifies.  This post, while it is relevant to that argument, stands aside from the debate as it is making a generic series of comments about the way in which methods and tools are both created and more critically how they scale.

So to the triad pictured.  It looks at three aspects of developing and scaling methods.  Those are:

Now properly understood praxis is about all three, combining theory with practice to create sustainable and resilient solutions.  The problem is that people usually focus on one, maybe two and rarely three.  So lets look at three negative approaches that take a single perspective.  These are all too common and I face them on a daily basis (or so it seems).

Now all of these in isolation worry me.  Combinations of two worry me less, but overall all three need to be present to scale properly.   I'll continue with that tomorrow.

One of the common social media comments post a Cognitive Edge course (especially when I ...

Gravity is not the same as gravitas

Ye pushed them raw to the battle as ye picked them raw from the street. And ...