On the 11th of March this year I sat down for a meal at the Bridge Inn in Ratho (top picture) near Edinburgh with Martin and Lucy Burns along with Simon Wardley (see picture below).  It was the end of an enjoyable three days.  Wales had beaten Scotland (just) to stay on course for the Grand Slam and I was there. Earlier that day Simon and I, along with others, had spoke at Lean Agile Scotland in the RBS conference centre and Lucy had been doing her usual highly efficient job of making everything work for the event. The conversation was far ranging and covered everything from the hypocrisy of senior management to the politics of Brexit and many other subjects besides.  As usual when Martin and I got together we referenced our common amusement at the too many members of the Agile community who assumed that because we disagreed on a range of subjects we were not friends.  A few people, especially those who shared our cultural and educational background, realised that we enjoyed the argument and held in each other in mutual and high respect.  it has always been the case in my family that if we are polite to you then we are not yet sure of you; if we like you then we argue.  Martin came from a similar tradition.  I doubt we would ever have agreed on SAFe, or even on the grounds on which the debate should be held, but we both enjoyed the exchanges.  On the general issue of treating people has human beings and challenging the abuse of power we were as one.

I remember one exchange in particular.  On the 1st August 2017 I was involved in one of the five most tedious days of my Round and Through Wales Walk.  It was day 48 and involved seventeen and a half tedious miles, largely on hard surfaces, between Trevor and Caernafon.  I was terminally bored, but it had to be done and twitter became a means of distraction.  Never hesitant Martin happily came out to play and we whiled away an hour or two rehearsing old arguments, creating some new.  I can still picture the gate I walked through when he hit me with a response that caused me to stop, read it twice, and mutter bugger he’s got me there.   About 15 minutes later I thought of a response and almost got run over by a truck on the A499 in consequence but by then it was too late. 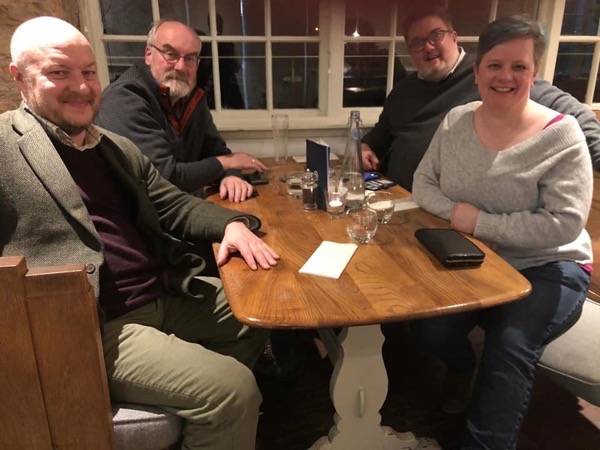 Martin was one of those rare, indeed very rare, individuals who could not be intimidated, but stood his ground while never taking anything personally (or if he did I never found out).   Integrity makes that sort of thing possible and Martin had it in spades.  Not for him the bland desire for consensus that is too common in many business circles, but especially so in Agile.  The nonsensical idea you just have to be nice about everything was not for Martin or I and we both knew the value of dissent for learning and development.   For the communities he supported be was invaluable and, to continue a debate where I really want him to respond, he was one of those people who made even bad methods work because he cared about people and he cared about outcomes that valued people.  He knew how to compromise, how to adapt, how to achieve results.

When I learnt this morning that he had died unexpectedly last night I couldn’t really believe it.  Several of us are already working on some form of tribute – possible a combined masterclass or conferences and a bursary in his name – but all ideas are welcome.  I just hope he’s giving St Peter the same treatment he gave me and others over the years; I loved him for his lack of respect, his ability to stand up for what be believed in.  His is a great loss to the Agile community and more; my heart goes out to Lucy and his family.

I’m starting to think that it is only a matter of time before I graduate ...

This week CE hosted an open webinar on the topic of Cynefin & Theory of Constraints.  This ...