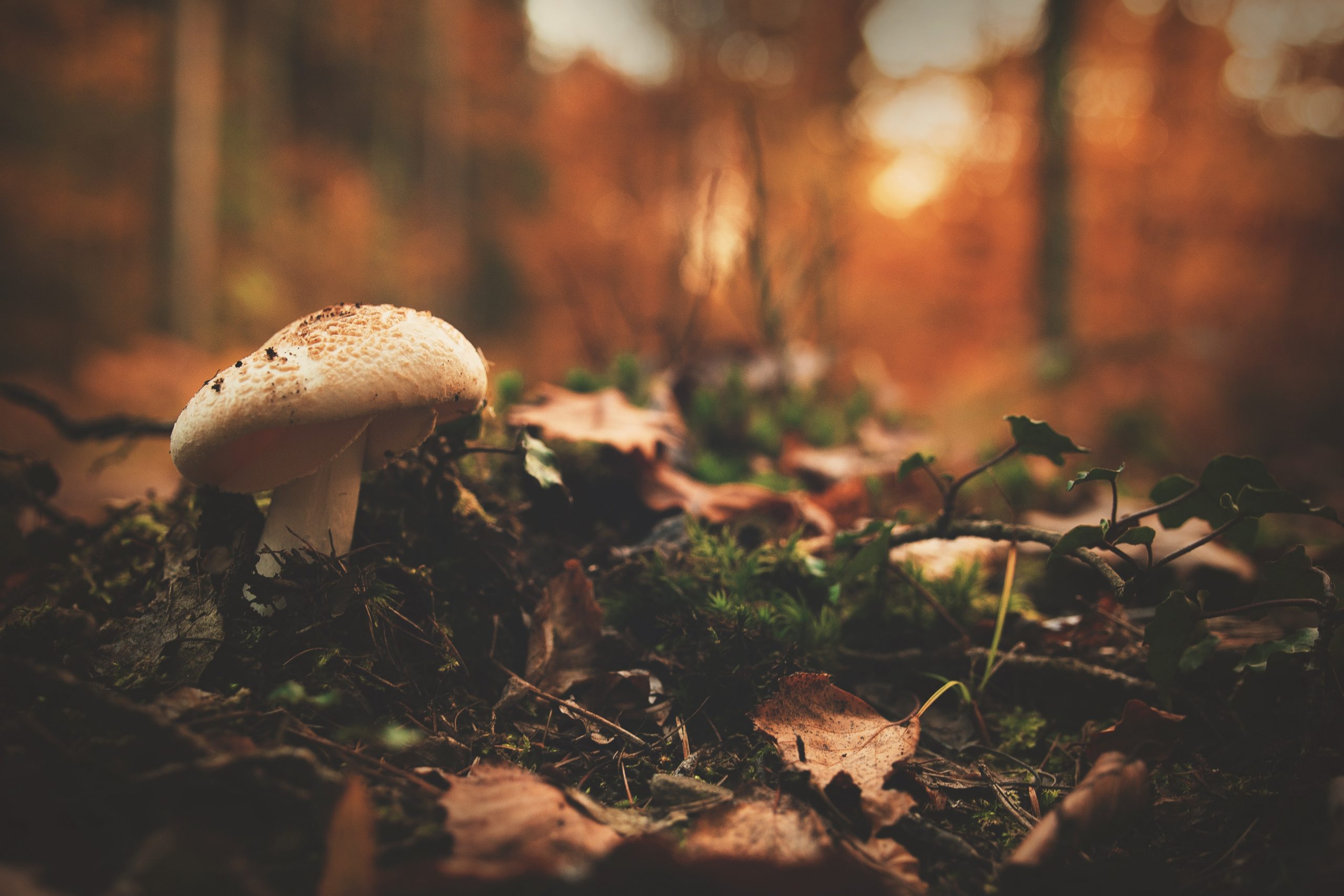 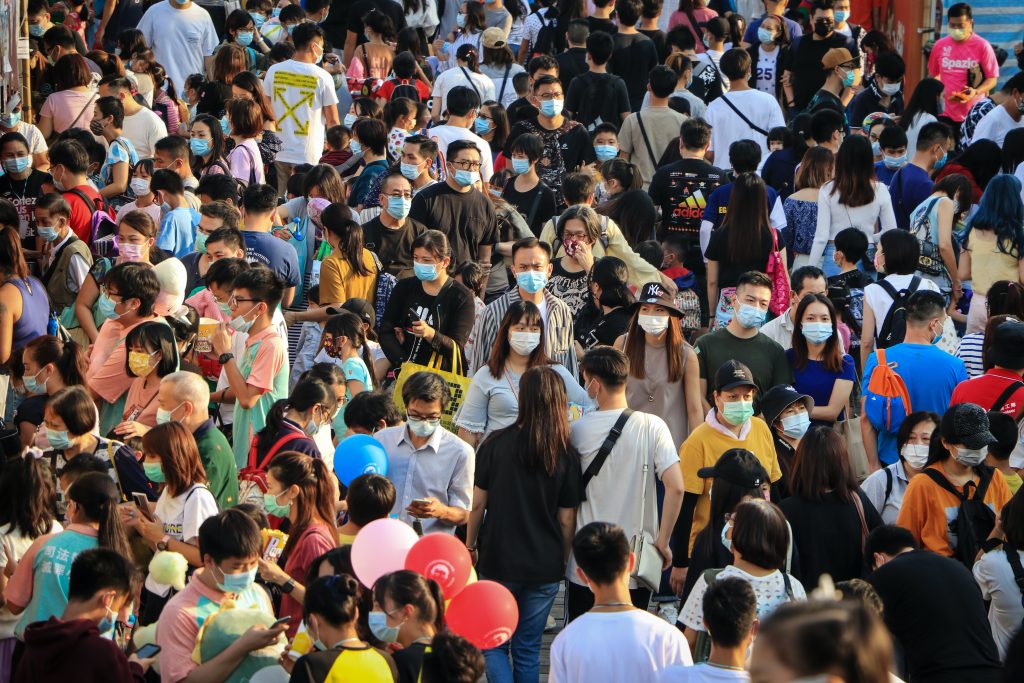 Picking up right where we left things, let’s dive straight into more of the patterns. It is a commonly-accepted stereotype that those of us with access to social media distractions spent most of the pandemic doomscrolling. There might be an element of truth to that (I know that I downloaded two new social media platforms within the last year). Still, when it came to knowledge or awareness, we see that media, social or traditional, was not the primary source in participants’ stories. Instead, there has been movement towards the central space of combining multiple sources of knowledge and tempering what comes through social media with expertise. 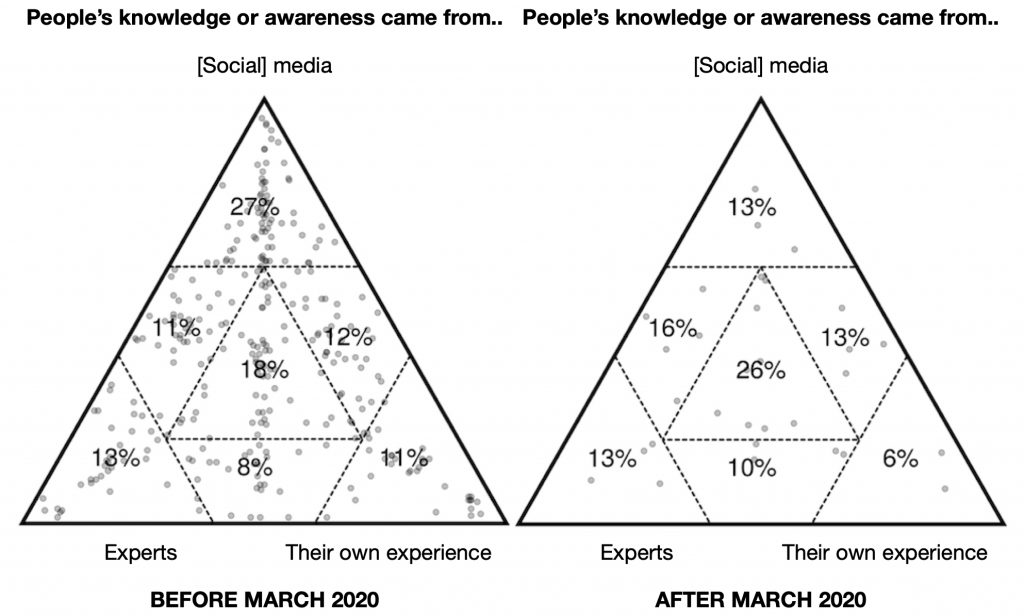 This example shared shows how the pandemic gave people the motivation to connect and distribute information differently:

Pivot Projects, a collaboration of about 200 people from around the world, aims to use a diverse set of points of view, all of the information available on the Internet, modeling of the important human and natural systems of the world, and interactions with AI to help people in cities and communities make plans or take actions to make themselves more sustainable and resilient.

The positioning of the stories in relation to time also changed: 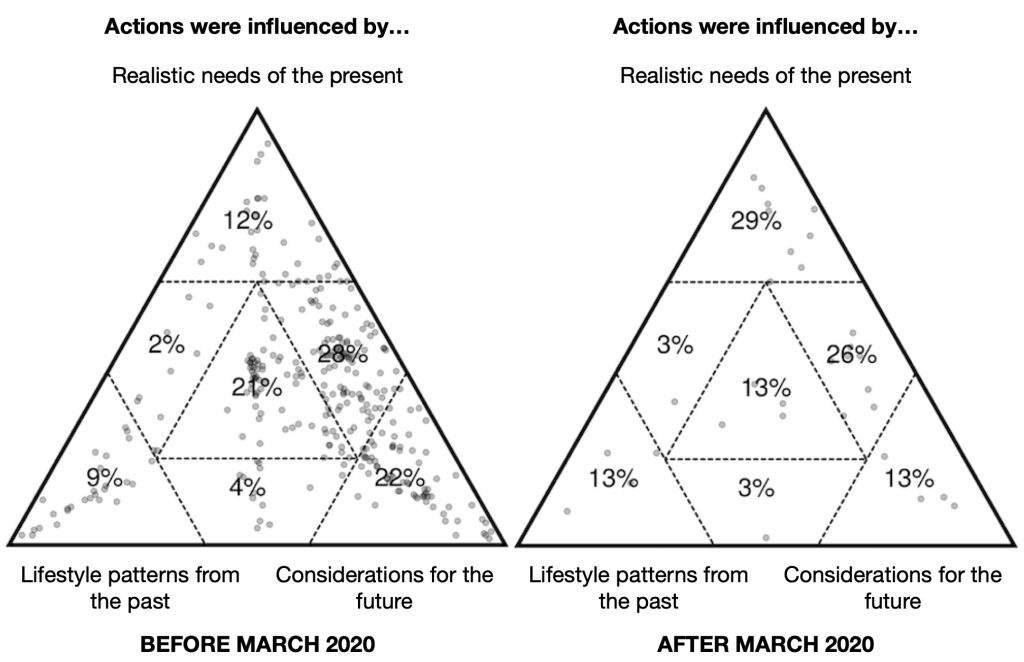 Before March, the future was a very powerful attractor and most stories tried to balance the needs of the present with considering the future. After March, the pattern shifts towards the top of the triad. It appears as though the literal survival pressures generated by the pandemic prompted people to focus on the present and its needs more than they did before. However, there is still a relatively large cluster of stories in the area between past and present. So before COVID there is an attempt to balance present and future when we think about environmental sustainability, but the addition of an immediate sense of urgency shifts the emphasis from the future to the present.

Stories in that present-focused area show that this urgency can be considered an opportunity to connect with needs that might be closer than we had previously assumed. The present doesn’t manifest in the sense of “Focus on what we need and we will worry about the climate later”, but more like “what we thought was in the future is actually in the present and we really need to pay attention”.

The Covid crisis is putting many countries to a halt, it could be an opportunity for people to connect to the wider challenge of climate change and biodersity…. as well as for leaders to choose to direct the money towards really sustainable economies. This is what I hear in the interview of President Macron for FT on April 16th 2020.

I remember just seeing on news about the permafrost melt in Norway that swallowed the houses of a whole village. I wonder if people would see it as a close enough warning to start adapting and actually fighting the climate change. But nothing seemed to come out of it. Nothing. It seems like no matter how extreme all the manifestations are, nobody is willing to start taking action.

Finally, let’s take a look at the areas the examples shared by participants were related to before and after March 2020. 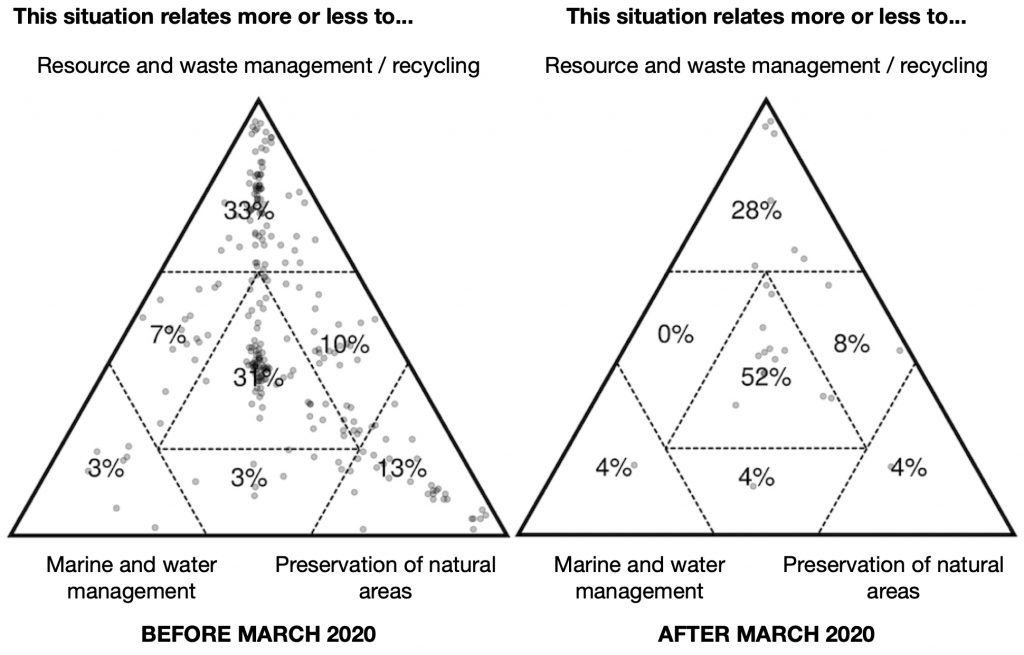 The main movement was away from an exclusive emphasis on preserving natural areas, and slightly away from resource and waste management, and more towards the middle of the triad.

This is an interesting move, especially since many of the “early lockdown” narratives emphasised the positive impact of humans restricting their movements on nature. Participants, however, chose not to focus their stories on that but instead on the increased awareness of connection. Of course, stories of the direct impact of the lockdown are not absent:

Everyone staying home due to Covid – pollution dropped by up to 70% in New Zealand’s major cities as a result.

But even after COVID struck, most stories look at the bigger picture:

This post nearly brings us to the end of the series, and it is the final one looking at patterns around a theme. Next week we will be wrapping up the entire series of posts by looking at some overall observations, new questions, and next steps for the Climate Change programme as a whole.

And as always, don’t forget our ongoing climate change MassSense, which has never been more relevant to this series of posts.

The Acorn Study began in the autumn of 2019. As often happens, most stories were ...

In recent times I’ve been engaged in a series of interesting exchanges with Dr Mike ...