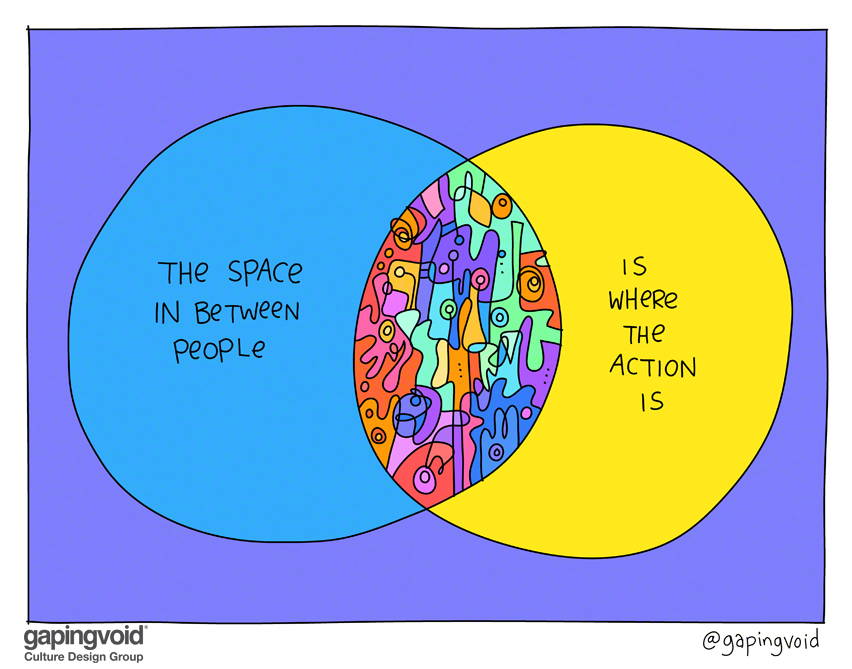 Working in complexity you soon get a sense of which ideas and concepts are causing (sic) people problems.  One is the whole dispositional v causal aspect on which I have written several times, most recently at the end of 2017.  Another equally problematic issue is to get people to realise that how things connect is more important that the nature of the things themselves; especially true when you are trying to change attitudes and beliefs or, god help us all, mindsets.

I think one of the reasons for this is the dominance of individuals, or more precisely social atomism in the anglo-saxon with its change the individual to change the system mantra.  I wrote a lengthy post on this over a decade ago for those who want to dive deeper in to the background.

Another reason is the rapid, and to my mind mistaken, growth of psychometric testing that was an intimate part of the systems dynamics driven change on organisational design of which the likes of Senge were initiators, or rather perpetrators.  Myers-Briggs is now pretty much established as a pseudo-science (if you don’t believe me go and check the literature) but it dominates many an organisation as do various other bits of hokum classifying people into colours and the like.   All of these are about putting people into boxes, seeing your human ‘assets’ as things which can be classified and deployed in the same way as machine tools or spare parts.

In reality who and what people interact with has a higher impact and is a more ethical change mechanism.  It seems perfectly reasonable for an organisation to change the dynamics of interaction between employees, far less ethnical to try and tell them what sort of people they should be.   Years ago I developed social network stimulation as a constraint based approach to self-organising teams, task focused activities leading to behaviour and attitudinal change as an indirect not a direct consequence.  More recently I’ve creating a lighter version of that with the parallel deployment of trios (three people from different backgrounds) to identify solutions to intractable problems.   In all cases we have changed what people call ‘mindset’ not by talking about it, but by doing something that changes people interactions with others and their environments.   Linkages are a type of constraint and its much easier to influence a complex system by constraint management than by agent manipulation and end state definition.

As a side bar, I’d be interested what other complexity ideas people find difficult to get, or to explain – this could be a series

Photo by Puvida Productions on Unsplash

Over the last three weeks I’ve been engaged in a diverse set of projects.  Firstly ...

On an impulse the other day I set up a book club for Cynefin Centre ...