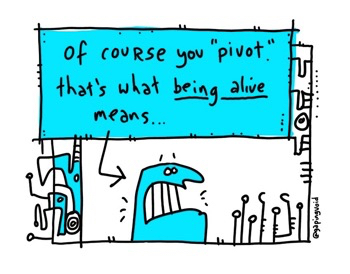 A couple of years ago I coined the phrase Just because you draw a linear process as a circle it doesn’t make it non-linear. It was in the context of a software development conference where a claim was being made that linear iteration with a feedback loop was an example of complexity in practice. Since then I’ve come across more examples of the same thing and one of them which irritates me is the obsession with pivots; hence my selection of this Gaping Void cartoon.

The cartoon makes the point that we constantly pivot in our day to day lives. There is little or nothing special or intentional about it, we do it naturally, in small ways and sometimes, but more rarely and under pressure, in big ways. We try different things and the smaller the experiments the less potential negative impact. We also learn that several small experiments in parallel generally carry lower risk and allow for an emergent plausibility that we could not have anticipated.

So three small experiments in parallel are probably a better strategy than three linear experiments. Especially if you start to believe that three pivots is somehow or another a magical formula for success. There are of course wider issues with Lead Startup (and yes that is what I am talking about). In particular you cannot transfer practices from open markets, where the sheer number of experiments mean that some will succeed, into an organisation with more limited resources and opportunities.

This uncritical transfer of practice from one context to another is a wider issue of course. Shifting manufacturing techniques, such as process engineering, to the service sector were, at best, ineffective. At worst they were a total disaster with negative consequences for people’s lives let alone wider business. You can see the attraction of using simplistic recipes derived from specific contexts. A manufacturing system is a closed system with defined outputs, so it provides a promise of certainty. A market in contrast is open with massive populations and interactions so there will always be a success that can be made retrospectively coherent.

Now a large bureaucracy may have sufficient constraint that you may get repetition. It may also be big enough that diversity and experimentation get hidden within the system. I often joked that in IBM you were only allowed to innovate if it was in the five year plan and more recently I have commented on the irony that the doyens of American Capitalism have adopted the planning cycles of the Soviets. So in a sense in large companies you are de facto acting within a closed system. That means a degree of inventiveness to innovate within constraints; I managed a lot with top cover hidden in larger budgets. This is called intrapreneurship which has a large body of literature and practice that people seem to have forgotten in the lemming like rush for a loose collection of platitudes carrying a smattering of aphorisms (its not all bad).

The lesson of complexity (or maybe something wider, but that is for tomorrow) is to do smaller things in parallel in much shorter cycles with higher interaction and greater diversity. That can be managed in organisations of various sides, but not by imitation of observed success from a different context.

My thanks to Rodrigo Yoshima for reminding me of of a quote from one of ...

I mentioned in yesterday’s post that I was starting to think about the range of ...