Liminal Cynefin, stepping over the threshold 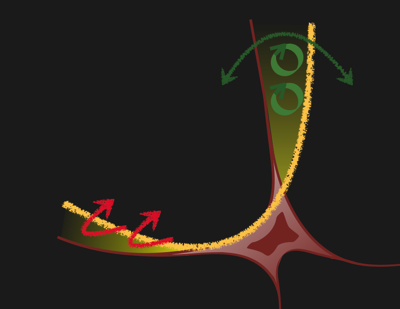 I’ve been frantic the last few months with a lot of long standing wishes and dreams that are all coming together at the same time. The sort of thing that you initially say is the sort of problem you want to have, but when reality strikes one’s view is rather different. More on those in future posts, but part of what I have been doing in idle moments on walks, planes and in the boring parts of meetings is playing with the liminal version of Cynefin. I’ve said before its one of the most important changes I’ve made, and the framework, as people know, has been through many changes.

Part of the power of Cynefin is that it is multi-layered in adoption. It can be used as a simple two by two, and often is when people get started. The five domain model is increasingly used with the need to remind people of disorder and more people are using dynamics – the second classification within the Cynefin eco-system. The essence of a good sense-making framework is that it can be used at multiple and growing levels of sophistication without loosing its original simplicity. So we are ready for the next stage, which builds on both domains and dynamics and to some extend replaces some of the domain models (the three by three matrices for each domain some will be familiar with).

The motivation for the liminal version came from a desire to create a visual representation of the reality of complexity, namely that it is not one state. I also increasingly realised that many of the methods and tools that are valuable in this space (like SCRUM) actually don’t fit within domains but are shifts between domains. Doing some of the background theoretical work on project management I also started to see the boundary between complex and complicated as a a domain in its own right. Earlier posts on this were over complicated as I started to think it through. But a few weeks ago I simply drew a single line and shaded the areas and it all came together. Still some refinement and we will hold a premium member seminar on it shortly so that might be a motivation to sign up! It will also feature in the Cynefin Retreat (only seven places left)

Liminality (from the Latin word līmen, meaning “a threshold” is the quality of ambiguity or disorientation that occurs in the middle stage of rituals when participants no longer hold their pre-ritual status but have not yet begun the transition to the status they will hold when the ritual is complete. During a ritual’s liminal stage, participants “stand at the threshold” between their previous way of structuring their identity, time, or community, and a new way, which the ritual establishes.

I pulled the above from wikipedia in the context of anthropology and while it’s not complete it gives us a good starting point. The reason I called this the liminal view of cynefin is that it introduces the concept of induced and manufactured threshold states between complexity and its two adjacent domains.

The liminal state between Complex and Complicated is the state of increasing constraints to create authentic repeatability that allows for scaling as is. Loosely translated that means that parallel experiments are starting to fuse and produce consistency over time so we can now assume a degree of predictability. In this state we continue to iterate ideas but reduce the parallelism of experimentation in the complex domain. The longer we can hold things year, the lower the risk of premature convergence on a solution (or solutions), but the more time it gets to move from exploration to exploitation. So there a a trade off here, but relatively low risk.

The liminal state between Chaotic and Complex is what some people mean when they talk about the edge of chaos; Reducing the constraints, wearing the connections until a state of randomness is reached. This should not be confused with the complacency zone in the obvious domain which results in a catastrophic collapse into chaos. This is the zone of deliberate movement to create sufficient ambiguity for true novelty to emerge. This is difficult to do in the concrete as old patterns assert themselves to quickly, hence the use of abstraction to prevent that. A body of SenseMaker® and Cognitive Edge methods relate to this and overall its a safe space. The energy gradient is to complexity not to chaos.

More on this tomorrow when I will update the constraint work and then start to cross link back. So consider this a starting post …

Most large companies are prepared to invest in “incremental innovation” but very few are willing ...

I was originally going to move on to post about constraints but a early meeting ...