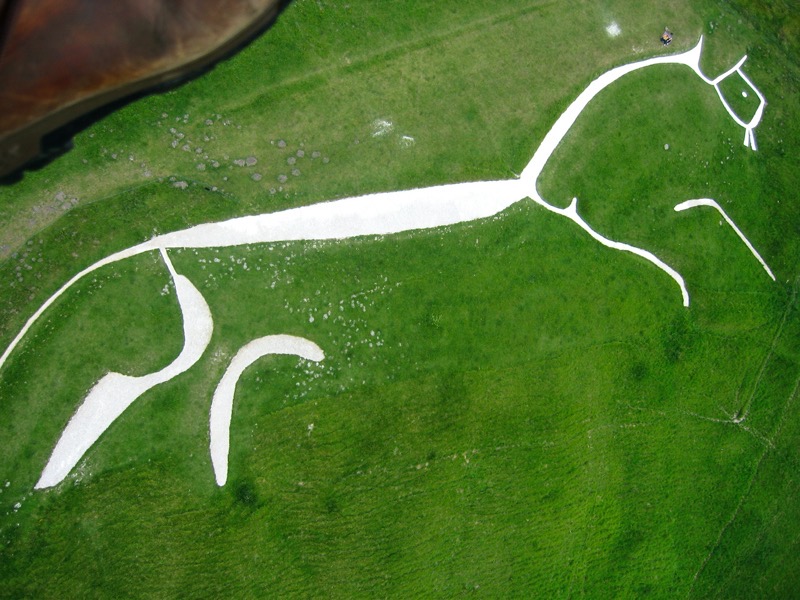 Two days ago I wrote a post that looked at what leadership theory is not indulging my love of language to introduce the word apophatic to a wider audience.  Today  I want to look at the more positive aspects, the positive things we can say, and do, hence the word kataphatic.  But in simple form the last post was what not to do, this post is what to do.  Last time I also chose an image of a static hill fort as the banner, this time something more fluid as understanding leadership is all about constant change with occasional eddy currents and frequent waterfalls.  It carries the ideas of path dependency and irreversibility that are a key aspect of complexity-based thinking so it’s a good metaphor.  I’ve also used another Bronze Age monument, the White Horse of Uffington which is just along the Ridgeway from Barbary Castle and has a wonderful fluidity to it, it captures the essence of a horse but leaves an element of mystery.  it is also a symbol of power and mobility and that is significant in itself.

That question of mystery is deliberate and one reason for picking up the theological references.  On the negative side, the vision of the leader as the great patriarchal magician is all too frequent in politics and industry alike but otherwise, there is an ineffable quality to leadership and considerable ambiguity about what it is and what it means.  We all know it exists, and we all agree, to varying degrees, that it is either necessary or inevitable.  What is clear is that is no recipe either for leadership or for leaders.  But there are things that we can say and do which will make a difference.

A couple of days before Christmas I revisited my ASHEN perspective question which is a part of knowledge management and in the second post used it to take a look at leadership.  Specifically, I looked at the need for experience with a reference to the development pathway I had to take to be a General Manager.  That post is hereby incorporated into this one, including its criticism of maturity models in leadership development.  Also the final post where I raised some issues with more common approaches to leadership and organisational development.  I promised then that I would return to the theme of leadership and this post and its predecessor are a part of that.  But I want to add to those earlier posts, rather than repeat them so if you are not familiar pop back and take a look.  If you want a list of various leadership capacities by the way then head for Table 7.1  of The Flow System (Forward by yours truly and lots of good stuff on complexity and Cynefin) which is a comprehensive and daunting list compiled by John Turner.  The sheer volume of the necessary capacities demonstrates in part why I suggested leadership has ineffable qualities.  No one person could possess that in whole, or in substantial part, but yet we still have leaders.  Attempts to remove leadership, such as Holocracy end up in the type of bureaucratic inertia that was so well described by Ursula Le Guin in The Dispossessed.

Now all of those need expansion and I will be picking aspects of them up from time to time.  But I have also written a lot over the years on this subject.  A search on the website will give you more material.  But you might want to take a look at this post, which also has the advantage of being illustrated!  That did focus a little more on the individual than I have here.  So that is it for now, tomorrow I want to talk about resilience.

The banner picture is of the Bhatinda waterfalls in Jharkhand, India by Bitan Basak on Unsplash, the image has been trimmed to fit a 1240 by 450 px slot

Almost every SenseMaker collection, no matter what it is, contains some garden-variety multiple-choice questions. These ...

This is a two-part post.  Today I want to establish the context by talking about ...