After gaining my 50k steps yesterday I had nothing more strenuous planned for today than a leisurely drive up to the University of Warwick, an overnight stay and then my son's graduation tomorrow.  Given that I fly out to Singapore early Tuesday morning today was also the only time to sort out various domestic duties, printing and signing contracts etc. etc. so the final departure was late and somewhat stressed as a result.  The world is divided into two types of traveller.  The first are those eminently reasonable people who leave departure to the last minute and arrive just in time, or at the worst fasionably late.  The second arrive early, leave safety margins and generally get stressed when they are married to type one, and such feelings are fully reciprocated.   Unfortunately, or you might say typically as opposites do attract; my wife has type two tendencies, I am an exemplar of type one.

There is a family history here.  My Uncle David in WWII would assume he could party to the last minute but something always worked out to get him back to his ship before he was on a charge as a dissenter, his brother Hugh would plan the whole thing with plenty of safety margin then would be subject to train breakdowns and other failures which got him into trouble.  At least that is the story I was told, and I've held it up to critics ever since.  To return to the day, I decided it was better not to use the David v Hugh story (it has never worked in the past) and instead diverted conversation to The Archers, a sure fire way of engendering mutuality of interest and perspective; we both hate the new editor who is betraying his background in plot lines for East Enders.  That put things into a better mood and we ended up stopping near Burford of lunch. 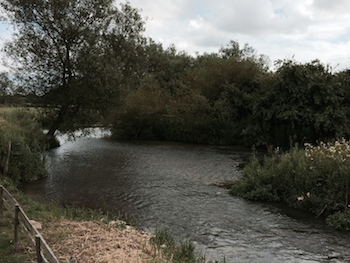 I had chosen The Swan at Swinbrook which is along time favourite.  I had also booked a table for two.  One favourite tactic of type one travellers is to ensure that whoever you are meeting has some commitment to tolerate you being late.  A good example of this is checking in baggage at a city office gives you another twenty minutes at the airport while they frantically call for you before they finally commence unloading.  I first found this pub back in the eighties.  We were having one of our traumatic management meetings (there were a few of these) and all of us business managers sought refuge here from our General Manager.  He had booked a meeting room over a hair dresser's saloon with all the consequent smells and noises, not only that we were in the lowest of the low B&Bs to save money.  The general pattern of meetings was open discussion for a couple of days, followed by a check on how close we had come to what the said General Manager had already decided.  Either way we knew this was coming so we found two pubs with the same name but different locations.  The first was to the west and we gave the GM that address along with one of his direct reports who seemed to like the management approach.  The rest of us walked through the country to Swinbrook which is to the east and and a great time waiting for him to arrive.  These were the days before mobile phones as well so such decel=ption was easier.

Either way, if you ever get a chance divert to stay here, or eat here, or drink here or any combination thereof.  If its sunny sit in the garden (pictured) or walk over the bridge and watch cricket on the green.  The cotswolds is full of good pubs but this is one of the best, and has been for over three decades now.  That takes something.

It's being four years coming and the final result was not without its last minute ...