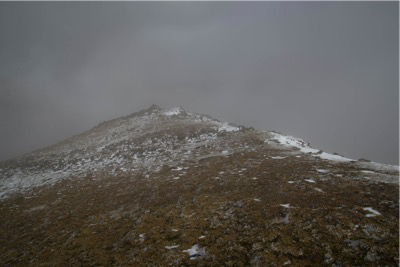 For many years walking in Snowdonia was a regular weekend activity. The drive through Ruthin and then the Clocaenog Forest has many a fond memory. Also sitting around the boot of the car eating potatoes cooked and retained in the pressure cooker wrapped in my father’s war time duffle coat. But in those days we tended to return to the major routes. Since I returned to fitness a few years ago I have returned to those routes, but also started to seek out the peripheral hills and routes that we ignored as a family.
Yesterday the weather was bad and I had multiple meetings at the University but today I determined to go regardless and chose Moel Hebog.

The mountain sits to the south of Snowdon itself and it is prominent. I chose to climb it from Beddgelert and then thread along the ridge to the north for as long as I had time. After a short walk in the route is unrelentingly up with some mild scrambling. But the route is clear, the ground clean and the views opening up in all directions stunning. The top was under cloud cover and still subject to frost although I had that wonderful ghostly light that comes from the presence of the sun which I captured in part in the photograph above. After that a slippery downwards path led to Bwlch Meillionen, the views improving all the time. I just had time to make Moel yr Ogof (and Owain Glyndwr’s Cave) before heading down a charming forest track and then a cycle track back to the car. Descending Moel Hebog I saw a strange site of dogs streaming up the hill from Cwm Pennant. On the forest track I met (and was accompanied for some miles) by three apparently ownerless beagles. The only other clue was a group of mainly elderly gentleman dressed in various upmarket shooting gear but only armed with binoculars. If anyone can help by suggesting what this was about I will be grateful.

Either way, one more of the peripheral hills done (and I previously added Elixir Fawr to that list) there are a lot still to collect!

It is fashionable in systems thinking and complexity circles to use Scientific Management as the ...

Wedding anniversary today and whilst I am away I did at least remember the flowers. ...